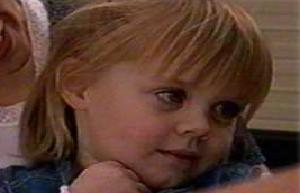 Rachel arrived in the Bay from the city, with her mother Kylie. They returned back to the city shortly afterwards though, as Kylie felt Jesse didn’t do the things Rachel wanted him to do.

Kylie changed her mind and let Rachel stay with Jesse for a while. It was revealed a couple of years later that it was around this time Kylie was involved in the hit and run. Jesse’s girlfriend Selina, bonded and got on well, though when Jesse cheated on Selina with Chloe, it was briefly Chloe that played the role of mum to Rachel, though Rachel always appeared more fond of Chloe. On one occasion when Chloe was looking after Rachel she fell of a wall hurting her knee, leading to Jesse chastising Chloe for not looking after Rachel properly.

Selina and Jesse soon got back together, but it still wasn’t smooth sailing as a trip to the zoo almost turned into disaster when Rachel fell into the crocodile enclosure.

Kylie returned though and succeeded in getting custody of Rachel. Soon after Jesse tried to abduct Rachel from Kylie, however Selina talked him out of this plan of action

As if she hadn’t returned thousands of times already, Kylie came back again so that Rachel and Jesse could see more of each other. Jesse and Kylie rekindled their love for one another, and decided to get married, partly because it would improve the grants they would get. Kylie was arrested on their wedding day and sent to prison, for 6 yeasrs, for a hit and run she had commited.

One day, Alf and Ailsa took Rachel to the mall, where two boys led her off and took her home, hiding her in their treehouse. This launched a search for Rachel. Whilst driving around, Alf recognises the two boys on the video and chases after them. After speaking to the mother, the mother denies the kids would do such a thing, but she later finds Rachel and they come over to apologise to Jesse.

When Kylie died of a drug overdose in prison, Jesse had to look after Rachel as a single parent.. Jesse started doing dodgy deals at his garage, causing him to run away from the police leaving Rachel to be cared for by the Nashes. When they first moved in with the Nashes, Rachel got on well with Tom, Natalie and Gypsy, however not with Joel, causing her to run away back to Vinnie’s house. However when Joel dug out Gypsy’s old bike for Rachel, Rachel began to like Joel more. When Natalie fell pregnant to Glen in early 2000 and the Nashes briefly split up, Rachel lived with Natalie in Queensland though they were joined by Joel later in the year when they got back together.

He eventually returned back to Summer Bay to look for Rachel. After finding out that she was living in Queensland, Jesse made a promise to her and said that he was going to do everything he could to make them a family again.

Will Smith, often looked after Rachel and brought up the topic of adopting her. At first, Jesse wasn’t happy about Will’s decision but came around and signed the adoption papers. Jesse knew that Rachel would be better off with Will and Gypsy.

Rachel’s kidnapping episode was dropped in the UK due to similarities with the James Bulger case in 1993.