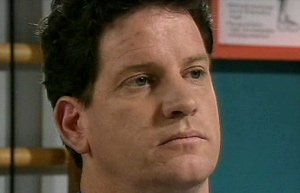 Rick was one of the surf club gym members and an acquaintance of Jesse. He arrived at the gym just after Jesse had left Kane in charge and explained he wanted to renew his membership for the year. Kane didn’t know where the forms were so Rick asked him to just take the money and give him a receipt, saying they could sort out the paperwork later.Kane did as he asked but then pocketed some of the money Rick had given him. When Jesse noticed the shortfall, Kane tried to suggest Rick had conned them but Jesse soon realised the truth.