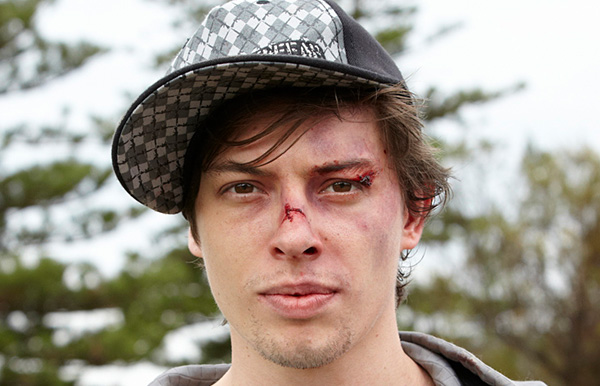 Harman “Hammer” Pirovic was the younger brother of Jake, who took charge of his gang while Jake was in jail. When Heath was released from jail in exchange for giving evidence against Jake, Hammer confronted Brax about it. He and some of his gang later exchanged words with Brax, Heath and Casey, then confronted Heath when he was alone and beat him up. Brax went to see Hammer and tried to convince him to leave it at that but Hammer told him that he wanted Heath dead.

Heath vandalised Hammer’s car and Hammer retaliated by stealing Heath’s car and torching it. He and his gang met Brax and the River Boys on the beach for a fight but they were dispersed by Charlie and Avery. Hammer’s gang then abducted Stu Henderson, who had taken part in the vandalism, and dumped him on Brax and Heath’s doorstep with his River Boy tattoo gouged out. Hammer was pulled over by Charlie and Georgie who found improvised weapons in his car; this resulted in all three of them missing a brawl between the River Boys and Hammer’s gang at the surf club.

Shortly before she died, Tegan Callahan told Hammer that Brax and Charlie were together and Brax had given the tip-off that led to Jake’s initial arrest. Hammer and Jake interpreted this as meaning Charlie and Brax had conspired to get Jake locked away. Hammer told Brax he was going to kill him but Jake wanted Charlie to die first. Brax responded by giving Hammer a beating, only stopping when Heath pointed out there were witnesses. Hammer refused to talk to the police about his injuries. Charlie then suffered a minor injury from a shot fired from Hammer’s car, being saved by Brax knocking her to the ground, but Hammer was at the police station at the time reporting his car stolen. Hammer went to Brax and told him he would leave him and Charlie alone if the Braxtons left town.

Hammer and his gang attended Tegan’s funeral but left early after receiving news their base had been set on fire by Casey. The police attending the fire found them trying to hide guns and dope, while the gang member who had shot Charlie was arrested after a tip-off from Cheryl. Hammer repeated his offer to Brax but then kidnapped Charlie and took her to a shipping crate, using a call from her phone to lure Brax to them. Brax turned up with a gun but Hammer overpowered him and forced Charlie to tie him up. He planned to kill them both and make it look like Brax had killed Charlie and then himself. Charlie jumped him as he was about to kill Brax but Hammer seemed to come out on top in the struggle, again pointing a gun at Brax. However, Charlie managed to retrieve the discarded other gun and shot Hammer with it before he could fire, killing him.