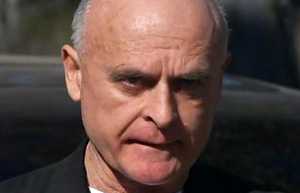 When Peter Baker ‘returned’ after being in witness protection, Dennis Gillan wanted revenge. Peter and detective Clare Brody had been working on a case related to Dennis and his family for over a decade. Gillan and some of his family went to jail after being caught for shipping drugs. A few months after being sentenced and put in Jail, Dennis’s wife was killed by one of the many enemies they had made there. That was the reason Gillan wanted Peter to pay, he held him responsible for his wife’s death.

Peter told Drew whilst in the barn just after he had come back, that there was a leak in witness protection. For months Drew Curtis had been targeted as a way to bring Peter out of witness protection. Dennis got parole just before the explosion at Jack and Martha’s wedding which is why Peter’s superior wanted him to go into witness protection as they feared he was after him.

Drew had just found out that Peter was still alive and was understandably, shocked. When Peter took Drew just after getting out of witness protection, Dennis Gillan and some of his ‘friends’ were behind him and saw the whole thing, so Peter told Drew that they needed to get away before they found them. They managed to get out, but before long Gillan and his men had arrived.

Peter told Drew to get away as fast as possible as it was clear that Dennis wanted to get back at him and not Drew. Drew ran off. A couple of seconds later, he heard a gunshot. He could only think of one thing…that his father had been killed.

But when Sergeant McGrath went to investigate the barn, he found Dennis…he was dead!