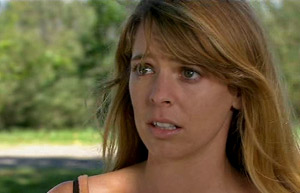 A member of the Believers, Charity was first seen with Jonah when Tasha invited them to have dinner with her, Robbie, Jack and Martha. During the meal, they explained about their belief that people should learn right from wrong themselves instead of having it forced on them by authority and seemed to partly win Robbie over. Charity made background appearances in a number of subsequent Believer scenes, being present when Robbie tried to show Tasha the Believers’ shrine and in the aftermath of the cyclone, claiming their camp had been saved by prayer and annoyed that Robbie offered a scientific explanation. She later caught Robbie trying to sneak into Momma Rose’s tent. Tasha spoke to Charity after kissing Jonah, saying she’d enjoyed it but felt guilty about Robbie. Charity suggested she needed closure but was worried when Tasha subsequently disappeared until she turned up saying she had cut all ties with Robbie, Irene and the others in the Bay.

Charity was later seen standing guard over Martha when Momma Rose took her prisoner after she found Rebecca and was responsible for keeping her drugged. She told Jonah what was going on to keep Tasha away from the shed where she was and sent Jack a text message supposedly from Martha to keep him away. She was upset with Jonah, who was unhappy with the situation, ordering her around, reminding him she came to the Believers to get away from that. When Martha escaped, Charity probably had a hand in moving Rebecca before the police could find her and was seen among the crowd protesting when the police took Jonah away for questioning.

Charity was later seen helping hold Tasha prisoner and stopped Jonah being alone with her, sensing that his sympathies were wavering. When Tasha got out of the shed, Charity tackled her to the ground and correctly guessed Jonah had given her the key, telling him she would inform Momma Rose. She was present when Momma Rose ordered both Tasha and Jonah cleansed with fire but, along with the other Believers, was easily swayed by Tasha’s reminder that she was supposed to be the Chosen One, even threatening Momma Rose with a flaming torch. Shortly after, she was seen being led away by the police, protesting that they hadn’t done anything wrong.

When Robbie found out Tasha was pregnant, he went to the prison to confront Jonah but instead ran into Charity outside. She explained she had been in counselling after Momma Rose had kept her drugged and brainwashed and that both she and Jonah now regretted everything they had done. She confirmed that Jonah had raped Tasha and also revealed it was Josh West who had got rid of the evidence that would have proved Martha had been held captive.

When Momma Rose(Florence White) later kidnapped Tasha to force her to give birth, Charity was dragged into the room and told to act as midwife. She confirmed Tasha’s claim that a natural birth would kill her and she needed a caesarean and did her best to keep her calm. After they were rescued by the police, she was seen briefly at the police station, telling White as she was led away that she hoped she went to jail for a long time. Robbie later went to Charity for help when Tasha was having difficulty looking after Ella. Charity suspected Tasha had mild post-natal depression and helped her to bath Ella. When she was called away to the hospital to attend a birth, she left Tasha looking after her alone. She apparently returned to the beach house and found Ella alone, taking her to the hospital. She persuaded Irene not to be too hard on Tasha and apologised for leaving her alone with Ella when she wasn’t ready.

Charity turned up at the beach house a few weeks later while Irene was looking after Ella and explained she had been away visiting family. When Irene received a call saying one of the Diner workers was sick, Charity offered to babysit while she covered for her. However, the call was a ruse and Charity took Ella to White, who she had apparently been working for all along. She was sent out to get some baby supplies but quickly picked up by the police. She remained silent while Jack and McGrath interrogated her so Irene offered to speak to her. Irene gently told Charity that White had taken advantage of the fact her mother never loved her and had now abandoned her. She then reminded her that she’d been a friend to Robbie and Tasha recently, suspecting that deep down that was the person she wanted to be and that she knew Ella belonged with her mother. Charity broke down in tears and told them where Ella was. It seems likely she faced charges for her part in abducting Ella but her exact fate was never revealed.