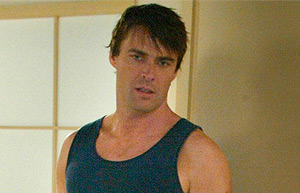 Marc arrived in Summer Bay in the aftermath of the bush fire at the start of 2005, where he was reunited with Josie at the Diner. The two of them had been at school together and dated and there still seemed to be a spark between them. Whilst helping with the clear up operations, Marc came across the body of the real Zoe McCallister, at around the same time that Matilda and Henry did. Meeting up with Alf and Jesse as a result of the incident, he went for a drink with Jesse and explained he was on leave from the fire service after a blaze killed three of his friends.

Marc went to see Josie at Noah’s Bar and suggested she still had feelings for him. Although Josie denied it, they ended up sharing a drink after hours and then sleeping together in the bar. She was shocked when she later found him with Jesse at their flat but Marc explained that he had arranged to go rock climbing with him and thought it would have been suspicious if he hadn’t turned up.He also made it clear that he didn’t want their encounter to be a one-off.

While Marc and Jesse were on their trip, they found a panicky Tasha on a cliff top, telling them Robbie had jumped into the water below. Jesse jumped in after him only for Marc and Tasha to find Robbie hiding nearby, saying he had only pretended to jump for a joke. When Jesse nearly drowned as a result of the incident, Josie realised she loved him and told Marc nothing else was going to happen between them. The rejection seemed to cause Marc to snap and he told Josie that he wasn’t going to let her use him and discard him like “the others”. He invited himself round for dinner and spent the meal alluding to their night together. He then told Josie if she didn’t give him $20,000 he would tell Jesse what happened and also tell Tasha about her history as a brothel madam. Josie reluctantly paid him the money and was horrified when instead of leaving town he used the money to rent a flat in the area. He turned up at Jesse and Josie’s engagement party and told her he expected regular payments to keep quiet.

When the charter flight carrying several Bay residents crashed in the bush, Marc again made himself look like a hero by helping out with the rescue efforts. Soon after though, he was visited by an old girlfriend, Heidi, who reminded him he still owed her money. Josie saw the exchange and Heidi explained to her that when she broke up with Marc, he found out about something in her past and started blackmailing her, until she discovered Marc’s own secret, that he had slept with a minor. Josie went to Marc and told him she would reveal his secret if he didn’t leave town. However, Marc paid Heidi off, leaving Josie without any evidence, and then did some digging and found out about an incident involving Josie that happened in 1989 (later revealed to involve the suspicious death of one of her clients).He demanded further payments from her and also that she give him a job at the bar.

Robbie accidentally videoed Josie and Marc arguing and Tasha quizzed her about it, forcing her to admit that they’d slept together and that he was blackmailing her. Tasha and Robbie agreed to keep quiet but then the tape was stolen and turned up at Jesse and Josie’s place with Josie narrowly intercepting it before Jesse saw it. She confronted Marc about the incident, accusing him of being the Summer Bay Stalker, but he told her he was having dinner in the city with a friend at the time and pointed out that if Jesse found out about them he wouldn’t be able to blackmail her any longer. He continued to play games with the pair, organising Jesse’s bucks party when Flynn was busy elsewhere and “joking” that he had slept with Josie. He attended the wedding, expecting it to guarantee a continuous supply of money for him, but instead Tasha halted the ceremony, running off in tears, and Josie was forced to tell Jesse what had happened. Marc dropped the pleasant fa