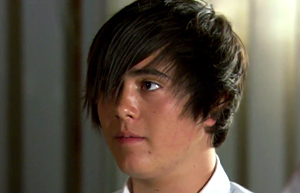 On Tony Holden’s first day back at Summer Bay High, he had to teach a class about STIs. Corey, one of the boys in the class, mockingly asked if Tony was an expert on them. When Tony tried to play a documentary on the subject, Corey, who had purloined the remote control, repeatedly paused it until Tony realised what he was doing and reclaimed it, with Corey saying that it looked like Tony needed help.

Miles told Tony that Corey was a smart kid with issues, who had been transferred from Yabbie Creek after causing a scandal, and advised him to give him a taste of his own medicine. When the class reconvened, Tony told Corey to take the lesson. Corey found himself floundering with nothing on the blackboard and no-one laughing at his jokes. Tony suggested he play the second part of the DVD but Corey found the remote missing. He retrieved it from Tony but it failed to work since Tony had removed the batteries. Tony complimented him on his earlier joke but warned him that if he tried it again he’d be out of the class, although Tony would prefer for him to stay. Corey silently returned to his seat and Tony resumed the lesson.