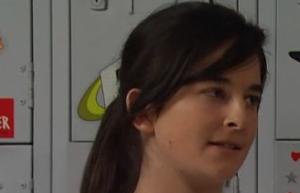 Emma was first seen with a friend at Hayley and Robbie’s joint birthday party. The pair were approached by Max and Henry who attempted to chat them up, with all four of them making out they were older than they were. Later, Emma spoke to Max alone and they admitted they were both fourteen. Emma explained she went to school at Yabbie Creek and invited Max to dance, only for him to rush away to throw up, the result of drinking spiked punch. By the time he recovered, Emma was busy kissing Henry.

Emma apparently transferred to Summer Bay High since she was next seen as a student there four months later. She would make fleeting appearances over the next few months, usually in the company of Matilda. Perhaps her most amusing appearance was when, after seeing Josie visiting Tasha at school, she rushed into the office to tell Sally that Angie Russell had come back from the dead. (Presumably Angie’s reputation was such that even students who weren’t at the school the previous year knew what she looked like.) She was somewhat bewildered by Matilda’s belief that she and Kim were soon going to get together and took part in Robbie’s brainstorming session about a tribute for Noah. She brought the news that Ric had been found beaten up (information she apparently got from a sister Ric doesn’t seem to have…) and was later seen gossiping with Matilda when Ric was beaten up again and his father found dead.

Emma was given a bit more screen time when she and Matilda sneaked out to a club to see Ric and Wazza. Emma seemed to fit in well, drinking alcohol and making out with Wazza, leaving Mattie worried she was being left behind.Emma later unintentionally rubbed salt into Mattie’s romantic drought by being too busy with Wazza to hang out with her although she was on hand to provide her with encouragement when she developed a crush on Diesel.

After that, Emma wasn’t seen for a long time although when Matilda spent the night with Ric on Alf’s boat she told Beth she was staying over at Emma’s. She finally reappeared shortly after Kit’s departure when she and Matilda started hanging out with two surfers, Reuben and Bondy, who were passing through town. She helped Matilda arrange a party with them at the caravan park house and, after Matilda left the party in tears when Ric caught her and Reuben nearly kissing, joined Ric and Cassie in following her home to check up on her only for Matilda to ask to be left alone. When Matilda later skipped town, Emma told Ric and Cassie that she might have gone with Reuben and Bondy to Sandy Bay.

A month or so later, Emma felt ill at school and Matilda, Cassie and Lucas elected to take her home themselves instead of telling someone, earning themselves a detention for failing to turn up to a meeting Donald Fisher had arranged for Year 12 students. The following week, Emma turned up at Matilda’s flat and admitted she’d slept with Bondy while he was in town and was afraid she was pregnant. Matilda went with her to get a test which turned out to be positive. Emma didn’t feel able to cope with the news and insisted they go to school for an exam instead. During the exam, Matilda noticed Emma was struggling and, having already completed the test, swapped papers with her and did hers as well. She was shocked when Emma then revealed she had got in contact with Bondy and was leaving town to meet up with him. Sally later told Matilda that they’d got in touch with Emma who had agreed to return to Summer Bay and bring up the baby with her parents’ help.

Emma’s surname was given as Jenkins during her 2007 stint.