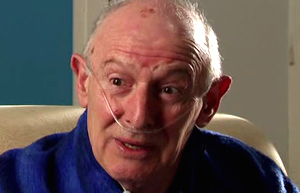 Arthur asked for his wife, Enid, to get Belle to visit him in the hospital as he had some important information about the development site. When Belle arrived he told her that the developers must be stopped as he knows that there was toxic material buried in the landfill. He said that he worked for the council in 1965 and he was there when the stuff was dumped. He went on to say that the council was in huge financial strife so they took up a company’s offer to get rid of the waste no questions asked and as it was listed as general landfill there was no proof that anything untoward had happened. However, he said the receipts were in the council archives somewhere.

When Belle asked why he hadn’t spoke out about the risks to the public before he said that at the time he was told that there would be serious repercussions for anyone thinking about blowing the whistle. Belle asked him if he would be willing to talk to the police about it and Arthur agreed.

Belle returned later with Angelo to take a statement but was told by Enid that Arthur had suffered a stroke and only had a day or so left to live.