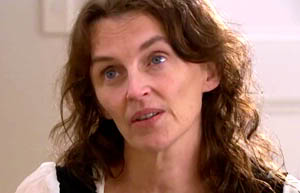 Bonita was the wife of Orson, Donna DeBono’s Gardener. When Donna returned from prison she was contacted by Bonita who said she had some information about Lou DeBono’s murder. Donna went to see her the next day with Irene and she told them that after Donna was arrested, Orson said he had come into some money from a long lost aunt. However, Bonita said that Orson admitted to her the previous evening that he was bribed to keep quiet about a man breaking into Donna’s guest house and planting a gun. Orson was terrified so kept quiet about it despite Donna going to jail for the murder. Bonita said she didn’t know where Orson was as they had a huge argument about it. Later the police arrived and Bonita told the whole story to the them but said she still didn’t know where Orson was. Donna was sceptical and thought that Orson might have been the one to plant the gun but Bonita said there was no way Orson would have done that.