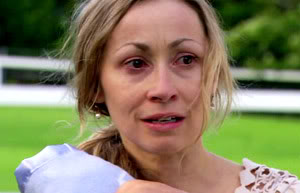 Jane, who was heavily pregnant, first appeared at the hospital with her husband Rex as she was suffering from cramps and vomiting. Rachel treated her but due to beds being unavailable in maternity she was left on a trolley in a corridor. Jane needed to go to the toilet so Rachel asked Julie to get her a bed pan. Rachel also told Jane that she would listen to the baby’s heartbeat and get her an ultrasound as soon as she could as she had to rush off and tend to another patient.

When Rachel returned to examine Jane, the trolley was empty and Jane was gone. Rachel and Rex searched for Jane and found her slumped in a corridor in immense pain so they immediately rushed her up to maternity. Later, we found out that Jane’s baby was stillborn and they thought the baby had died before Jane arrived at the hospital.

A few weeks later, Jane was at the hospital again for an appointment. It coincided with Harry’s birth and an upset Jane watched from the corridor as Rachel and Tony cooed over their newborn son.

Not long after, Jane and Rex decided to sue Rachel for negligence. A hearing was arranged at the hospital and while they were there, they bumped into Rachel and Tony with baby Harry. Jane was clearly distressed by this so Rex led her away. She later overhead Rex talking to Tony but again, Rex led her away and said nothing was going on.

A week later the committee decided there was no case to answer to and despite Jane being inconsolable she agreed to abide by the hospital’s findings. However, Jane was soon found spying on Rachel’s house but Rex talked her into leaving. Later that day, the Avents turned up at Rachel and Tony’s house to let them know there was no bad blood between them and they were not blaming Rachel anymore. However, Jane couldn’t take her eyes off Harry the whole time and Rachel was disturbed by their visit. Later that day, Jane watched Tony and Rachel in their garden having a barbeque and then when it was dark confronted Rachel outside the house, telling her she was overbearing and a bad mother. Rachel told Jane to stay away from her family or she would call the police.

Rex and Jane then seemed to turn up wherever Tony or Rachel were so Tony decided to confront Rex. Jane remained tight lipped but Rex denied that that was the case and said that they were just minding their own business. Later when Rex apologised to Tony he confessed that Jane admitted to going to their house and hanging around the Surf Club because Tony worked there. He said he didn’t know what to do to help Jane.

Soon after, Harry was kidnapped and Rachel immediately suspected Jane. The police called around to the Avent’s house but Jane wasn’t there. Rex said that Jane wouldn’t steal someone’s child and wanted them to leave. Jane then arrived and denied any knowledge of what had happened to Harry. Jane was taken to the police station for questioning. Jane said that she was hanging around Rachel’s house to try and find out why her baby died. She said that she shouldn’t have gone around to the house and was wrong to say Rachel was a bad mother. She said she could never take Rachel’s baby because she knows what it’s like to lose the most precious thing in her life. As the police had no evidence that Jane was involved they told the Avents they were free to go.

Rachel refused to believe that the Avents weren’t involved so she broke into their house in the middle of the night. Jane wasn’t there so Rex argued with Rachel and told her that Jane had not taken Harry. Rachel said that Jane was having a psychotic episode and was capable of anything. Just as Rex asked Rachel to leave, Jane turned up, saying that she was just getting ready for bed. Rachel immediately confronted Jane but Rex dragged her off her just as the police arrived.

The next day Rachel was giving out flyers on the beach and asking people if they’d seen Harry. She bumped into a woman who said that Rachel had rented a cottage off her. It was then clear that Jane was the one who had rented the cottage in Rachel’s name and that was where Harry was. Rachel immediately rushed there and found Jane leaving with Harry in her arms. At the same time, Charlie and the police arrived and tried to get Jane to give Harry back. Jane said Rachel was an unfit mother and that she loved Harry more than Rachel did. Charlie tried to reason with Jane and told her that she knew what it was like to lose someone you love but what she was doing was wrong. Eventually Jane handed Harry back to his mother and she was led away by the police.

Later, at the police station, Jane just stared into space. Rex said he had no idea that Jane was so sick and apologised for everything that had happened.