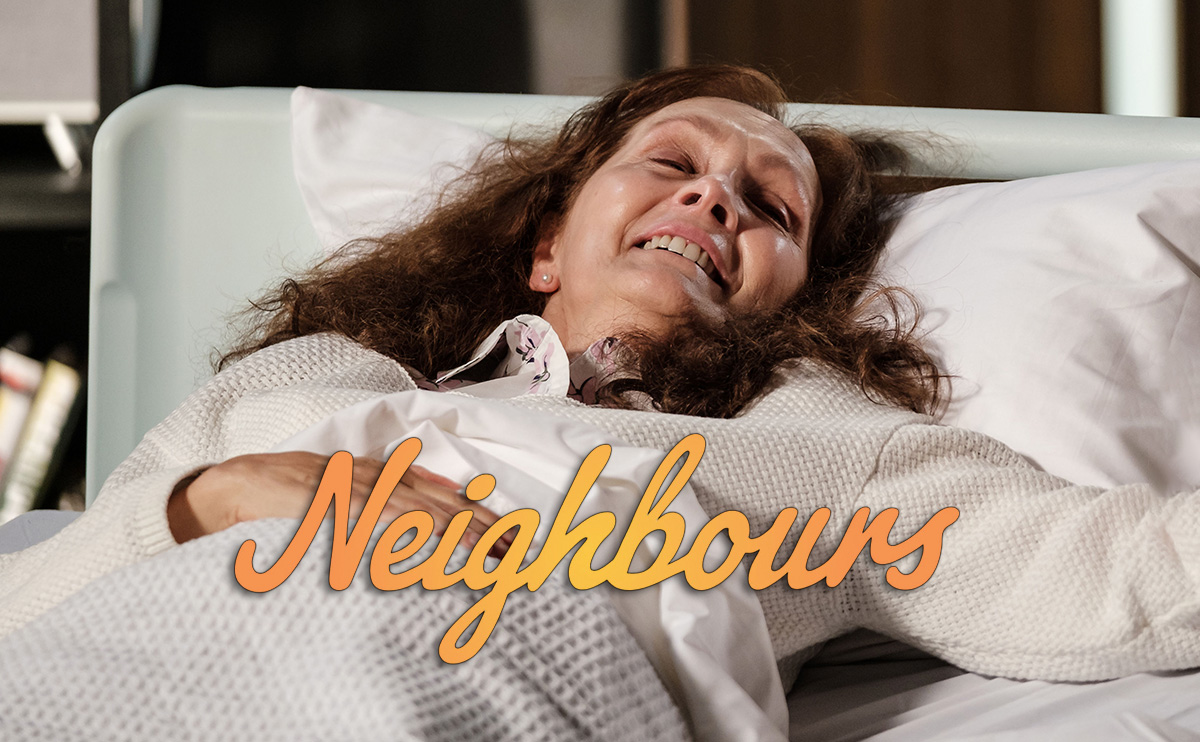 Coming up on next week’s Neighbours in the UK, Fay Brennan’s time on this earth comes to an end as she says an emotional goodbye to her children. Meanwhile, Shane & Dipi Rebecchi decide it’s time to face their fate.

These episodes will air from Monday 5th April. 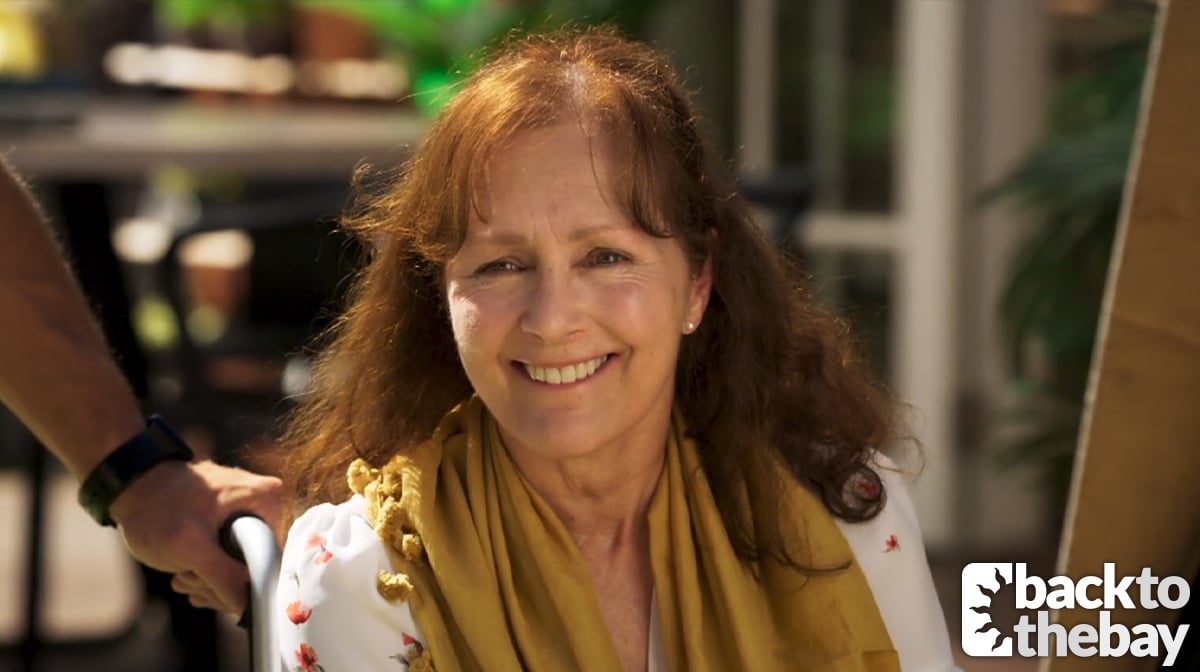 Almost two years on from her Huntington’s diagnosis, Fay Brennan has finally come to terms with her mortality. She’s spent the last months of her life living close to her four children – something she had not done for many years – and has savoured every minute with them.

She was able to see Mark, Aaron and Chloe all marry their respective partners, as well as meet her first grandchild, Freddie, son of Mark and Paige.

Now, back on Ramsay Street, Fay knows that the end is nigh and she has every intention of making her final hours on this earth special. 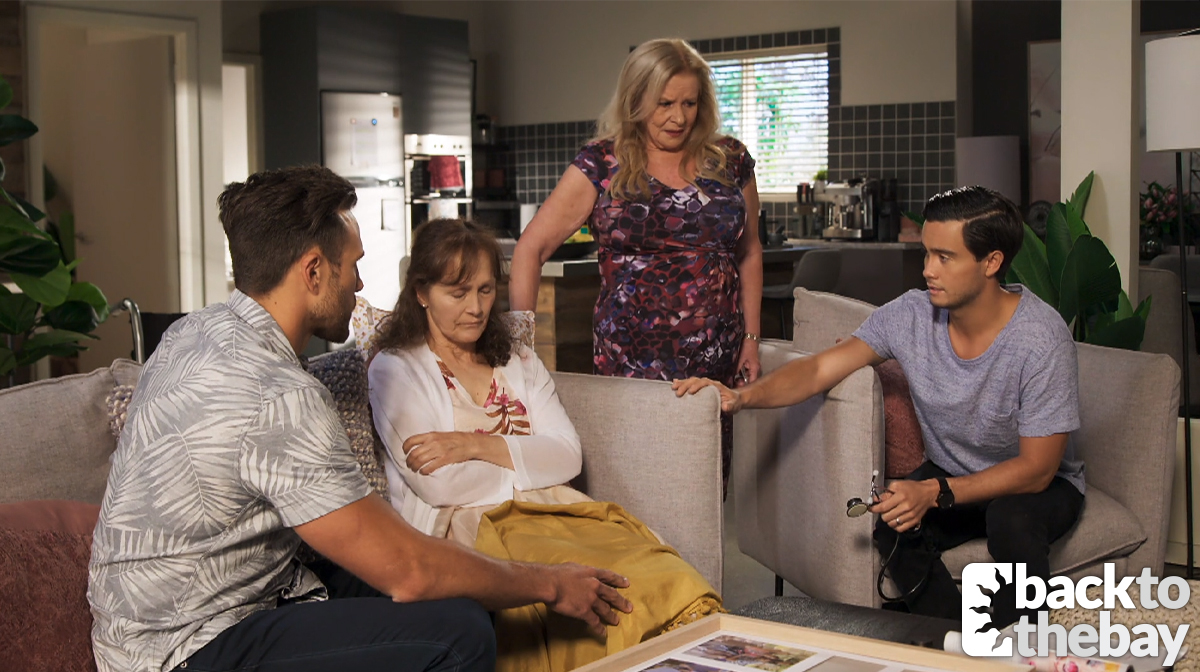 After an appointment with Dr Clive, who revealed that she had an infection that would likely end her life within the next week or so, Fay made the decision not to tell her family the truth. However, when Sheila caught her coughing up blood, she was forced to reveal all.

The infection was caused by a tiny piece of chocolate that Chloe let her taste. She inhaled a small piece, leading to aspirated pneumonia. Fluid is building back up in her lungs, meaning Fay does not have much time left. The Brennans are stunned when it’s revealed that she may only have a day at most, leaving them with no choice but to start palliative care. 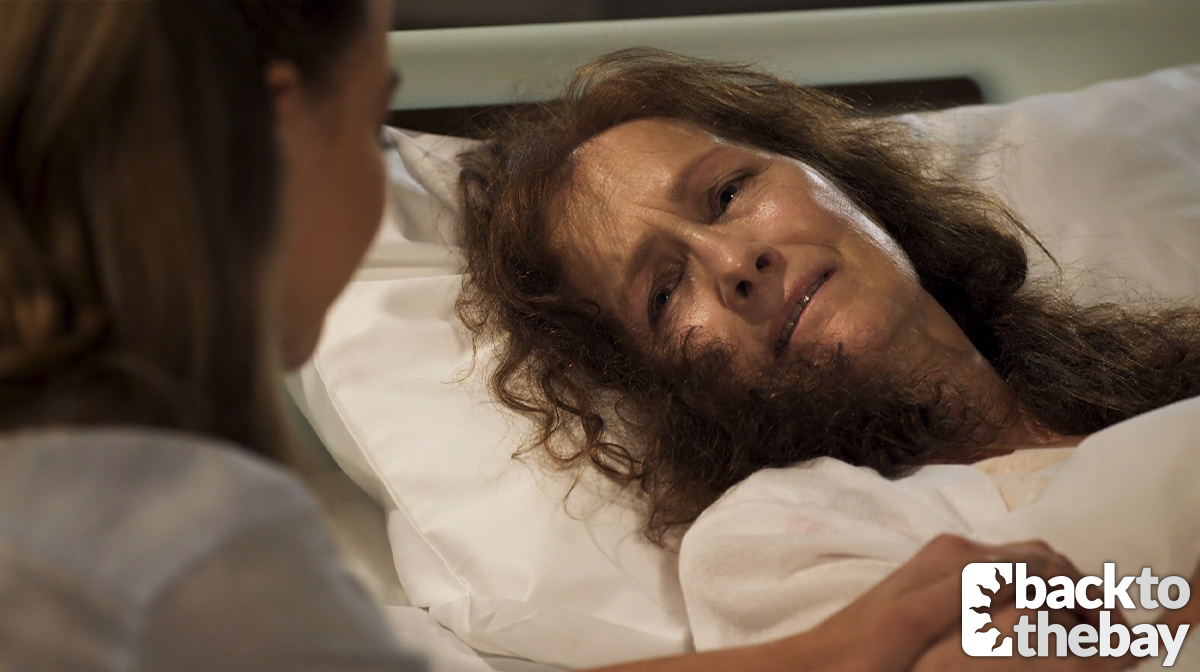 That night, Nic makes Fay comfortable. Chloe is the first to take care of her mother, and the pair reminisce about the events that have happened over course of their life. It’s a loving moment between mother and daughter that Chloe will cherish forever.

Meanwhile, over at No. 32, Aaron breaks down in David’s arms. He is not ready to say goodbye to Fay, especially so soon. He’s also struggling with Fay’s reluctance for them to contact Mark and Tyler. But deep down, he knows that her wish is for them not to see her in such a bad way, and so he abides. 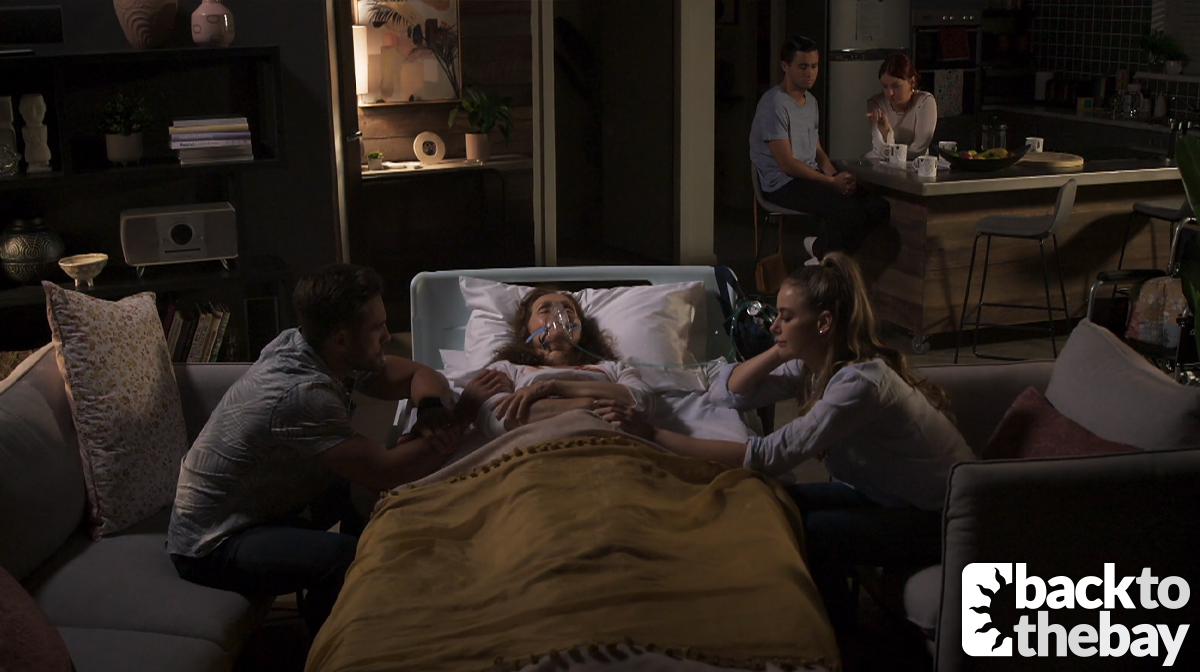 After sorting himself out, Aaron heads back to No. 24, where he and Chloe maintain a bedside vigil.

Holding hands with their beloved mother. Waiting for the moment to come.

However, Fay makes it through the night and Chloe and Aaron are grateful they have some more time with her. 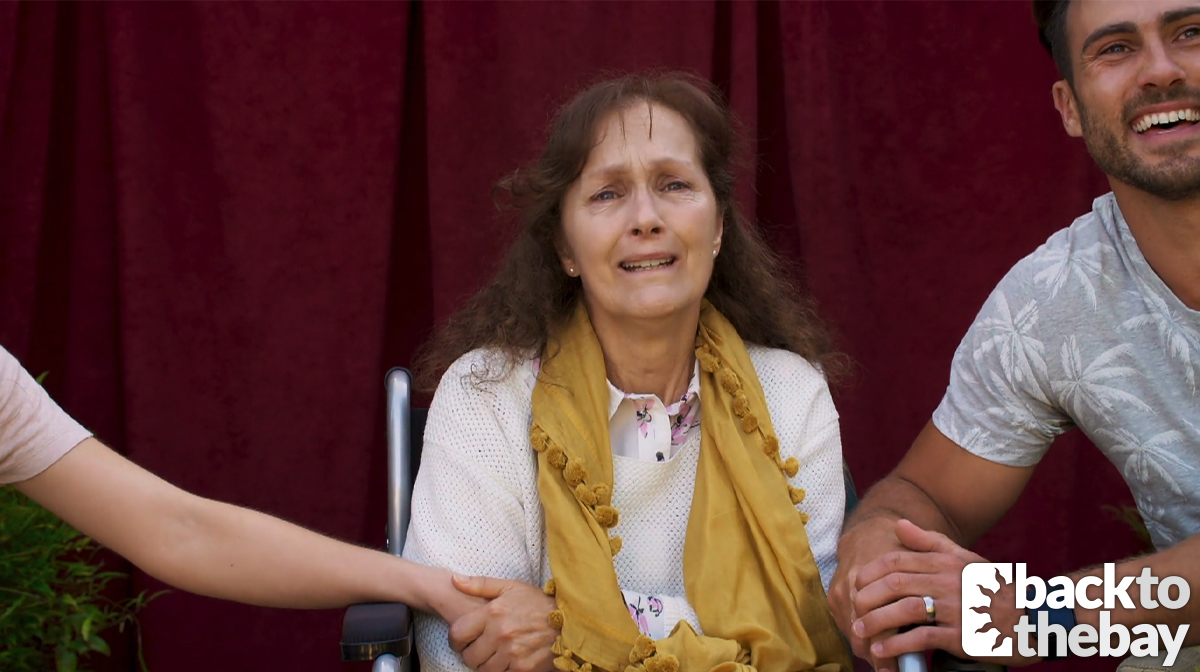 To tick another item off the bucket list, Roxy has organised an outdoor cinema in the backyard of No. 32. Nic’s sorted the popcorn, the video is ready to go. All Fay has to do is watch with her children by her side.

When the play button is pressed, the Brennans are surprised to find that it’s a home video from their first trip to Melbourne. In fact, it’s from when the kids all watched ET for the first time and then acted it out.

Fay’s eyes brim with tears as she watches the video. She may not have been able to complete her bucket list, but this truly makes up for it. Aaron, however, can’t stand to wait a second longer. He has to call Mark and Tyler. They should be in Erinsborough with them. 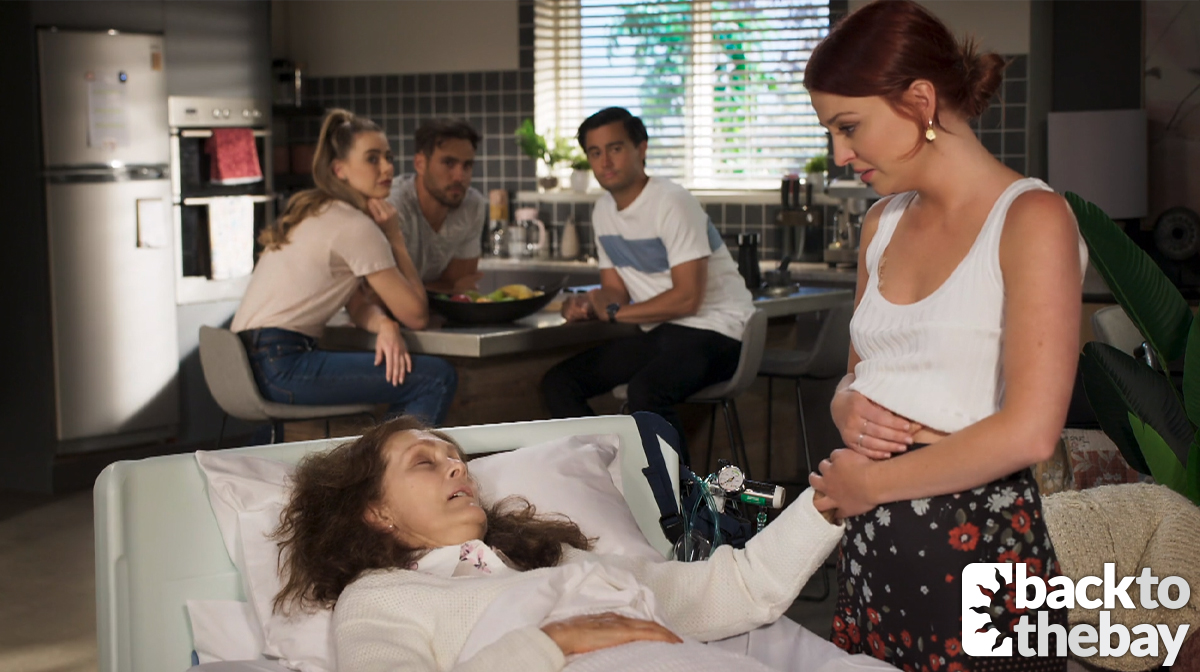 Comfortable and back in her bed, Fay’s condition deteriorates further. She does not have long left and knowing this, Nic seizes an opportunity to talk to Fay on her own. She tells Fay that she’s happy to have the Brennans as friends, but Fay assures the bond is stronger than that – she is family!

Struggling to hold it together, Nic takes Fay’s hand and places it on her stomach. Holding it there, Nic tells Fay to say hello to her grandchild. As if it was meant to be, the baby kicks for the first time. It’s a bittersweet moment for the entire family, knowing Fay will not be around to watch her grandchild grow up. 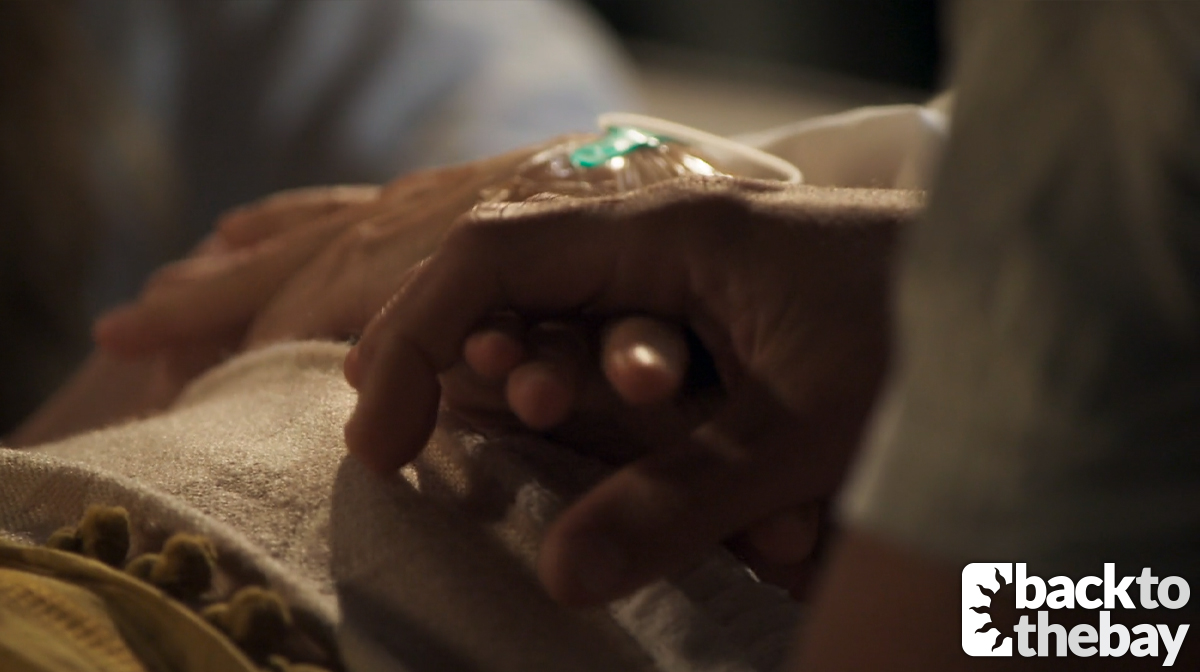 That night, Chloe and Aaron recite a poem to their mother that she used to tell them to help them sleep as children. As they finish the poem, Fay takes her final breath.

It takes a moment before realisation sets in. 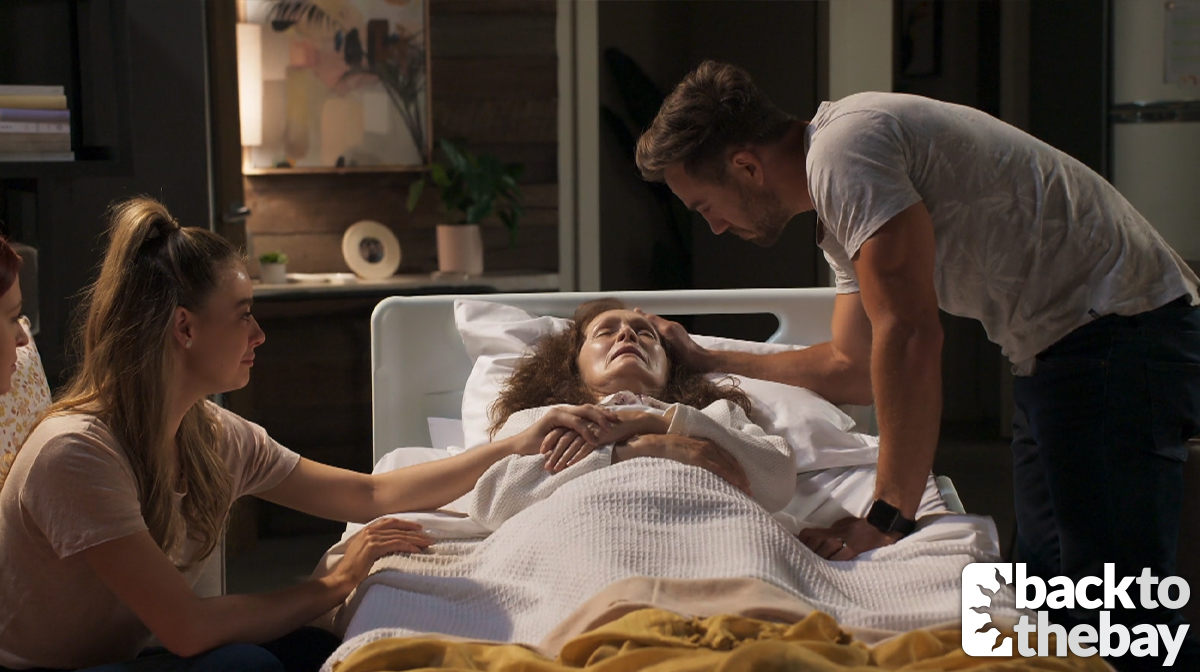 As they mourn, Aaron, Mark, Tyler and Chloe all have very different reactions. 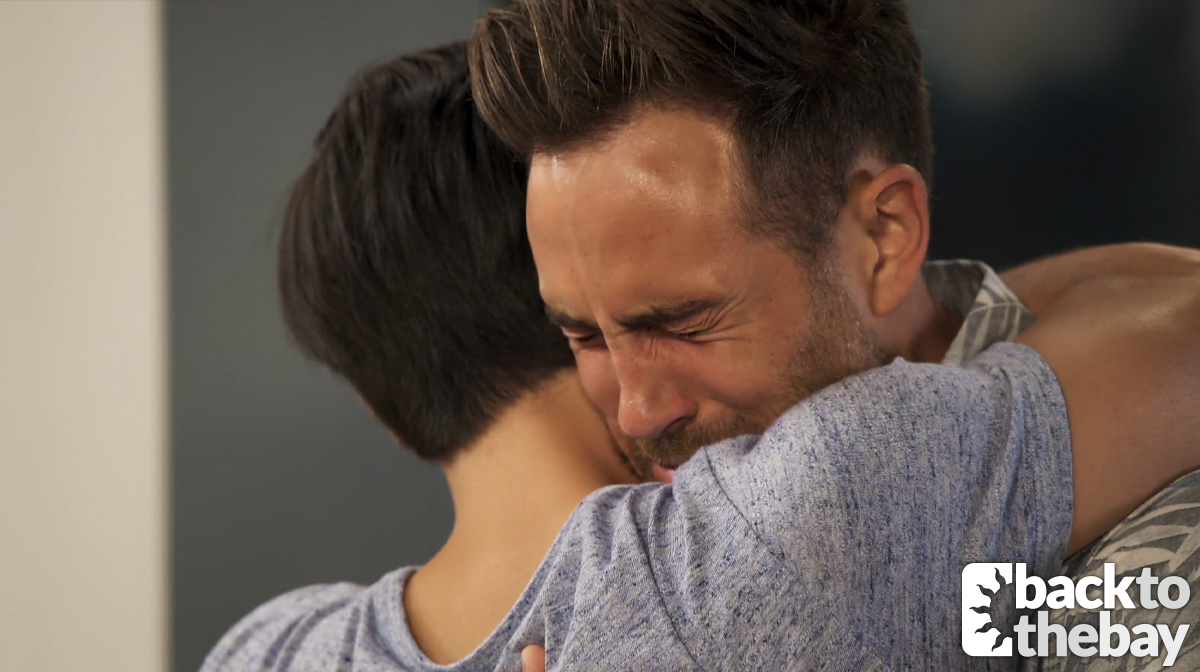 Aaron loses it at David, blaming him for his mother’s death. David knew that Clive was hiding something – being bound by doctor-patient confidentiality – but took Fay at her word when she said she hadn’t inhaled any of the chocolate. Aaron thinks that if David had told them his suspicions earlier, his mother could have been saved.

Mark and Tyler are furious with Aaron and Chloe for not telling them about their mother’s deteriorating condition earlier, having missed the chance to say goodbye. 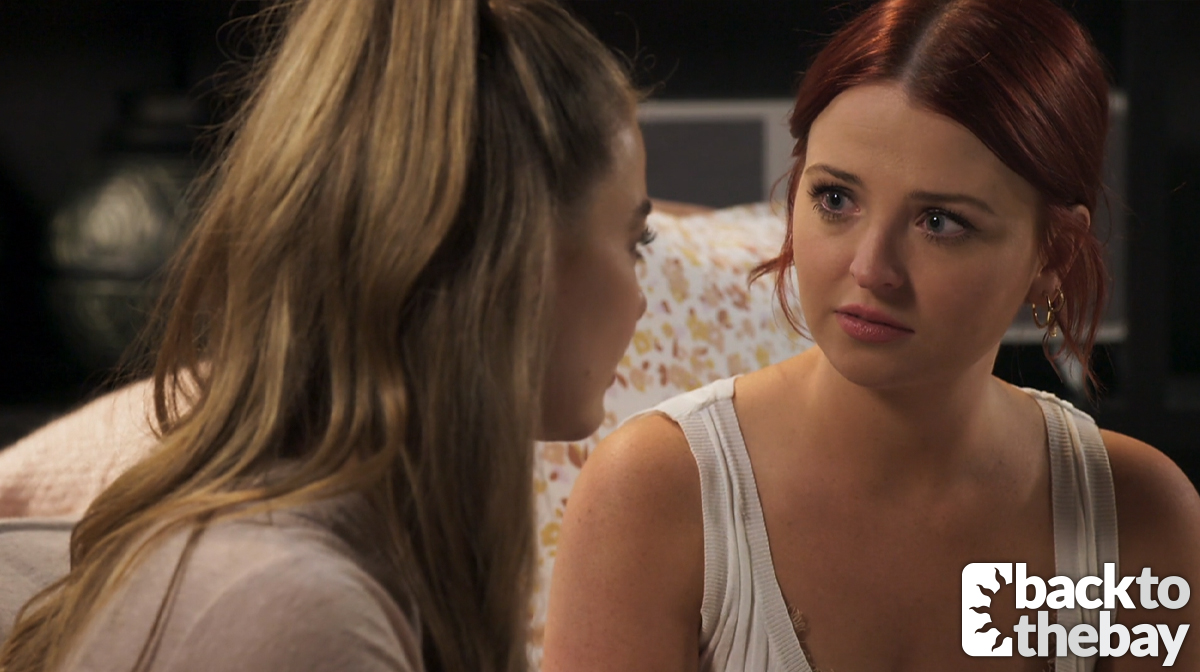 Meanwhile, Chloe struggles with her loneliness. With Nic next to her, she asks her to spend the night with her… in her bed. She doesn’t want to be alone!

How will Nicolette react to being propositioned by the woman she’s in love with? 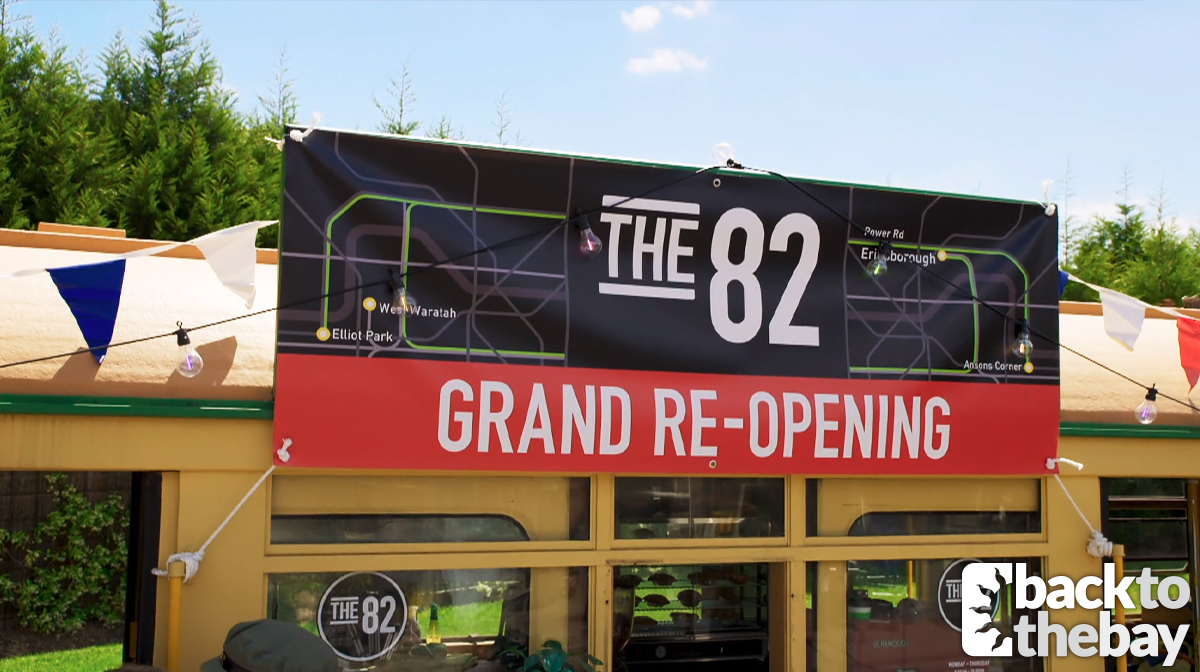 Elsewhere in Erinsborough, the grand reopening of The 82 is overshadowed by Fay’s illness.

Her deterioration is the topic of conversation, as the small group that have formed for the reopening discuss the fragility of life. There’s no knowing what’s around the corner, and they express how some things are worth fighting for.

For Kyle, it’s The 82 and Roxy, and he’s delighted to still have them both in his life. 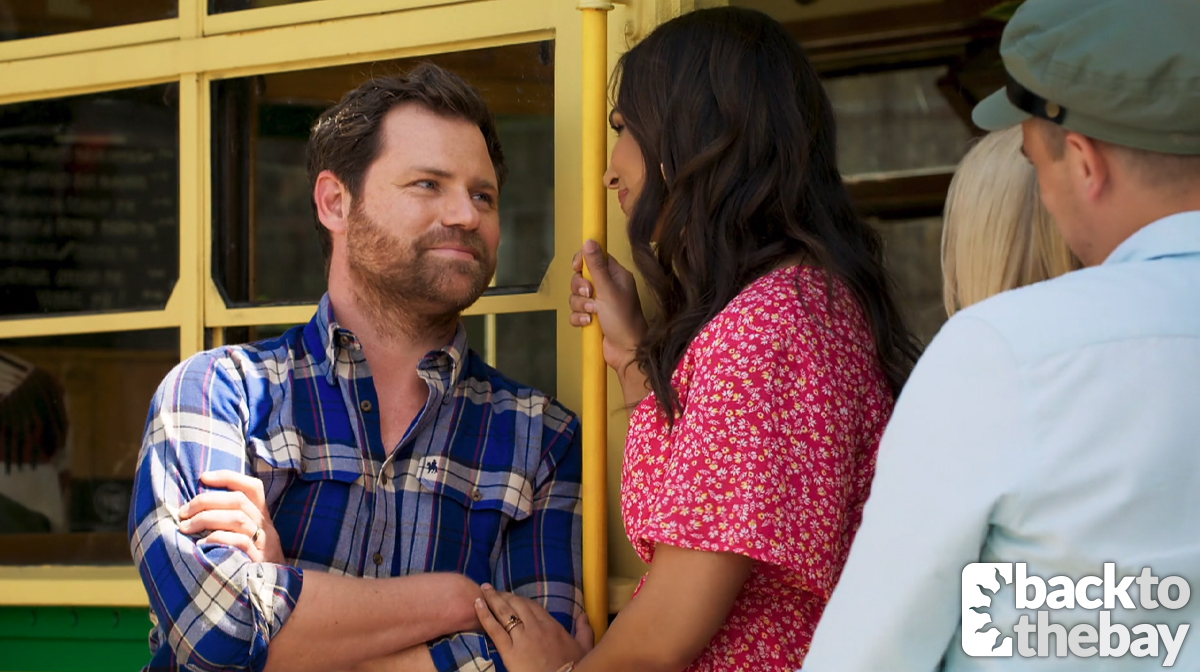 Listening and realising how stupid they’ve been, Shane and Dipi both know it is time for them to move back in together.

In fact, they’ve both been meaning to ask the other, but the time hasn’t felt right.

Now with their thoughts out in the open, how long will it take for the pair to call No. 30 home again?

Checking in on Fay, David immediately realises how sick she is.

With the reminder of how short life can be, Shane asks Dipi to move back in.

Paul is unimpressed by Brent’s lack of sensitivity when he’s unaware that Harlow is hit with grief over the loss of her own mother.

The morning after, Chloe is embarrassed to face Nicolette and must sort through her feelings.

David worries about how Aaron is acting towards his friends, concerned his grief is causing him to alienate those he loves.

Roxy posts flyers of the mysterious ring in a determined effort to find her attacker.

The recent intruder is a major cause of concern for Brent.

Olivia’s unrelenting pressure on Susan to reconsider pushes Karl to boiling point, leading to a confrontation with disastrous consequences.

Roxy thinks she’s received a lead from a man about the ring, but he’s only interested in dating her.

Yashvi is relieved to find Dipi and Shane acting love loved-up teenagers when she returns from a little holiday with Ned.

Dipi asks Shane to move to Sydney to be closer to Kirsha and Jay, unbeknownst to Yashvi.