The 1997 season picks up from the 1996 finale with Chloe’s psychiatrist Brad Cooper caught in one of his own traps. Having learned that he was in fact her attacker, Chloe leaves him all night to die. However, Brad is found by the police and taken to hospital where he has to have his leg amputated and Chloe feels sorry for him. Brad is arrested from the hospital. Months later, Chloe comes home to find animal traps laid out on the floor of the Beach House. She then receives a video of herself asleep in bed. 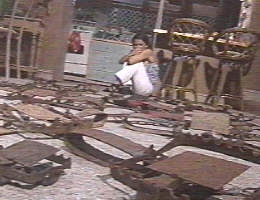 Ailsa’s brother Tony O’Rourke arrives in the Bay, wanting revenge on Ailsa for killing their father. Tony manages to find his way into Alf and Ailsa’s roof. Ailsa finds Tony playing with Duncan and they talk through their differences. Tony backs down on his plan of revenge for Duncan’s sake.

Pippa takes on a new foster kid, Tiegan Brooks, who has a very short temper. Joey discovers Tiegan cannot read and she throws a huge tantrum. She is later arrested for trashing the Surf Club. Pippa manages to have a breakthrough with Tiegan just before she leaves for a new foster placement. She returns to live with Pippa later in the year, after the death of her other foster mother.

Donald goes to Canberra and Marilyn suspects him of having an affair when she finds a picture from Katherine Walker (Shannon’s mother) sent to Donald “with love”. Donald returns and tells Marilyn that he went to Canberra to let Katherine down because he is happily married. Shannon gets some false accusations about her mother and Donald printed in the newspaper but Katherine calls Shannon to thank her for the publicity!

Sam loses Rachel at the caravan park and Lance Smart’s mother Colleen Smart finds her, making her first appearance in the show since 1988. She later becomes a main character.

Kelly is annoyed with Travis for asking her father’s permission to marry her, but she gives in and agrees to Travis’ proposal. Travis reluctantly agrees to move to the city but Kelly knows he belongs in Summer Bay and leaves alone, leaving just a note for Travis.

Finlay returns as Irene gives birth to baby Paul. Irene realises it is harder than she thought to hand the baby over to Fin. The baby goes missing from the hospital. Irene goes on TV to appeal for Paul’s return but is made to look like she is hiding him so she does not have to hand him over to her daughter. Saul returns to Summer Bay and tells Irene that he knows where her baby is, but he wants Joey back. Saul sets fire to the commune and apparently dies in the inferno. Fin gives birth to her baby and it looks just like Paul. Irene forms a close friendship with Father DeAngelo and is attracted to him. A young woman from the commune, Annie, confesses to him that she has baby Paul. Irene is finally reunited with Paul and hands him over to Fin.

Chloe moves in on Jesse behind Selina’s back, causing Selina to break up with Jesse and a rift between Selina and Chloe. Selina and Jesse get back together but it only lasts until Steven returns to town, declaring his love for Selina. Selina agrees to marry him. Irene is bewildered on the wedding day when the limo disappears with Selina inside. Steven thinks he has been stood up but Irene is not convinced. Selina wakes up in a shelter in the bush to find she has been abducted by Saul! The body found in the commune fire was not Saul. Selina cannot escape and begins to open up to Saul. She is devastated when Terri Garner finds them and shoots Saul dead. Selina gives Steven back the ring and leaves to travel the world. 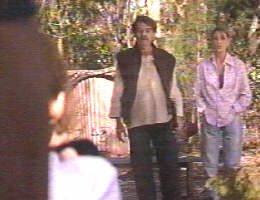 Shannon dates a guy called Kye and discovers he has a violent streak. After she dumps him, Kye arrives at the Caravan Park in a rage and knocks Pippa to the ground for standing in his way. Pippa is left in a coma. Her father Bert King comes to take care of the kids and caravan park even though he has Alzheimer’s. He has to deal with the tragedy when Stephanie falls down a cliff and dies, leaving boyfriend Liam devastated and questioning the point of Stephanie’s suffering in Somalia. Liam later leaves to live with his mother. Pippa wakes up and is very confused and has to deal with Michael’s death all over again. 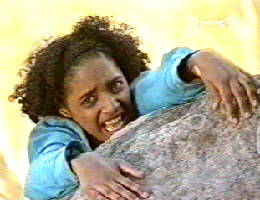 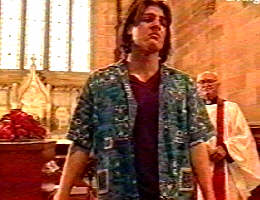 Donald’s actress mother Isobel DuPre arrives in Summer Bay. Donald claims she let his father die, but they eventually settle their differences. Isobel reveals she has cancer and leaves to die after a short relationship with Bert. Isobel’s last request is for Donald to do a parachute jump! Donald refuses and Rebecca and Marilyn do the jump instead. Marilyn wants a baby and tries to convince Donald. She becomes pregnant but miscarries. She and Donald plant a memorial rose bush for “Oscar”. 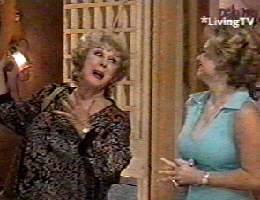 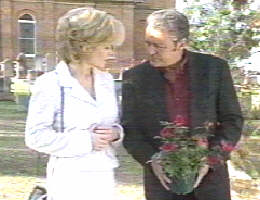 Shannon begins a relationship with the new doctor in town, Lachlan Fraser and gets to meet his dysfunctional family of doctors, including the highly-strung Diana. Mandy Thomas returns to the bay with an offer for Shannon. Shannon chooses Mandy over Lachlan and leaves for Paris with her. Lachlan turns to Chloe on the rebound. Lachlan dates Terri Garner but Chloe is pregnant with his baby.

A new girl, Jenna, brings back memories for Curtis as she is the spitting image of his deceased girlfriend Laura (she is played by the same actress). It turns out that Jenna is using a false name and running from her abusive husband, Shaun. Curtis leaves the Bay to follow surfing professionally. 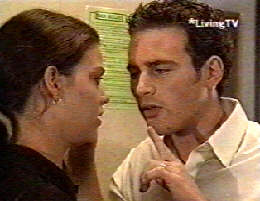 “Jenna” and her abusive husband

Jesse and Alf go into partnership to open a bait shop. Aaron Wells arrives and hangs around the shop. Alf and Ailsa decide to take him in. Aaron’s drug-addict sister Justine then turns up and Alf throws her out after discovering syringes. Pippa takes in Justine. Rich kid Vinnie Patterson returns, only his Dad has gone bankrupt and he needs places to hide his things. He and Justine start dating.

Casey tries to make Donald think he is losing his mind by playing tricks around the house, including loosening a light bulb in the kitchen. However, Rebecca falls when changing the bulb and is left temporarily deaf. Casey leads the tricks played on Brett Egan, a student teacher at Summer Bay High. They go as far as super gluing him to his seat. Casey doesn’t care about her actions as she is leaving, but Donald makes her realise just how nasty she has been on her last day of school. She leaves to live with her father in New York. 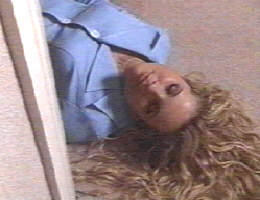 Pippa has a new love interest in Ian. Ian saves Justine when she goes out in a boat during Cyclone Raymond. Most of the residents stay at the school during the cyclone, while Donald reflects on the people around him by writing in his journal. Irene stays at home to protect her beloved Beach House from the storm.

Travis and Rebecca start dating. They move into a new apartment together and plan a surprise wedding. In the season finale, Travis and Rebecca get married on the beach. In the final scene, Ian returns to Summer Bay and Pippa looks delighted. They hug without saying anything. 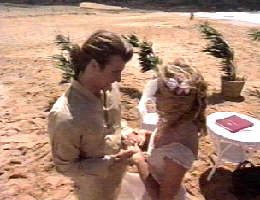 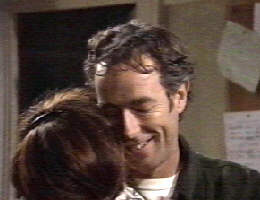