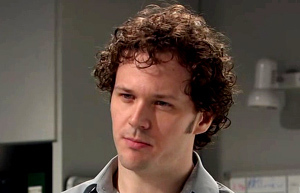 Dr Thompson was assigned to do Aden’s psychiatric assessment after his imprisonment of Belle, Rachel and Larry. He insisted to Rachel that she would be the best person to help Aden through his breakdown but an angry Rachel insisted that it wasn’t a breakdown and that Aden knew what he was doing. Later she changed her mind and told Doctor Tompson that she wasn’t being objective before and that Aden did need treatment for a breakdown.

The following year, Doctor Thompson met with Roman, who was suffering from psychological blindness following an accident when a rock was thrown through a car windscreen, hitting him. Dr Thompson tried to convince Roman that there was some deep-rooted reason for his blindness but Roman refused to consider the possibility that it was because of anything other than the accident. A few days later, Leah also took VJ to see Dr Thompson, after he had been scared of playing football on the beach, having found a severed hand the last time he had done so. However, VJ refused to discuss anything with Dr Thompson and insisted on going home.