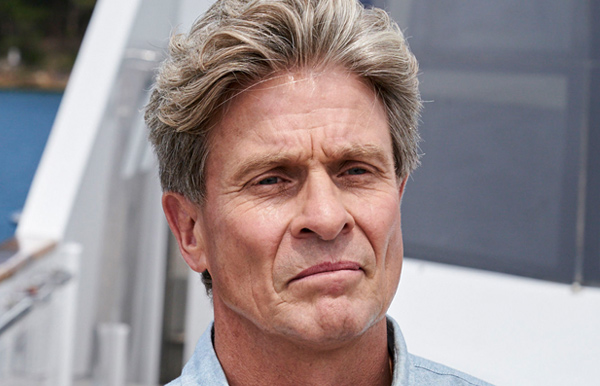 While cleaning out his mother’s house, Dean Thompson came across a letter from Rick to his mother, Karen. Dean found out that Rick, a married AFL star, was his father and that in exchange for Karen’s silence, Rick bought them the house. After tracking down Rick’s address and briefly meeting his half-sister Kayla, Dean divulged who he was to Rick. Dean showed Rick the letter and he revealed that by the time he found out Karen was pregnant, he had had another family. Dean realised Rick’s family didn’t know who he was and threatened to show the letter to Kayla. Rick called his bluff, and Dean left. When he returned to Summer Bay, Dean burnt the letter. The next night, Dean returned to give Rick another chance. However, having said everything he had to, Rick offered to pay Dean off, asking him to name his price. It was later revealed Rick gave Dean $50,000.

Months later, a mysterious newcomer named Mackenzie bought Salt. It wasn’t long before she revealed she was Rick’s daughter through his first marriage. When Mackenzie learnt Rick was running for parliament, she blackmailed him for $100,000 or she would reveal the truth about his affair and subsequent love child in Dean. Annoyed, Rick rocked up to Summer Bay and queried an oblivious Dean. They both confronted Mackenzie, and Dean stormed off after assuring his sister he didn’t want to be a pawn in her game. Rick urged Mackenzie that she had to stand on her own two feet.

Rick apologised to Dean for how he treated him and Karen, hoping that they could stay in touch. He asked after Karen, knowing that she had been ill. He gave Dean a business card and urged him to call should he need anything. Rick went to see Mackenzie again, admitting he has flaws. He called her bluff now that he and Dean were building a relationship. Before he went back to the city, he told Mackenzie that it was hard to love her, leaving her distraught.

After a week, Rick invited Dean to come out on his yacht with him for a few drinks. The next day, Ziggy and Dean went out to meet Rick. He and Dean bonded over their mutual love for AFL and Rick learnt that Dean gave up a scholarship to play AFL in the state reserves. Rick informed Ziggy that they both had to keep Dean close and on side, which rang alarm bells for her. After getting Ben to make an SOS call, Ziggy and Dean left the yacht and Ziggy told Dean that Rick was using him. Dean retaliated by teaming up with Mackenzie, who made a call to a political reporter about Rick.

When the Coastal News came out with an article revealing Dean as Rick’s son and that Rick paid him off, Rick twisted the story to make it seem like Dean blackmailed money out of him. After organising a photographer to hang around, Rick baited Dean into punching him. With the photos, Rick attempted to blackmail his son, but Dean called his bluff. A few days later, Dean contacted Rick and realised he set the whole thing up when Rick threatened him with prison if he didn’t give up his vendetta against him. Unimpressed, Dean refused. Later in the day, thanks to Ziggy, Dean agreed to cooperate with Rick’s request to stay out of his life for good in exchange for the photos being destroyed.

In a bid to end Mackenzie’s vendetta, Rick went to the police, and made a statement claiming she stole $80,000 from him. She was arrested for embezzlement soon after. However, Colby appealed to his better nature, and Rick apologised to Mackenzie for going too far by getting the police involved. The pair came to an understanding: Rick would drop the charges if Mackenzie paid back the money. She agreed and he left town.