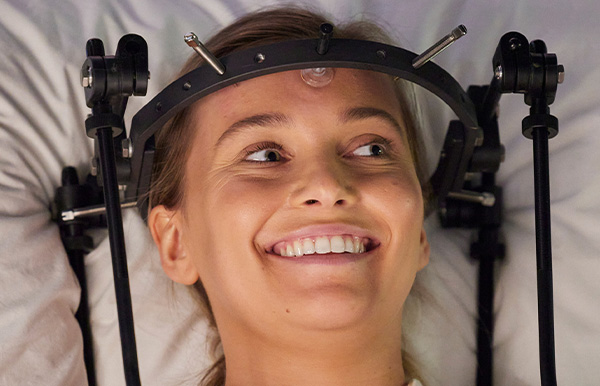 Rachel was first seen when she ran into Christian at a skydiving range. Having come to do a dive as a post-divorce present from her friends, she calmed Christian’s nerves as he prepared for his first dive. Tragedy soon struck when Rachel was involved in a skydiving accident. After being rushed to hospital and having scans, Christian informed Rachel that she was suffering from an atlanto-occipital dislocation – her skull had separated from the spine and the ligaments were the only thing holding everything in place. She was fitted out with a halo brace, which would solve the issue over time.

Despite her situation, Rachel was grateful for Christian being around after her fall and thanked him. The pair slowly grew closer as Christian spent time with her in hospital. However, when Rachel learnt that he had called off his wedding to look after her, she was perplexed. He opened up about the ordeal with Lewis and explained he believed saving her was his purpose.

After Justin escaped from hospital post overdose, Tori arrived to find Christian asleep next to Rachel’s hospital bed. Furious, she woke him and explained what had happened. After he rushed out, Rachel took responsibility, stating she couldn’t sleep and kept him up talking all night. Later, when Rachel asked after Justin, Tori bit her head off, annoyed by her bond with her fiancé.

Following thing, Rachel spent the next few days getting to know Christian. She taught him where all the best vending machines in the hospital were, but not long after she suffered a panic attack due to the brace. To help her mental health, Christian organised for her to be granted a day release so the pair could enjoy the fresh air. On the beach, Rachel took Christian’s hand and assured him that he was incredible. When Tori called off her engagement to Christian, Rachel was the person he went to confide in.

The pair found a confidence in one another, with Rachel being the biggest advocate for Christian trying to mend things with Tori. As a result of her friendship with Christian, she received animosity from Jasmine. Later, Christian asked Rachel about how she’d feel about getting back out in the real world. She couldn’t believe how quick her recovery was going, but was excited by the prospect of the journey being over.

When Christian delivered the news that her halo brace was going to be removed, she touched his hand. He pulled away and admitted that while they had a connection, to him, it was completely platonic.

A week later, Christian removed Rachel’s brace. Afterwards, an emotional Rachel confirmed she’ll be going to the beach when she first gets out before saying goodbye. Although Christian suggested it could be temporary, she admitted she thought it best if it was permanent. While on her walk, she sent Christian a text.

However, tragedy was just around the corner. On her way back to the hospital, Rachel was hit by a car. Despite Christian’s best efforts, Rachel was unable to be resuscitated. Distraught, he learnt that she had texted him just before she died and broke down when he read the message: “Maybe in another life things could have been different…“.