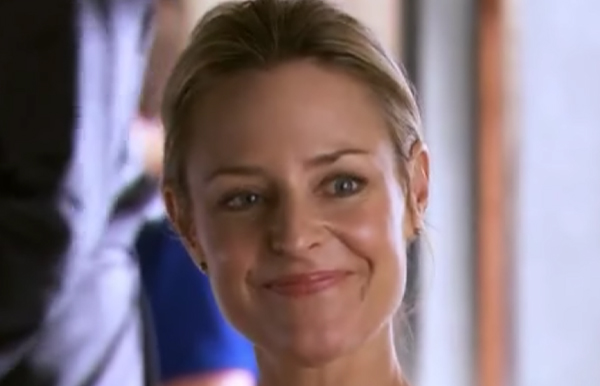 Lisa was Dex’s physiotherapist when he was recovering from his car accident. She ran into Sid on the pier and told him the team were meeting to discuss his progress, offering to meet him for lunch to update him. They met at Angelo’s, where Lisa arranged to move Dex’s sessions to the morning when he was less tired and also noted Sid was less interfering than other doctors related to patients, but also warned that Dex might not fully recover. She agreed to stay for a drink after confirming no-one was waiting for her at home except her cat and they had a liaison in the back of a car afterwards.

Lisa encountered Sid again a few days later when she took Dex for a water therapy session. He initially told her the liaison was a mistake but then changed his mind and asked to see her again. However, Dex picked up on the vibe between them when she paid a visit to the farm and told Sid she was married. Sid confronted Lisa who told him that while they officially still lived together, she and her husband Neil lived separate lives and slept in separate beds. Sid was reluctant to continue seeing her, although he was happy for her to continue as Dex’s physio, but Lisa told him she had asked Neil to move out and they kissed.

Romeo asked her for advice on competing in the surf carnival with his knee injury. Lisa advised him to use his own judgement and he decided not to. Indi also picked up on the chemistry between Sid and Lisa but Sid decided to end it. However, Dex invited her along to Romeo and Indi’s vow renewal. Afterwards though, she told Sid that Neil would never let her leave him.

While doing a physio session on the beach, Lisa was distracted by a phone call from Neil and let Dex run into a flag. Neil had returned to the house unexpectedly and, when Sid turned up looking for her, lied that she wasn’t there. Lisa then turned up at the Walker house with a bruised face, explaining Neil had hit her. Sid let her stay the night, with him sleeping on the couch so she could have his bed. They learned Neil had changed the locks and frozen her accounts so Sid let her stay longer.

Lisa met Neil at Angelo’s but he refused to discuss splitting up, insisting that she had no future without him. Lisa took out an AVO against Neil but Sid was attacked outside the farm. As a result, Lisa moved out to a motel. When Neil intimidated Indi in an attempt to get her to tell him where Lisa was, Lisa moved back in with him. Sid found her clearing out her things at the hospital and she explained she and Neil were moving away: Once there was enough distance that he couldn’t blame the Walkers, she intended to leave him for good.