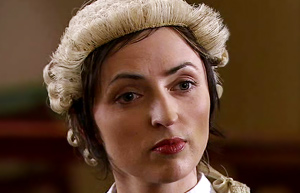 Miss Holly was the prosecutor when Ric Dalby was on trial for killing Rocco Cooper. She called Lara Fitzgerald as a witness, where Lara testified to the forensics evidence linking Ric to the murder, but Morag pointed out an alternative explanation for the evidence. Holly then called Johnny Cooper, who testified about Ric going to see him to find Rocco’s whereabouts and claimed Ric had threatened him and said he was going to kill Rocco.

Holly then called Matilda, despite her not being subpoenaed and having been in the court all along, and forced her to admit Ric had told Rocco he’d kill him during an early confrontation. When Holly’s time to cross examine Ric came, she broke court rules by bringing up the fact his father had suffered a fatal heart attack during a fight between them, which the judge told the jury to ignore. During her summing up, she pointed to the physical evidence and testimonies which resulted in Ric being found guilty.

She bears a strong resemblance to defence solicitor Kay Bowman but it’s not clear if there’s any connection.