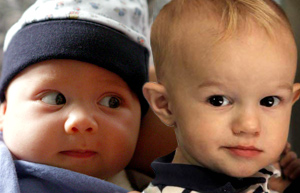 Harry’s arrival into the world was quite an eventful one as he decided Belle’s hen night was the perfect time to make an appearance. Complications with his birth and breathing difficulties gave his parents some anxious moments but a healthy baby boy was returned to them after a spell in the neo-natal special care unit.

Tony and Rachel were both smitten with their newborn, and couldn’t wait to take home, but it was soon clear that all was not well with Rachel. She was very anxious and was obviously not adapting to parenthood as well as Tony. Harry couldn’t seem to settle into a routine and the situation was not helped after he was kidnapped by Jane, a woman who had lost her own baby and blamed Rachel for it. After a night away from his frantic parents, Harry was soon reunited with them and they began to try and move on as a family unit.

However, it soon emerged that Rachel’s anxiousness has not gone away and she became more and more erratic. One night when Harry wouldn’t settle, Rachel put him into the bed with her and managed to roll onto him in her sleep. A horrified Tony found them and called an ambulance, while Rachel revived Harry. Harry was then rushed to hospital and after a worrying few hours, he managed to pull through without any lasting damage. It was this that made Rachel accept she had a problem and she was diagnosed with post natal depression.

Rachel and Harry then went to Karitane to try and get some support for her post natal depression and help Harry to get into a routine. This seemed to help a lot as family life for the Holdens began to settle down and Rachel going back to work seemed to ease a lot of the problems. Towards the end of the year, Harry seemed like a much happier baby and the Holdens looked to move forward after a difficult year.

After his eventual start to life, Harry had a quieter 2010, mostly serving as a mute observer to Tony and Rachel’s disagreements before leaving with them for Boston.