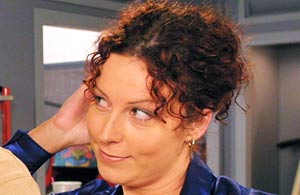 When Brodie and Dani were looking at photographs of Dani as a baby, Dani joked to Brodie that she couldn?t make fun of her as Brodie had no baby photos to laugh at. Brodie insisted that she did, it was just that her mum had them all. Later that evening, Brodie phoned her mum, wondering if it would be possible for her to go around and pick up some stuff. Jan insisted that she would bring the photos up to Brodie.

The next day Jan came up to the Sutherlands and went for a walk with Brodie. She said that she had left Gary and was hoping that Brodie would give her another go. Brodie agreed to meet her mum again in a couple of day?s time.

When she came to see Brodie, she booked herself into a caravan. Later that night, when Rhys, Alex and Noah were fixing Leah and Vinnie?s car, Jan came out to tea and started flirting with Rhys, which didn?t escape Rhys? notice.

Brodie then invited Jan over for dinner a couple of days later and with Shelley held up at work Jan again flirted with Rhys, and this time it didn?t escape the attentions of Brodie or Jade. (How Kirsty didn?t notice it is a mystery.)

When Brodie confronted Jan over the flirting with Rhys, Jan at first got angry at Brodie, but Brodie?s new levels of confidence, she stood her ground and it was Jan who broke down. This made Brodie think that her mum needed and she began making plans to move back in with her mum.

The next day whilst they were in the diner, Gary, Jan?s ex walked in and despite Jan saying that she no longer needed him in her life, Brodie saw them kissing later. When Brodie asked Jan about this, Jan again had a violent outburst, Brodie decided to stay with the Sutherlands and Jan left with Gary again.