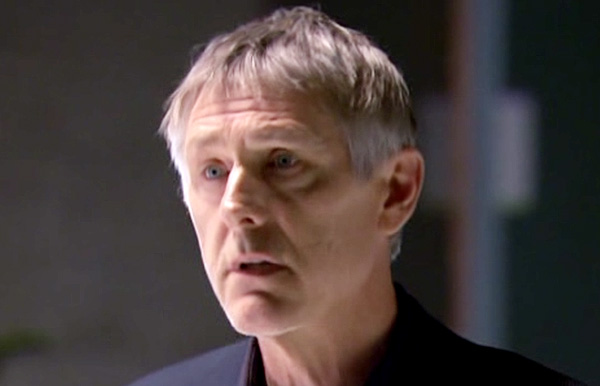 When Brax was planning to sell Angelo’s and move to the city, Heath said an old cellmate knew someone who might be interested in buying. Brax was shocked when the person in question turned out to be gangster Geoffrey King, who arrived to view the business with his wife Michelle, daughter Courtney and nephew David. Brax tried to put him off, saying the business wasn’t doing well, but Geoffrey (who warned Brax not to call him Geoff) indicated he had less honest ways of turning a profit and also that he intended to make use of Heath’s local knowledge. Brax told him the restaurant was no longer for sale, so Geoffrey replied that he’d give him time to think about it.

Geoffrey continued to put pressure on Brax to sell, making implied threats against Charlie and the restaurant. After Charlie was killed and Heath was left running Angelo’s, Geoffrey offered him cheap booze, giving him $10,000 worth for half the price and also giving him an expensive watch, apparently as a gift. Brax was furious, so Heath went to Geoffrey and tried to cancel the deal, but Geoffrey told him that not only did he still want paying but he wanted $25,000 for the watch. When Heath tried to return it to him, Geoffrey threw it into the sea. Brax returned the booze but Geoffrey replied that he still wanted paying for the watch and continued to insist Brax sell Angelo’s to him. Brax took Georgina Watson to Geoffrey’s lock-up when she asked him about stolen booze but they found it empty.

Brax’s next tactic was to invite Geoffrey round to Angelo’s, put a gun on the table between them and invite him to shoot him, saying it was the only way he’d get the restaurant. Geoffrey picked up the gun but before anything else could happen Leah interrupted them and Geoffrey left. Leah later met Geoffrey on the wharf and offered him the $25,000 if he left Brax alone. Geoffrey agreed and later visited Brax to say he wasn’t interested in Angelo’s anymore, mocking him for needing to be bailed out by a woman.