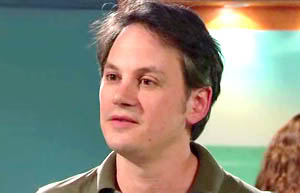 When Jazz was feeling lonely she called her ex, Kevin, in an attempt to reconcile. The next day, Kevin arrived in the Bay with his two daughters, Essie and Bree, and bumped into Drew in the surf club. Kevin told Drew that Jazz had called him and he came because he thought their marriage was worth saving. Drew told him that Jazz was putting on an act but Kevin told him to stay out of it.

Later, when Drew saw Kevin and the girls in the surf club he again challenged him, this time about Jazz sending Bree to boarding school. When Kevin wouldn’t listen, Drew told him about what Jazz had been up to since she’d been in the Bay, particularly the men she’d been with. Kevin didn’t want to listen and got aggressive with Drew telling him to keep his lies to himself and that he believed Jazz when she said there had been only one man.

After arranging a meal at the diner for himself and Jazz, complete with roses, Kevin again bumped into Drew. Drew showed him a picture of Jazz and Tony together to try and prove Jazz was lying. Later, at dinner, Jazz and Kevin seemed to be getting on OK and were trying to resolve their problems until Kevin asked Jazz if she had slept with anyone else, other than the one he knew about. She said she hadn’t but Kevin showed her the picture that Drew had given him. Jazz tried to explain that Tony was just a friend but Kevin didn’t believe her and demanded to know the truth. Just as they were arguing, Tony came into the Diner and attempted to come to Jazz’s rescue. When he found out Kevin was her husband he backed off but it was clear to Kevin what had been going on. Kevin suddenly realised that Jazz only called him because she was desperate and he stormed out of the Diner and out of her life for good.