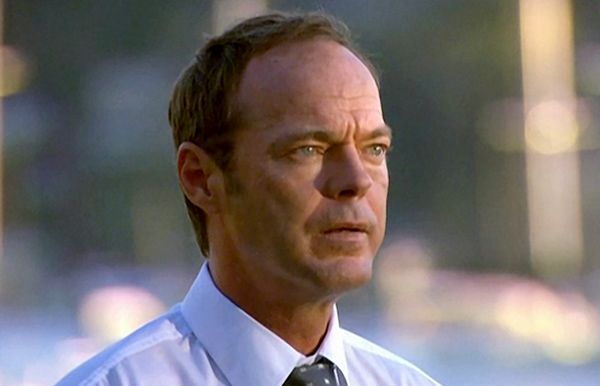 Dennis was the head of a development consortium looking to develop an area of wetlands as a resort. He hired Roo to assist him and she in turn asked Romeo to take Dennis out in the Blaxland to look over the area. Alf refused to let him go since there had been a storm warning so Harvey took them out instead. Alf’s fears were proved right when the boat capsized. Fortunately, the group made it to shore at the wetlands and were rescued by Alf and Romeo. Grateful, Dennis told Romeo that when the resort when ahead he would have the charter contract.

Dennis successfully bought the land but told Romeo he couldn’t give him anything in writing about the contract until they’d gone through all the processes. He agreed to give Indigo an internship with the development and used her as a model in some beach shots for the brochure when the model he’d hired didn’t turn up, giving her a spa day as a thank you.

Harvey applied for the contract with the development but Dennis turned him down, saying they couldn’t be associated with someone with Harvey’s reputation. Harvey hit back by accusing Dennis of giving John presents as a bribe. John asked Dennis to speak up for him but Dennis replied that he had intended for the gifts to influence John. John was forced to resign from the council and instead invested in the development, only for Harvey to decide to stand for his seat and oppose the development.

Dennis hired Romeo as a sales rep but was annoyed when he took his client surfing. Romeo didn’t mind since he didn’t want the job but found himself being praised by Dennis when the client, Adrian, bought three apartments. Alf and John organised a meeting to discuss the development but Harvey shouted Dennis down with claims of ecological and economic disaster and Dennis committed a public relations blunder by dismissing his opponent as a small-minded, backward-thinking hick.

When Harvey won the election, Dennis and John were overheard by Romeo discussing taking care of the situation. Romeo saw Dennis loading a body into the boot of his car at the development site and, when the body reappeared at the caravan park, informed Georgie. The body turned out to be that of Stu Henderson, who Dennis had found dead at the site: He had moved him because he wanted the development to press ahead before Harvey could order a re-evaluation and didn’t want a murder investigation getting in the way. Dennis was questioned by Georgie and released but the development was closed down and Dennis was ordered to stay away from the site.

Dennis had to cancel Indigo’s internship and fought a losing battle to make more sales. He was furious when he found Roo working with Harvey on his alternative wetlands development. John told Dennis that he was tainted and the development stood no chance if he remained involved but Dennis refused to pull out. Soon after, the development was officially cancelled and Dennis told Gina that John’s $400,000 was lost, giving away the fact John had invested more than he’d told her.

When John learned the council had bought the land back from Dennis, he confronted him about returning his stake. Dennis protested that he had been left out of pocket and needed the money to cover creditors, adding that even his house and car were leased, but agreed to give John half of his money back. However, when John turned up the next morning, he found removal men moving Dennis’ belongings out of the house and Dennis skipping town in a taxi, which he failed to stop.