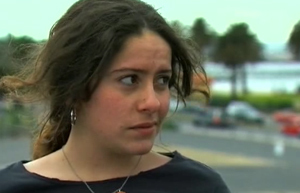 Kayla was first seen walking around the streets of Melbourne, approaching Melody whist sitting on a bench. She was staying at the refuge where Melody had her possessions stolen. She alluded to Melody that if she needed money she could sell herself, saying “We gotta do what we gotta do.” She then informed Melody of a food van nearby that was giving out breakfast. She begrudgingly lets Melody accompany her to the food.

When the two arrived at the van, they were dismayed to find that breakfast had already been served. Kayla managed to get some scraps, but there was not enough for Melody, so fellow street kid Archie offered Melody his, to which she refused.

Whilst Melody and Kayla are walking, Mel discusses her intentions of getting a job and finishing her education. Kayla laughs this off and when Mel asks if she has any plans she replies “Have some kids, ruin their lives. Live fast, die young you know whatever.” She then informed Melody that she has things to do and she walks away, leaving Melody to fend for herself.

Later that evening, Melody comes across Kayla again, wearing what Melody believes to be her jacket, which had been stolen from the refuge earlier that morning. She confronts her and accuses Kayla of stealing it. Kayla denies the claim, saying she got it from the op shop. She doesn’t falter at Melody’s threat to call the police and when she is pushed by Mel, she picks up a bottle, smashes it and is about to glass Melody but then Archie intervenes, rushing Melody away.