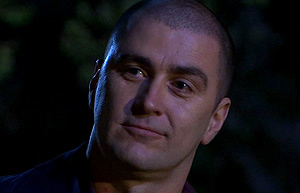 Clyde was a criminal working for Kelli Vale.He was first seen watching Amanda’s house with Kelli, after which he broke in, having deactivated the burglar alarm, and stole Amanda’s shares portfolio for Kelli.He hired a young man, Theo Barrett, to abduct Belle and bring her to him, then rang Amanda and told her he had her.Meanwhile, Kelli went to Amanda’s house and acted like a concerned relative.

Once the police had set up recording equipment at Amanda’s place, Kelli contacted Clyde and got him to make a brief untraceable phone call, which picked up the sound of a level crossing nearby.Clyde briefly entered the room where Belle was being kept when she started making a noise, before Kelli, having pointed out the noise of the level crossing on the recording, texted him and told him to leave.After Belle had been rescued from the now empty house, Kelli paid Clyde off.

A few weeks later, Clyde turned up at Amanda’s house to see Kelli, telling her he had got into trouble and needed $5000, otherwise he’d tell Amanda and the police what she was up to.Kelli gave him the money but as he was driving out of town, he was spotted by Belle, who recognised him and halted the car, seeing the bag of money and recognising it as one Amanda had given Kelli earlier.

Clyde drove off and met up with Kelli’s boyfriend Ethan Black, who encouraged him to leave the country. When Clyde refused, things got heated between them and, during a struggle, Clyde fell and fatally hit his head.Ethan got rid of the bag, put Clyde’s body back in his car and pushed it off a cliff, with a fake suicide note claiming he couldn’t live with what he’d done to Belle.The police initially believed the story but likely learned the truth once Kelli’s involvement was discovered.