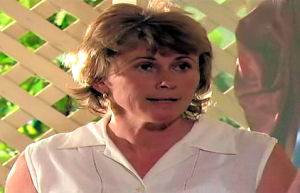 Mrs Cronin was an irate customer of the caravan park and wanted Alf to move his Ute as it had been blocking her van for two days. Since Alf wasn’t allowed to drive, he told her that he asked Ric to move it. Alf offered her to move it herself if he gave her the keys. Mrs Cronin couldn’t drive a manual and her husband had gone off on a fishing trip. Alf promised her that it would be moved by the afternoon.

Mrs Cronin came back that afternoon and complained to Alf that the Ute hadn’t been moved. He told her that Sally would be back soon but that wasn’t good enough. Mrs Cronin had visitors arriving in an hour, she was going to the shops and she demanded that the Ute be moved a few metres away from the caravan by the time that she came back.