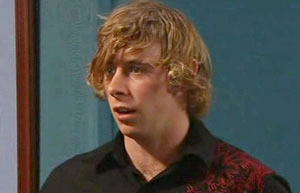 Tim was a colleague of Ric’s from the garage, who went to a party at Noah’s with Ric and Mattie. Tim was first seen talking to a very bored Mattie about cars. He then hassled Ric about not drinking and talked him into having a vodka and orange. Unbeknown to Ric, Tim was buying him doubles, so he ended up a little tipsy on a night when he was trying to impress Beth by being responsible and looking after Mattie. Thinking Ric would appreciate the joke, Tim confessed to buying him doubles, but they got into an argument about it. Tim then made a comment about Mattie and an annoyed Ric pushed him. Tim threw his drink over Ric and they got into a scuffle which led to Mattie getting hit in the face. Tim then immediately ran out of the surf club.