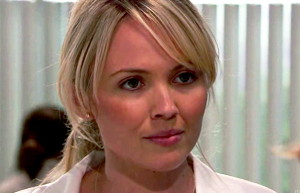 Marie first appeared as an intern at the hospital under Rachel’s supervision. It was clear she had a history with fellow intern, Lewis, and was only too eager to give a second opinion when Sam questioned his judgement regarding a patient. Marie went on to tell Sam she had a relationship with Lewis in med school and that Rachel was making a huge mistake getting involved with him.

The hostility between Marie and Rachel grew as Marie thought Rachel gave Lewis preferential treatment because of their relationship. Marie didn’t hold back and told Rachel she was unprofessional because she didn’t immediately resign as Lewis supervisor. The clashes continued when Rachel caught Marie sitting on the edge of a patient’s bed chatting. Rachel chastised her for what she saw as flirting but Marie insisted she was just being friendly.

The tension between Lewis and Marie increased when Marie told Rachel that Lewis changed a patients’ medication without consulting her. Lewis managed to turn the situation around to his advantage which only frustrated Marie further. When Lewis caught Marie swapping phone numbers with a patient they ended up in a fight which was interrupted by Sam.

The next time we saw Marie she was found unconscious and badly beaten in bushes near the surf club by Belle and Drew. They immediately called for assistance and Lewis, who was nearby, rushed to help. When they arrived at the hospital Marie told Lewis to get away from her which led people to believe he could have been involved the attack. Marie couldn’t remember anything about what happened or who attacked her so she did nothing to discourage people’s suspicions.

Lewis then tried to jog Marie’s memory by telling her what happened before the attack. It appeared they had an argument and Marie threatened to tell everyone about Lewis sleeping with a patient. Marie still insisted she couldn’t remember what happened. She then told Rachel that she was leaving and wasn’t sure if she wanted to continue in medicine. Rachel tried to persuade her to help clear Lewis’s name before she left. Marie then went to the police station with Lewis and told the police that her memory had returned and she could remember everything, Lewis was not her attacker. Marie was last seen giving an official statement to the police.