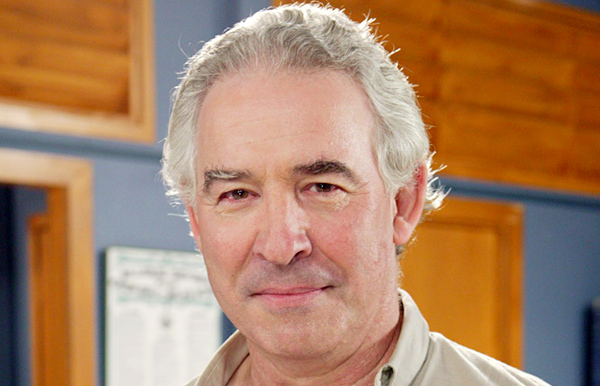 Ross, or Detective Buckton more formally, was first seen arriving in the police station to help solve Sam Holden’s murder. Morag’s face clearly indicated that they had met before, and she was quick to tell Roman that he was a fair and honest man. A former lover, perhaps???

Wanting to get the case underway, Detective Buckton’s first job was to interview Martha. Whilst in the interview room, he was quick to say that he thought the note found by police was a fake. He also said that he would get the truth.

When new evidence came to light, the interview with Martha was suspended and Jazz Curtis was brought in for questioning. According to Jazz, she had told them everything that they needed to know. However, Detective Buckton felt she was holding something back and asked her if there was anything else he should know, however trivial. Jazz then opened up and explained that Sam had made personal comments about her the evening before her body was found on the beach. Ross had heard enough and ended the interview.

Sensing a connection between her great aunt and Ross, Martha wanted to know more about their history. Morag told her that they were together for two years after her marriage ended but her and Ross’s relationship ended too because Ross was “married to his job” and Morag wasn’t prepared to play “second fiddle” in anyone’s life.

Next in for questioning was Tony Holden, who couldn’t believe that Detective Buckton thought Sam’s death was a result of the situation between Jack and Martha. Morag came to him with the suggestion that Sam had killed herself and Ross challenged her to prove it. When she found the proof to back up her claims Ross dropped the charges against Martha and Jack and asked Morag if she might like to go for a drink for old times sake.

They went on a date in The Diner but it was ruined by Colleen’s interference and Morag snapped at her. Ross seemed to back off from Morag as a result, telling her he had things to sort out in the city. He returned a few days later and asked Morag out again and their relationship strengthened with a day out fishing and some accidental double dates with Ric and Matilda. Ross though was receiving phone calls seemingly from another woman. Caught out by Martha, she challenged him to tell Morag the truth and Ross came clean, admitting that he had lied about his wife’s death and that it had been only recent rather than a few years ago, as he had told Morag. He told her that their marriage though had been over years ago and he had only stayed around because she was sick. Though initially horrified, Morag eventually relented and told him she still wanted him around.

Their romance hit another hurdle when Morag started receiving threatening texts warning her to back off from Ross and the culprit was revealed to be Ross’s grieving daughter Charlie who promptly arrived in the bay, determined to spilt her father and Morag up. Her plan was thwarted by Ross who announced he loved Morag and wasn’t going anywhere despite Charlie’s guilt trips and a delighted Morag told him she loved him too.

When Ross’s other daughter Ruby arrived in the bay she welcomed Morag with open arms and thanks to her blossoming relationship with Roman, Charlie too came to accept them. With Martha’s cancer diagnosis convincing them that life was too short Ross enlisted the help of Charlie and Ruby to propose to Morag and she was delighted to accept. They married in a simple ceremony with all their family and friends and the blessing of Ross’s daughters before heading off on their honeymoon round Europe.

When they returned though, it became clear that something wasn’t quite right as Morag seemed stressed and Ross forgetful. When he disappeared when he was due for dinner and was found wandering the roads, by Charlie, he told them he was suffering from jetlag and sleeping tablets but he and Morag continued to row with her bringing up a similar incident in Paris. When Ross showed up at the station with news on a cold case, Jack and the other officers helped him organise a search for the body but it soon became clear that the site was clean. Jack received the case notes detailing that the case had been solved years earlier just Charlie arrived at the station to report her father missing. Led home by Charlie and Morag, they both insisted he be checked out at the hospital.

At the hospital Rachel diagnosed Alzheimers and the news was broken to a devastated Charlie and Ruby. A series of accidents at home convinced Charlie that Morag was not up for the task of looking after Ross and Ross, not wanting to burden his new wife, agreed to move in with his daughters. After making a mess by trying to cook breakfast in the middle of the night only to be found by Leah, Ross snapped at Ruby and she fled from the house. Left to his own devices Ross turned on the cooker and left the house. Luckily Matthew Lyons arrived in time to stop the house burning down and Aden found Ross at Morag’s house.

The incident convinced Ross that he needed help and he enlisted Morag’s help before telling his daughters that he wanted to go into care. Though Charlie accepted his decision, Ruby took it badly but it was Morag who surprised Ross the most by offering to go with him. Ross then made the decision to get care in the city rather than have his daughters see him deteriorate and he made his peace with Ruby before leaving the bay with Morag for the care home in the city.