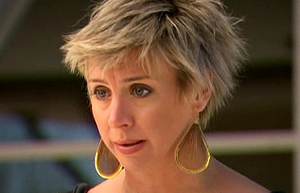 Simone was a Fashion Design lecturer at Northern Districts University. At an Open Day Nicole recognised her from the student website and hoped to talk to her about doing a second year elective, despite only just starting first year. Nicole wanted to do Evening Wear Design but Simone advised her against it, saying that Design is a tough course and she should stick to the first year modules. She even went as far as to say that Nicole should perhaps consider studying part-time considering her other commitments, hinting at her pregnancy.

Later that day Simone spotted Nicole holding a bottle of beer at the toga party (unbeknownst to her she was holding it for Indi) and sarcastically voiced her disapproval of her drinking, again hinting at her pregnancy.