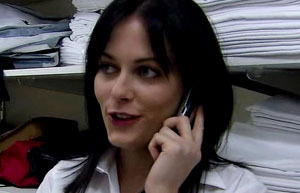 Trish was Kirsty’s co-worker at The Sands and showed Kirsty the cleaning schedule on her first day before suggesting that she should start with the bathroom. She commented about Kirsty’s disasterous shift in the bar and suggested that Kirsty couldn’t afford to make any more mistakes. Kirsty replied that she had no intention of it, that she needed the money. When Kirsty left the room Trish made a quick phone call and told whoever was on the other end of the phone that she had found another girl [Kirsty] who is perfect because she is gorgeous and desperate for money.

A few days later Trish and Kirsty are in a big linen closet when Trish bought up the subject of hostessing. She insisted that everything was above board and that some of the resort’s management were aware but turning a blind eye provided that things were kept discreet. Kirsty told Trish that she felt that it would be cheating on Miles but Trish tried to convince her otherwise. She said that there was a hostessing gig on that night that another girl couldn’t do and she reminded Kirsty that she needed the money.

Trish continued to pester Kirsty, calling her at home until Kirsty told her that she definitely didn’t want to be involved anymore and suggested that Trish shouldn’t ring Kirsty at home anymore. Kirsty reiterated to Trish that she totally wanted out of the hostessing game but Trish told her that if Kirsty does that, she can say goodbye to any housekeeping shifts. Trish told Kirsty that she had lined Kirsty up with a guy tonight and if she doesn’t have an answer by this afternoon, she’d know that Kirsty no longer wanted a job at all.

After Kirsty knocked on a room door and got no answer, she entered and was making the bed when a man exited the bathroom. He told her that he had heard that Kirsty was a good looker and that he would be very pleased if Kirsty accompanied him to dinner. Kirsty made it clear that she wasn’t interested. When she exited the room she told Trish that she felt cheapened and that this was the last straw – she was quitting her job at the resort. Trish wasn’t seen onscreen again.