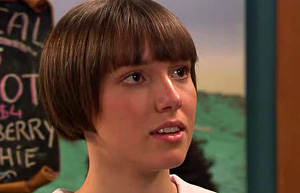 We first saw Asia when the students were running for school captain. She had a lot of confidence and she was sure she was going to win. Aden shot down one of her policies which would make the school canteen go Vegan. She said that animals had rights, but Aden told her they don’t. She walked off and said that there was no need to waste paper on people like him.

However, Asia didn’t become school captain. Nicole won. But she was soon stripped of the title when Melody told Mr. Bartlett about Nicole’s runin with the cops where she was driving on a suspended license. Asia then became school captain.

A few months later, when Kane crashed his car into the building where the formal was being held, we saw Asia once again. While panic ensues all around her, she loses her cool and begins to freak out and starts to tell everybody that there is a gas leak, so then everybody starts to panic even more. Nicole tells her to get it together and help people stay calm.

At the hospital when the whole ordeal is over, Asia tells Nicole that she wasn’t a great school captain because she panicked when Kane’s car crashed into the building. The next day, Asia stepped down as school captain as she was still badly shaken by the accident.