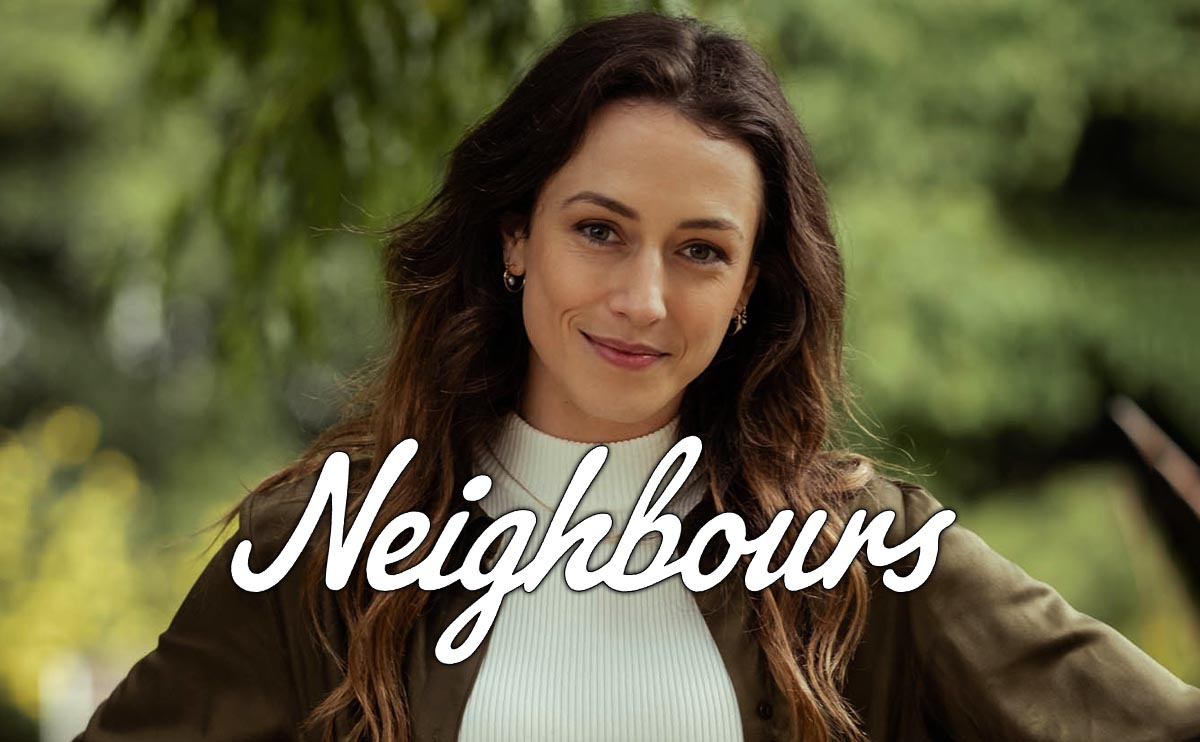 Coming up on Neighbours in the UK, Levi learns Felicity’s shocking secret, but only after he dumps her. What has she been hiding?

These episodes will air from Monday 15th November.

This week, as Felicity’s (Isabella Giovanozzo) relationship with Levi (Richie Morris) heats up, her secret plan with Ned (Ben Hall) is exposed. 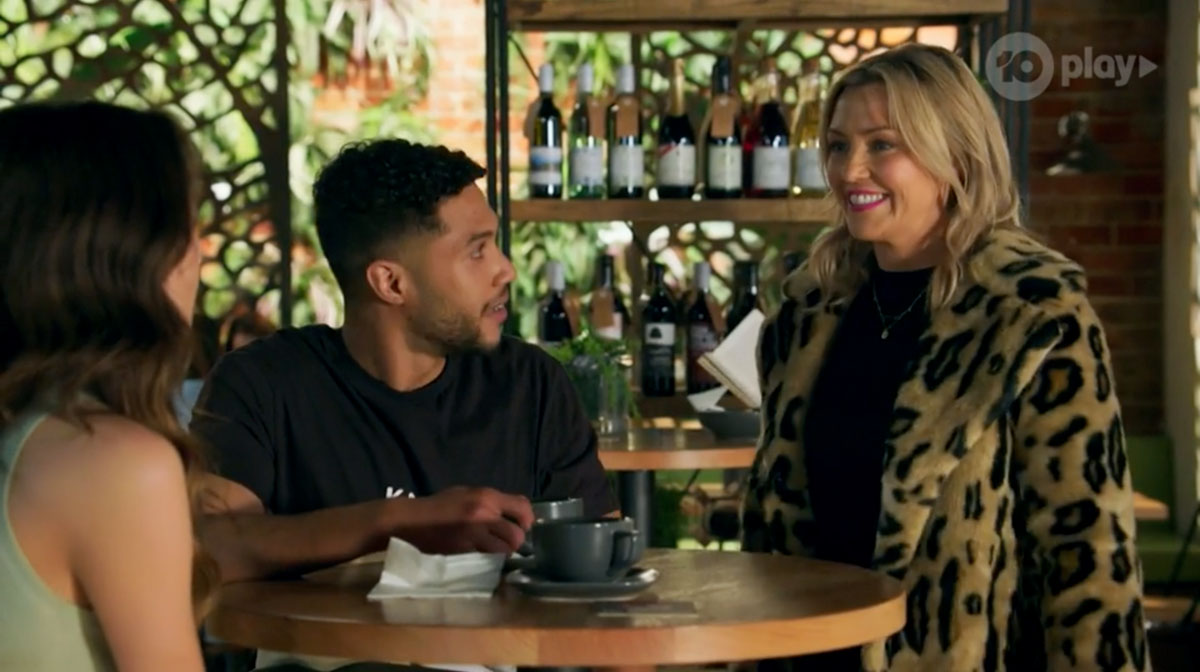 As viewers will be aware, the ongoing open relationship saga that is Levi, Amy (Jacinta Stapleton) and Ned has been going on for months now, and it’s no surprise that when Felicity showed up there was going to be some animosity.

However, when Levi first suggested to Amy that, if she can date two men, perhaps he could date two women, did he really believe that Amy would resort to throwing his phone into the lake to stop him and his new love interest from getting chummy?

Unfortunately for Amy, it didn’t work, and Felicity and Levi were soon back in touch and enjoying a third date together. But now it seems that it’s other partner Ned who is trying to cause a rift between his girlfriend and her other boyfriend. 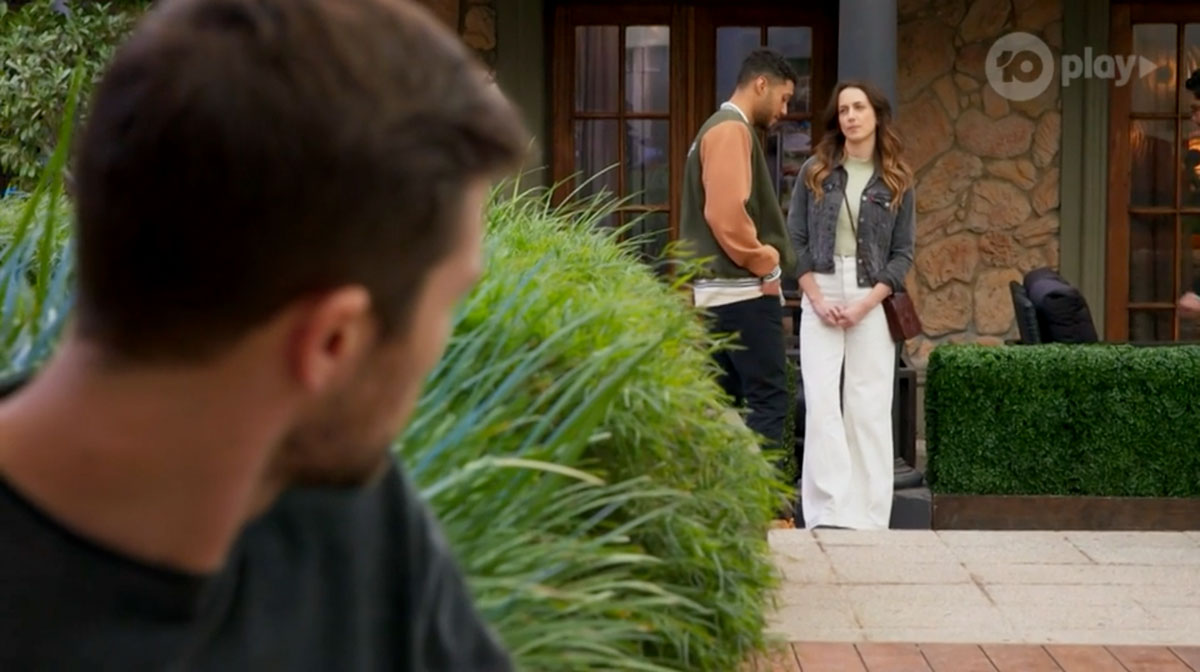 Last week, having noticed how rocky things were becoming between Amy and Levi, the artist approached Felicity and the pair hatched a plan – they were going to do whatever it took to drive a wedge between Amy and Levi so that they could happily be in monogamous relationships with them.

Now, the plan is in motion and it all starts with Felicity and Amy deciding to hang out together. After all, with everything between Levi and the new firefighter heating up, it makes sense that Felicity would get to know his other girlfriend.

As soon as they get to the Waterhole together, it’s obvious that there is awkwardness between the pair. The tension is palpable as the pair discuss everything from fashion to Levi’s bedroom antics. For one of them, it is pure joy seeing the other squirm.

But it seems that someone has clued onto their plan. Hotel worker Harlow (Jemma Donovan) approaches Ned, curious about his attitude towards Levi and Felicity. Not long later, the truth about his and Felicity’s deception comes out.

“They’re not happy – I don’t think they’re going to last,” he reveals to Harlow, who quickly realises what is going on. Wanting in, Harlow offers her services. This piques something in Ned’s mind, and he has an idea for the next part of his plan. 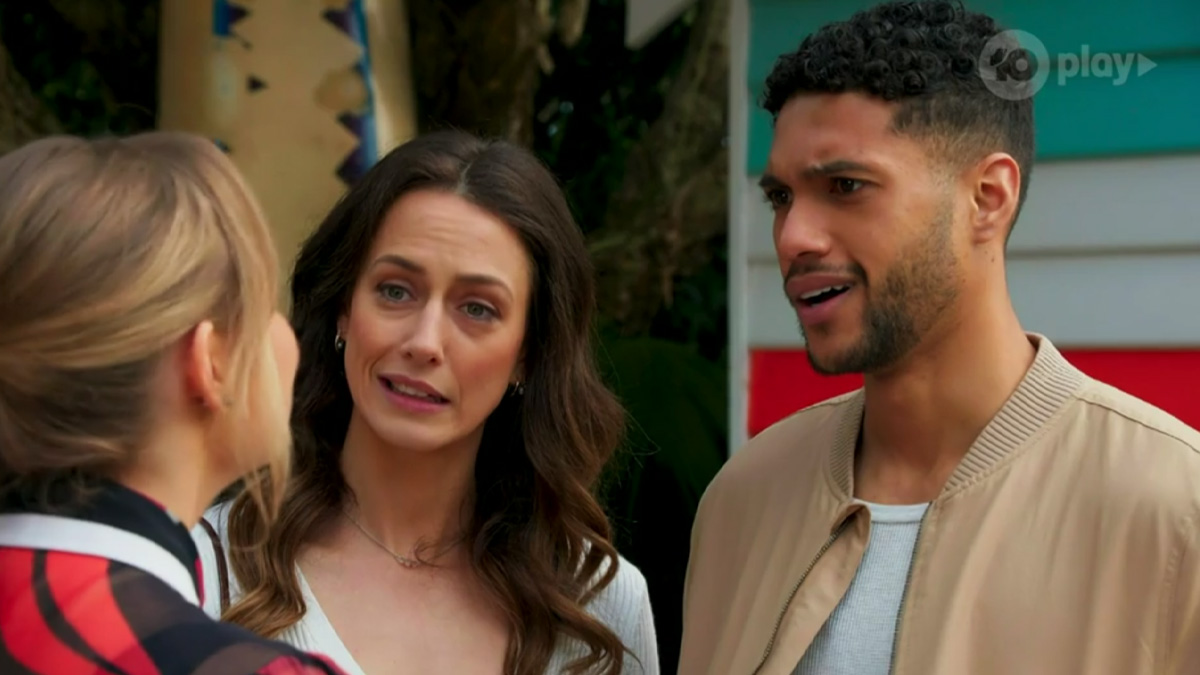 Back at the Waterhole, Amy and Felicity discuss fashion, and it’s here that it becomes apparent that the two women couldn’t be more opposite if they tried.

Amy loves all things fashion. Felicity, however, states she couldn’t be less interested.

“You don’t want to be fighting a wall of flames in heels,” she says to Amy.

It’s not long before Felicity circles the conversation back around to Levi, asking Amy whether he’s into roleplay. If he is, she might need to visit the costume store! 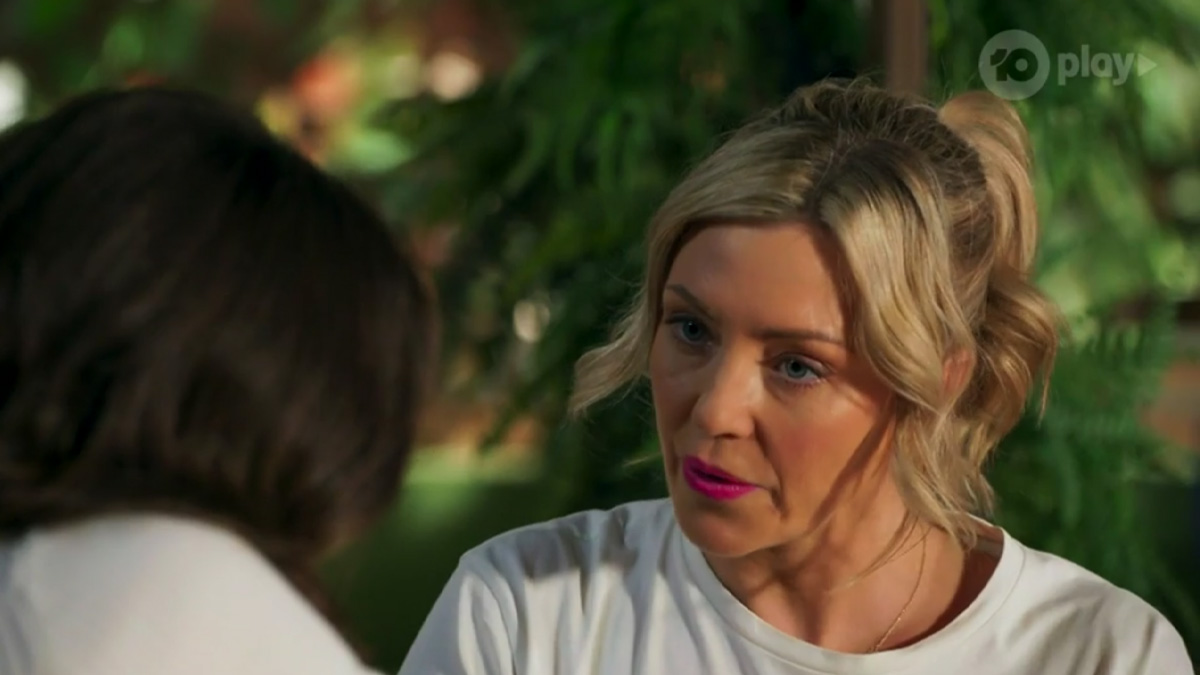 The conversation becomes a bit much for Amy, who is feeling more and more uncomfortable with the image of her boyfriend and Felicity in bed together, and feels like she’s been saved by the bell when Levi walks in. Taking the opportunity, Amy heads to the bar.

After the catch-up is over, Ned and Felicity find the time to discuss their plan, and he tells her that he has the next step ready. Not long after, it’s revealed that Harlow has organised a ‘free’ room for Levi and Felicity to spend the night in at the hotel.

The catch? Ned actually paid for it.

And when Harlow discusses this, with Amy uncomfortably within earshot, the grand plan comes undone.

When she finally runs into Ned, she’s seething, and asks him point blank a question that turns his stomach. 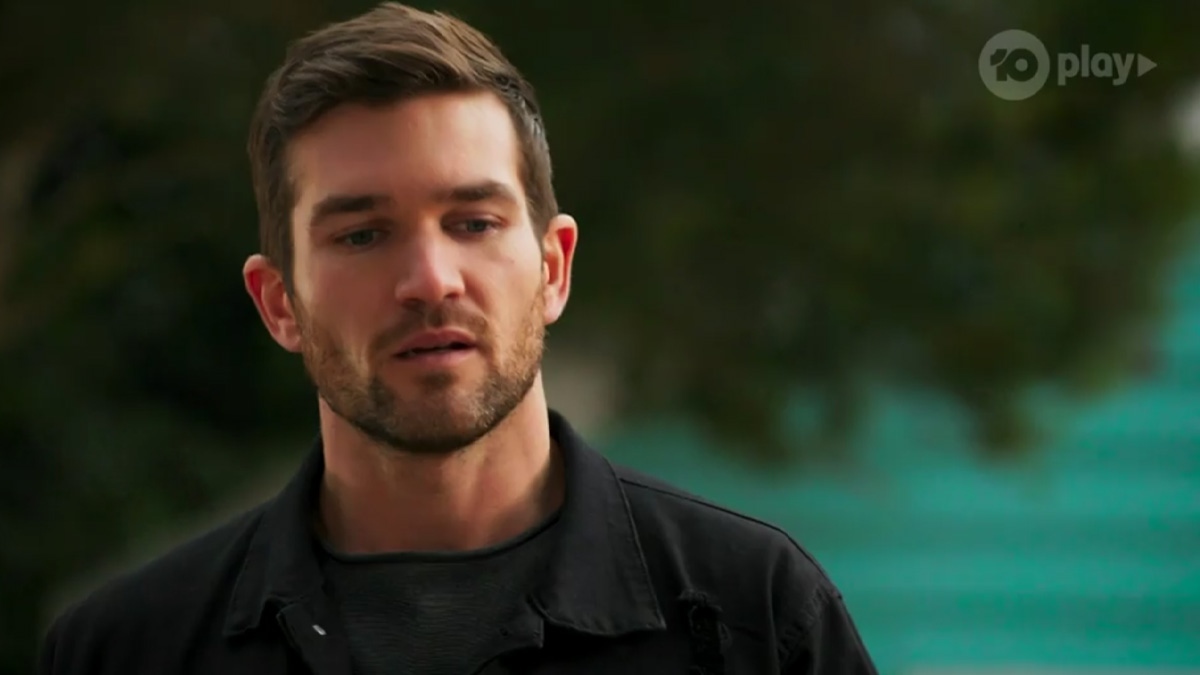 “We’re not going anywhere, not until you tell me why you booked a hotel room for Levi and Felicity?”

Although he tries to hide the truth, Ned realises that the game is up and texts Felicity to let her know that Amy has uncovered their ruse.

Realising she has to tell Levi, she comes clean too. 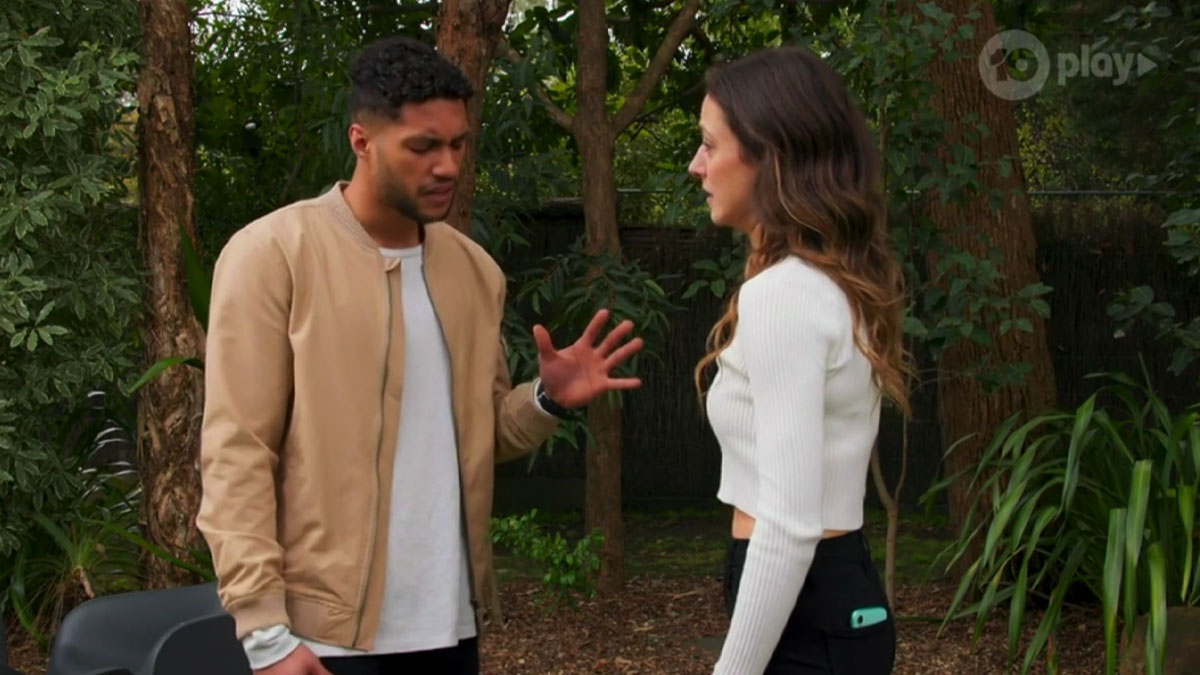 A furious Levi can’t help but berate her and ends things there and then. A polyamorous relationship needs to be built on honesty, and Felicity definitely hasn’t been honest.

However, it seems that Felicity’s influence on the trip’s relationship is far from over. The next day, she makes a phone call and drops a bombshell that could change the entire fabric of Levi’s relationship with Amy and Ned… 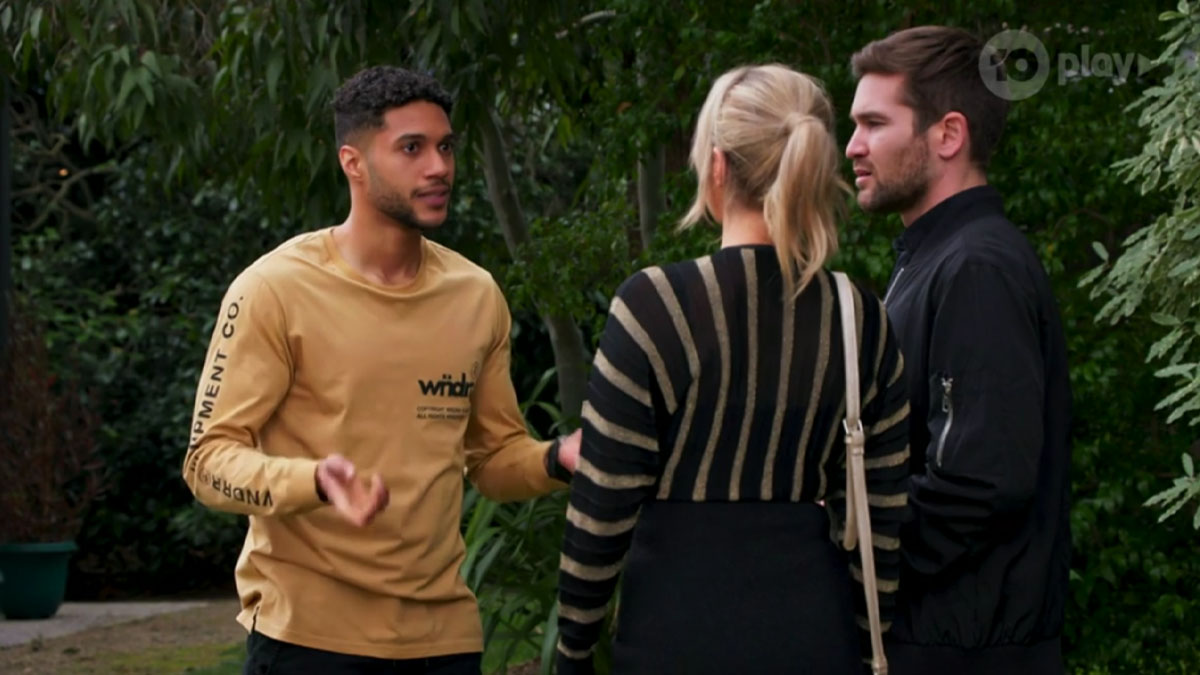 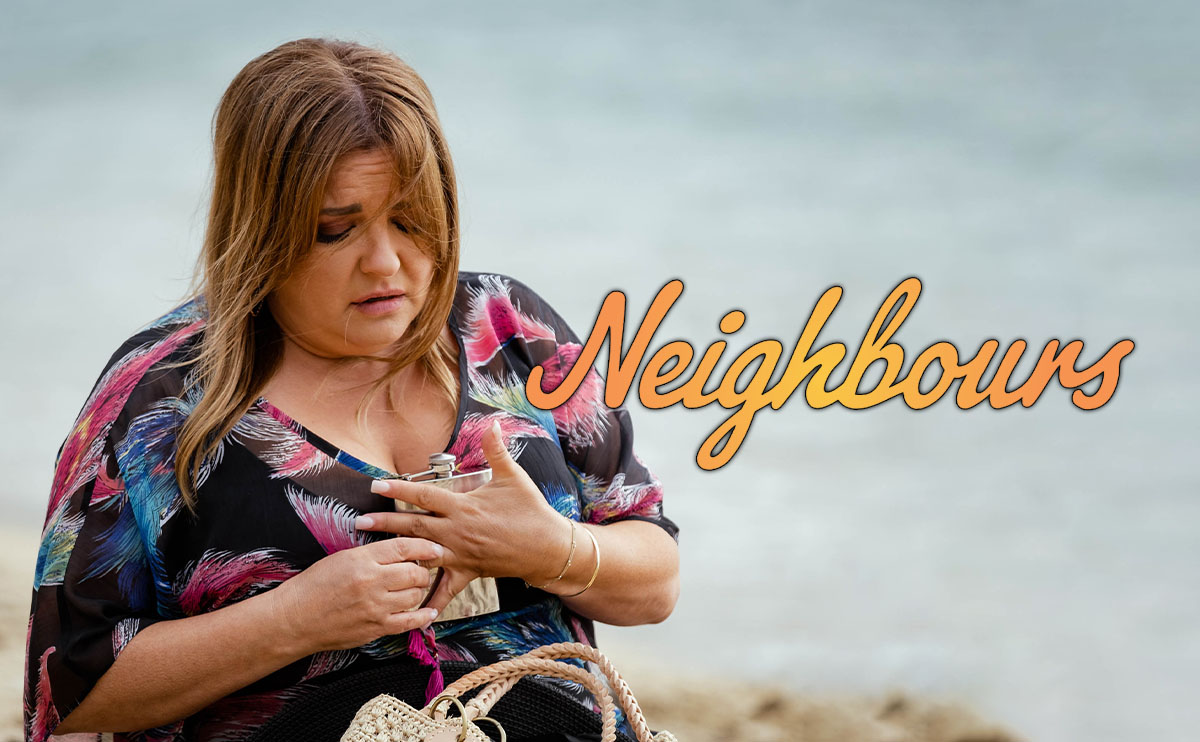 As Paul’s presence in her life becomes too much, Terese succumbs to her battle with alcohol. Meanwhile, Glen returns to the Robinson orbit after 30 years.

Here’s the full spoilers for the next two week’s Neighbours in the UK:

Before Kyle and Roxy know what’s hit them, they’re getting intimacy coaching from Sheila.

Hendrix and Mackenzie are left mortified when Karl and Susan assure them they’re comfortable with them exploring their new relationship freely at No. 28.

Felicity continues to work with Ned to drive a wedge between Levi and Amy.

Both Levi and Amy are furious about the games Ned and Felicity have been playing.

Kyle is furious that Roxy told Sheila about his cancer diagnosis.

Amy backs out of telling Chloe that Mick is squatting in the hotel.