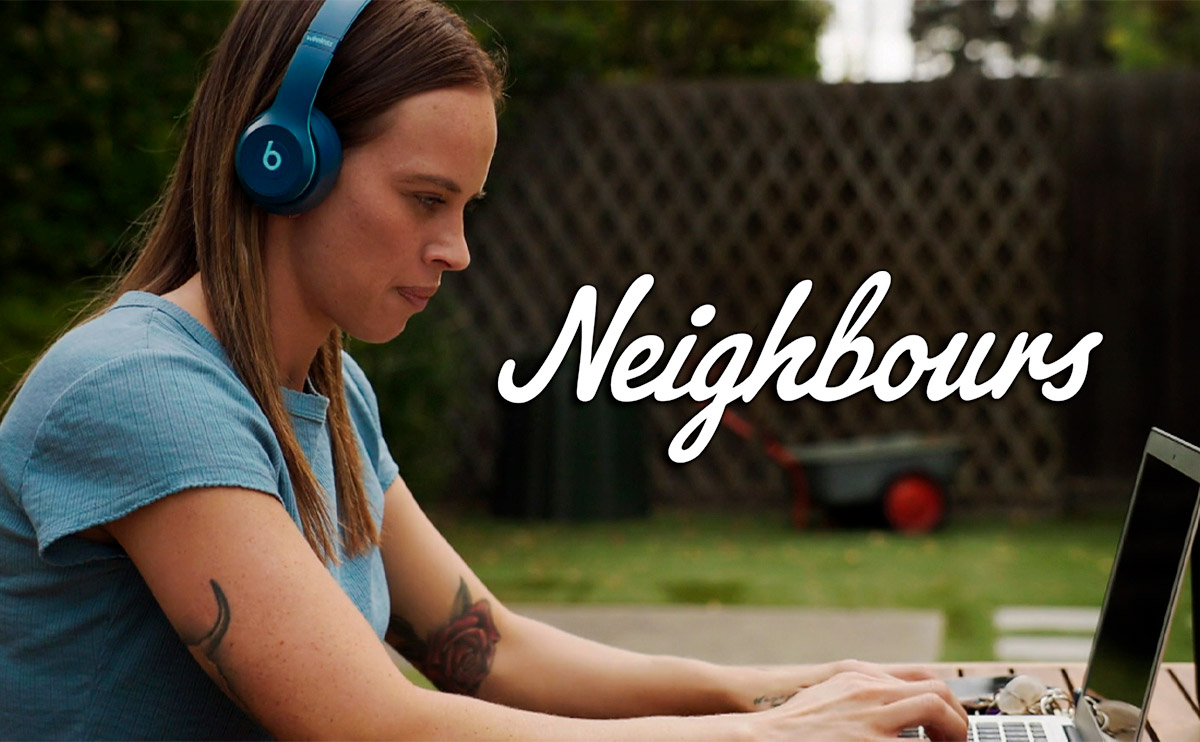 Coming up on next week’s Neighbours in the UK, Bea drops the first episode of her new podcast, much to the surprise of both Karl and Levi. Meanwhile, Jane learns that Curtis double-crossed her.

Bea Nilsson’s (Bonnie Anderson) podcast project has been keeping her busy for several weeks now and she’s finally ready for it to hit the airwaves. It’s a chance for her to give her side of the Finn Kelly story, a rebuttal to the one-sided story presented to the world by Olivia Bell in her book ‘The Devil You Know’. 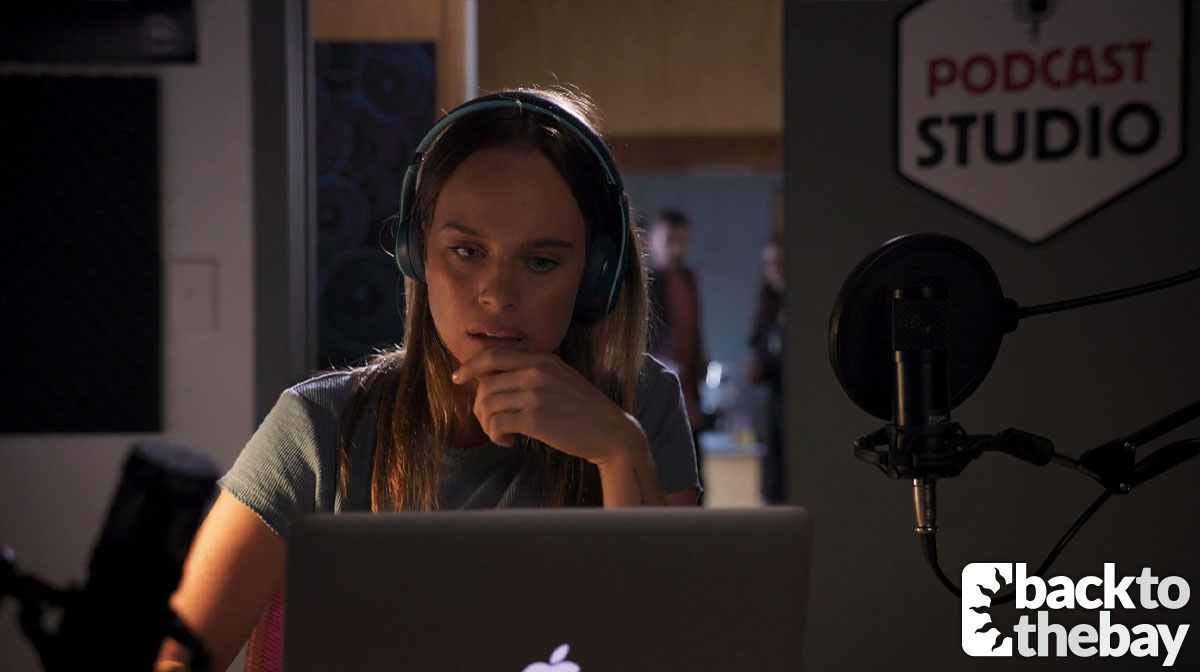 After agonising for weeks over the concept, Bea has finally reached an end product that she is happy with and cannot wait for the listeners to hear it.

Unfortunately, there are two people that may have something to say about it. One, about the process and the other, about the content.

The hardest part about producing the podcast for Bea has been trying to keep her uncle Karl (Alan Fletcher) and his ideas at bay. 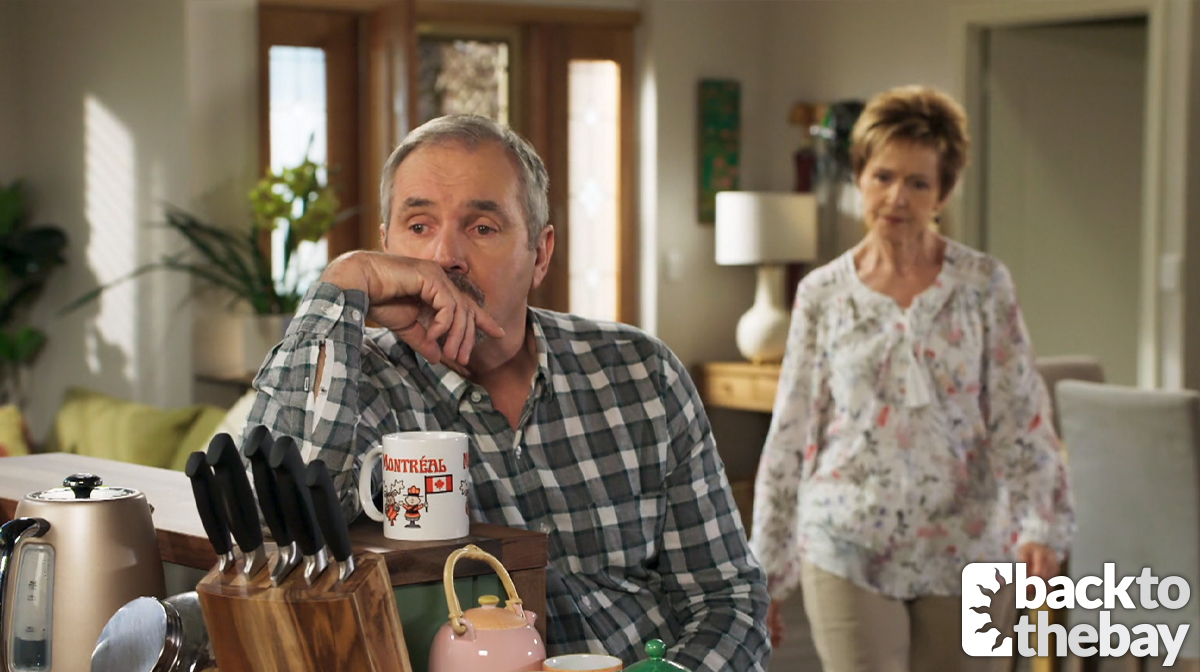 The doctor was initially convinced he would be co-hosting the podcast with her, having too much time on his hands after his altercation with Olivia left him suspended from work at Erinsborough Hospital. Unable to say no to his pushiness, Bea entertained his initial ideas, but soon realised just how much he wanted to control things.

Eventually, Karl’s nagging got too much and in an attempt to keep him away, Bea sought out Kyle (Chris Milligan) to distract him, whether it be with exercise or with work at the tram. Luckily, Karl took the bait and left her alone to work on the podcast. This week, Bea asks Kyle to continue his efforts at distracting Karl while she puts the finishing touches to the project.

It becomes too much for the handyman though and Kyle is forced to give in, telling Karl the truth about the podcast. 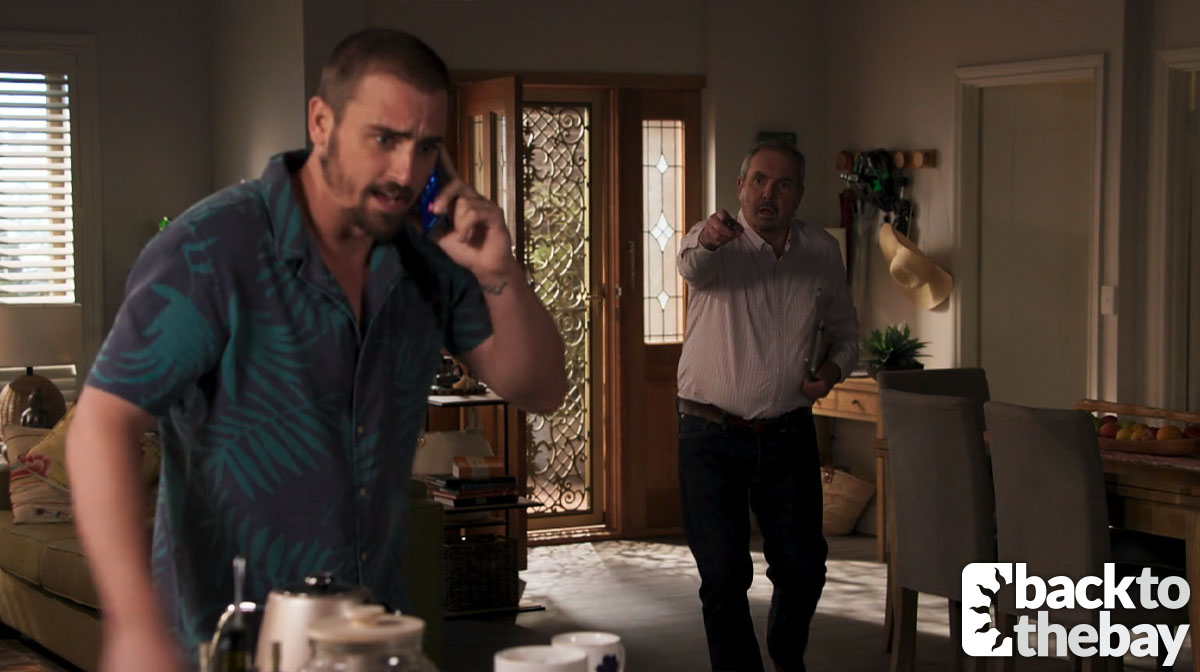 Karl calls Bea straight away, telling her he’s on his way to The Hive to give the podcast his final approval. Finally realising she needs to give him some tough love if she wants to keep hold of her project, Bea tells him outright that she doesn’t want him around. In fact, he’s not needed for another four episodes.

“You’re number five,” Bea confirms to Karl, referring to the first episode in which his part of Finn’s story features.

Shocked, Karl can’t believe he’s so far down the list. But it makes sense as Bea explains that Elly (Jodi Anasta), Sheila (Colette Mann) and Susan (Jackie Woodburne) are before him, having played much bigger parts in Finn’s schemes. Well, it makes sense to everyone except Karl… 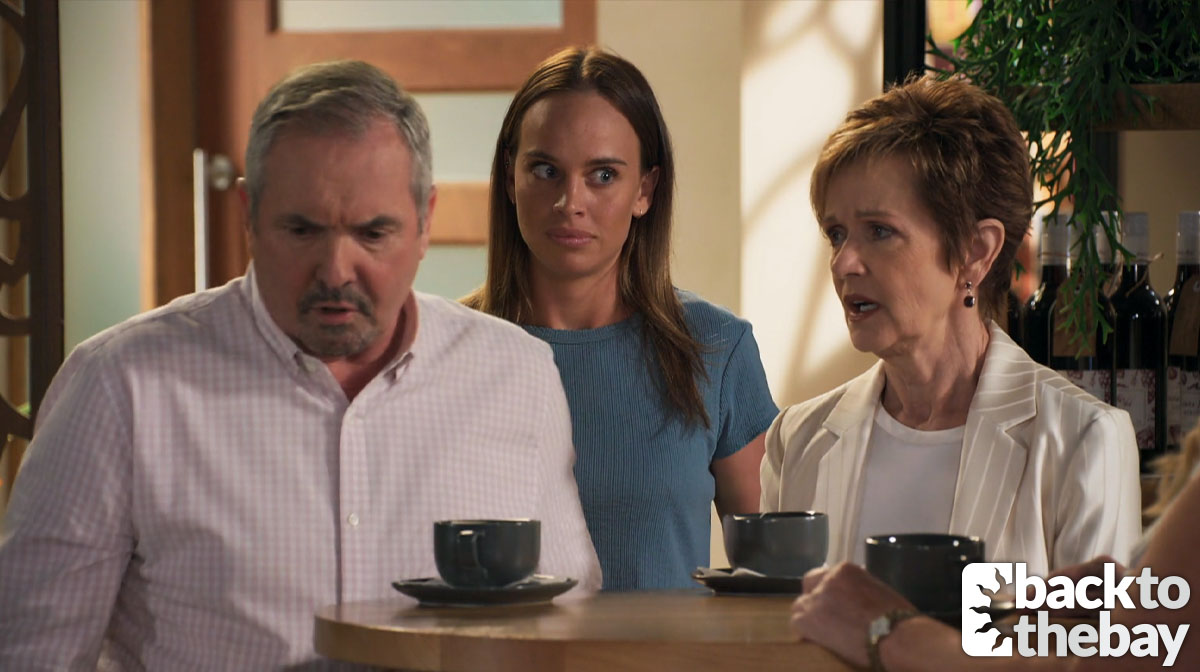 Hurt, Karl refuses to talk to Bea, and even leaves his lunch at The Waterhole when she approaches Susan for help.

Karl “having a sook”, as Susan puts it, is the last thing Bea needs at the moment. She’s worried about the reception her controversial podcast might get, and, still feeling unstable in her relationship with Levi, she seeks out Susan to give the final approval on the pilot episode. 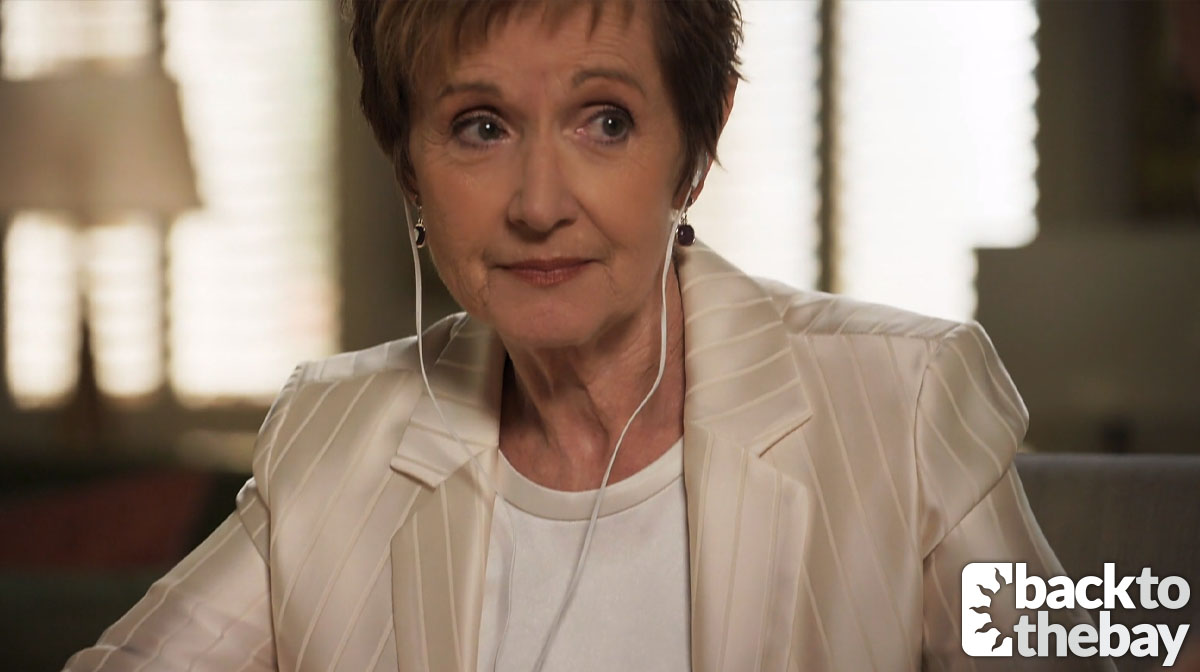 Listening to it, Susan is moved. However, she is a little concerned about what Bea’s boyfriend Levi (Richie Morris) will think.

Confused, Bea questions why he would be unhappy with it. When Susan explains that Bea says some things in the episode that Levi might appreciate hearing from her first, she realises she needs to pull the plug on the launch.

She calls Ned (Ben Hall) to stop him from putting the podcast live, but when she can’t get hold of him, Bea rushes down to The Hive… 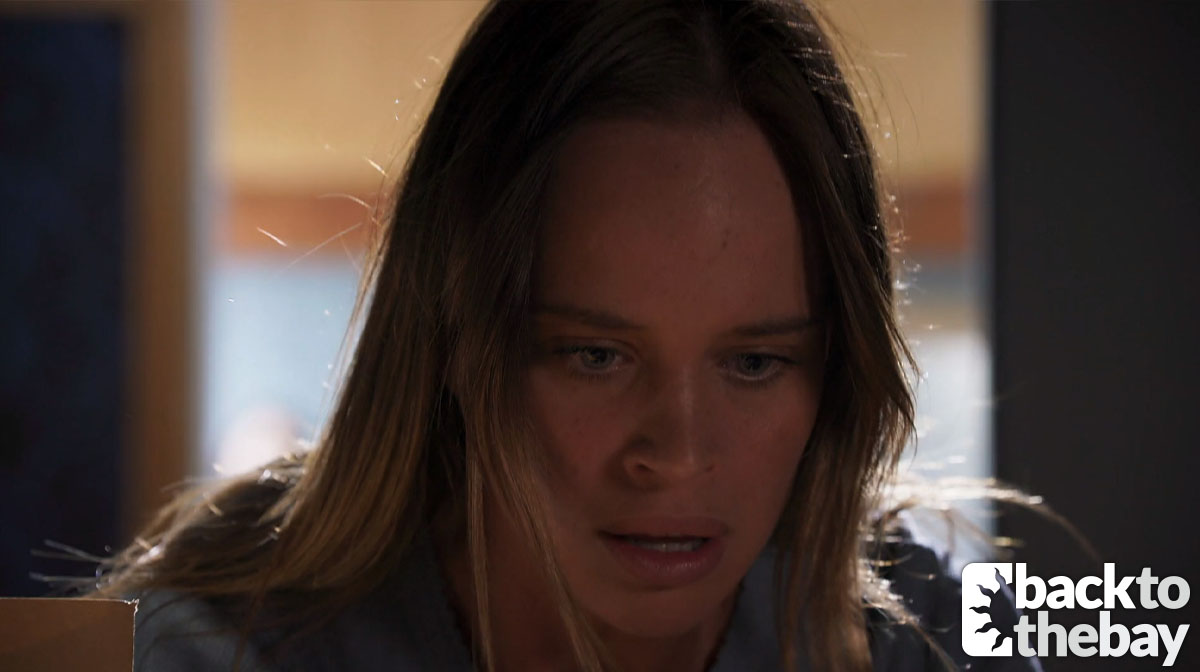 …but it’s too late. The episode has already aired! Deflated, she can’t believe she didn’t think about Levi before publishing it. 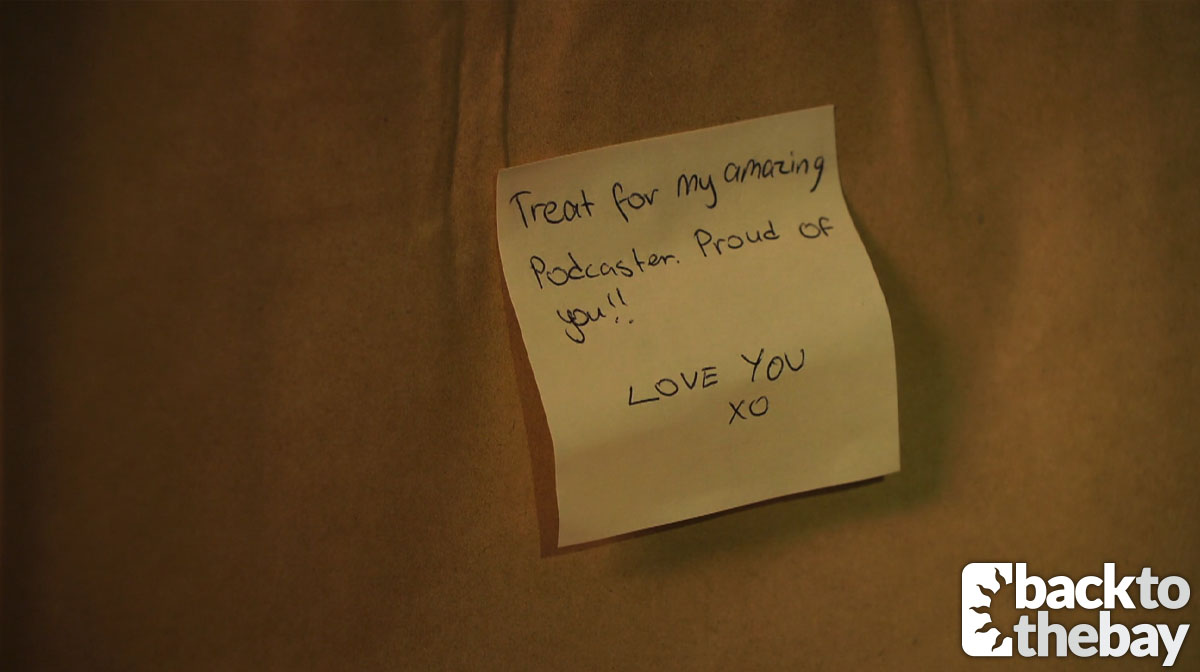 To make matters worse, she finds a present that Levi left next to her laptop, with a note attached reading ‘treat for my amazing podcaster. Proud of you!! Love you xo’.

Meanwhile, over at No. 26, Levi hits play on Bea’s podcast and listens proudly to his girlfriend’s creation. He’s about to be hit by a big shock. 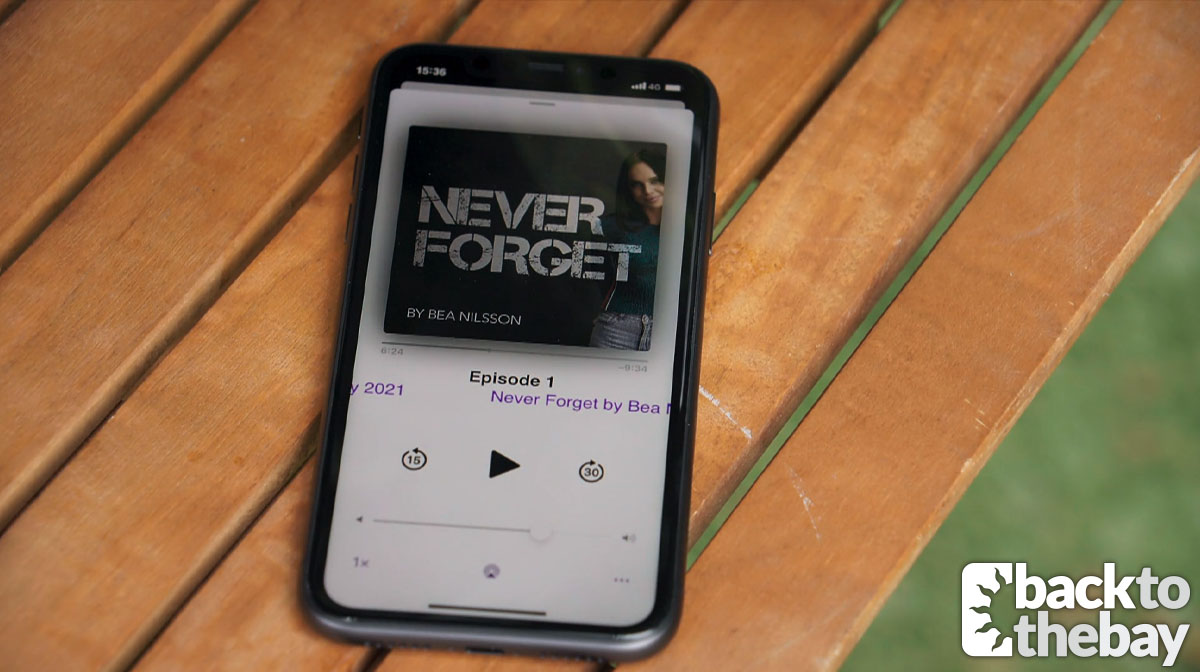 It’s not long until he hears something that makes him question his entire relationship – the exact thing that Susan thought Bea should talk to Levi about first.

“I’ll never be able to fully trust a man ever again,” Bea explains to thousands of podcast listeners, including Levi.

“No matter how wonderful he is, or how much he loves me, my walls will always be up.” 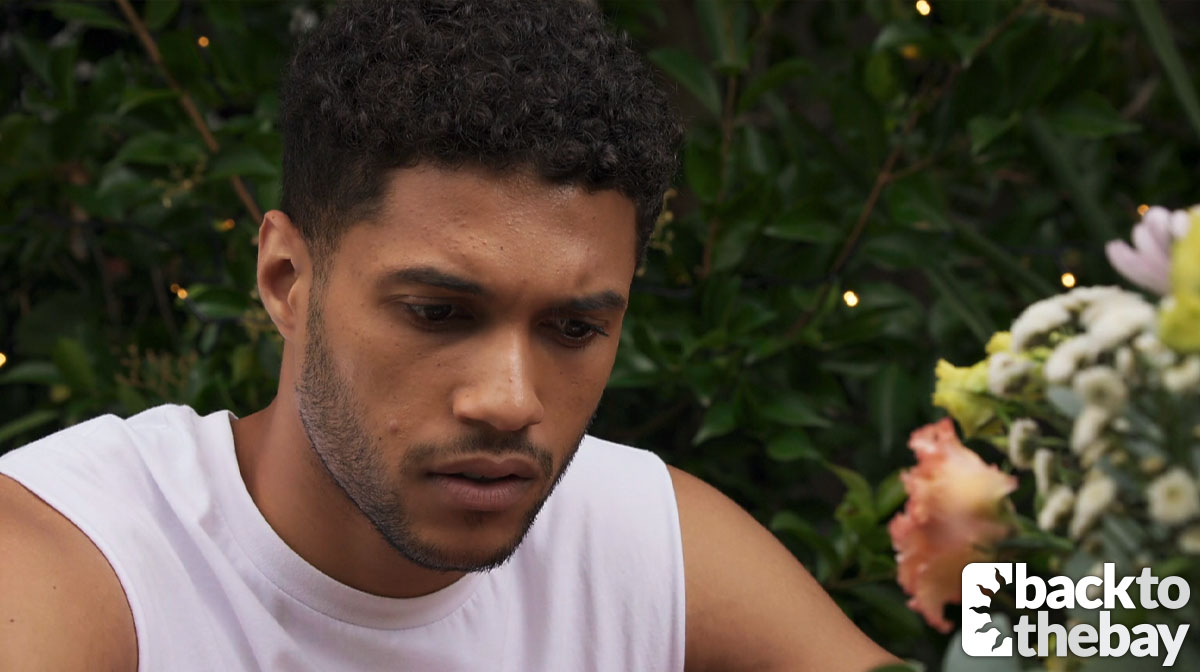 As Susan predicted, Levi can’t help but feel hurt. Does this mean his whole relationship has been built on distrust? With the pair already on shaky ground after the incident at the garage, where will this leave Levi and Bea?

Elsewhere, Jane’s (Annie Jones) trip to Mildura has given her a new view on the Year 13 program and she is excited to implement some new initiatives to better the Erinsborough High program. 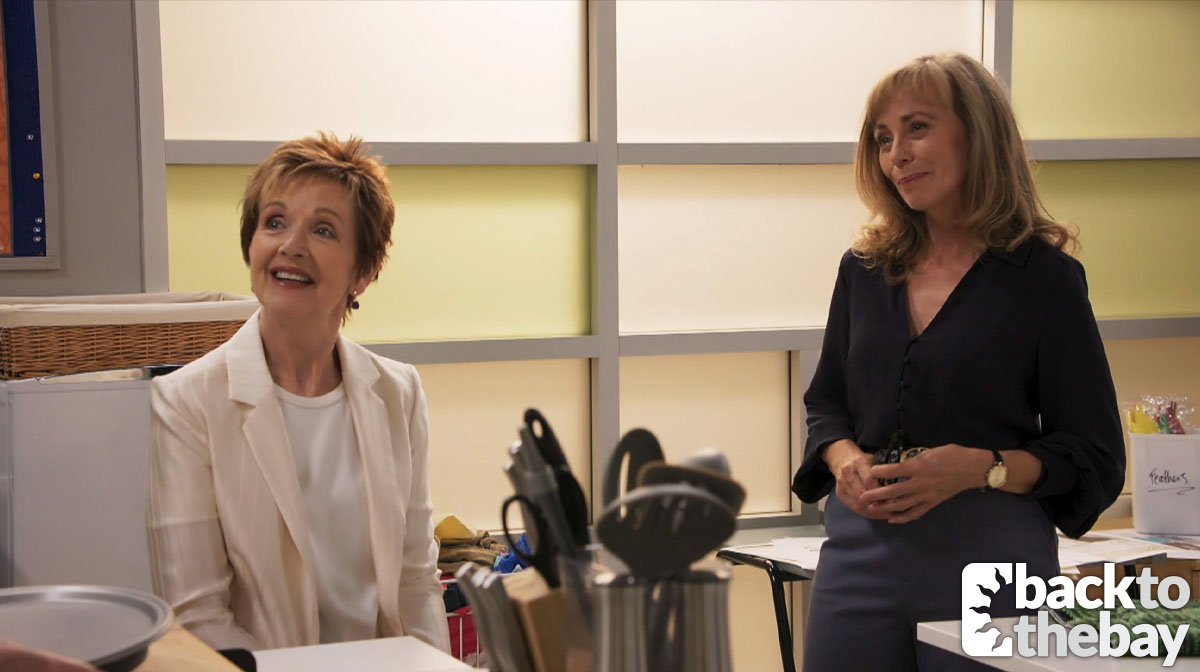 Unfortunately, her time away hasn’t lessened the tension between her and fellow Year 13 teacher Curtis (Nathan Borg), with their rift more evident than ever.

Luckily for Jane, Curtis has decided to take a step back and give her back the complete control she is after.

But it’s clear he’s still not 100% supportive of her decisions when she believes punishing Hendrix for something minor is the right thing to do. 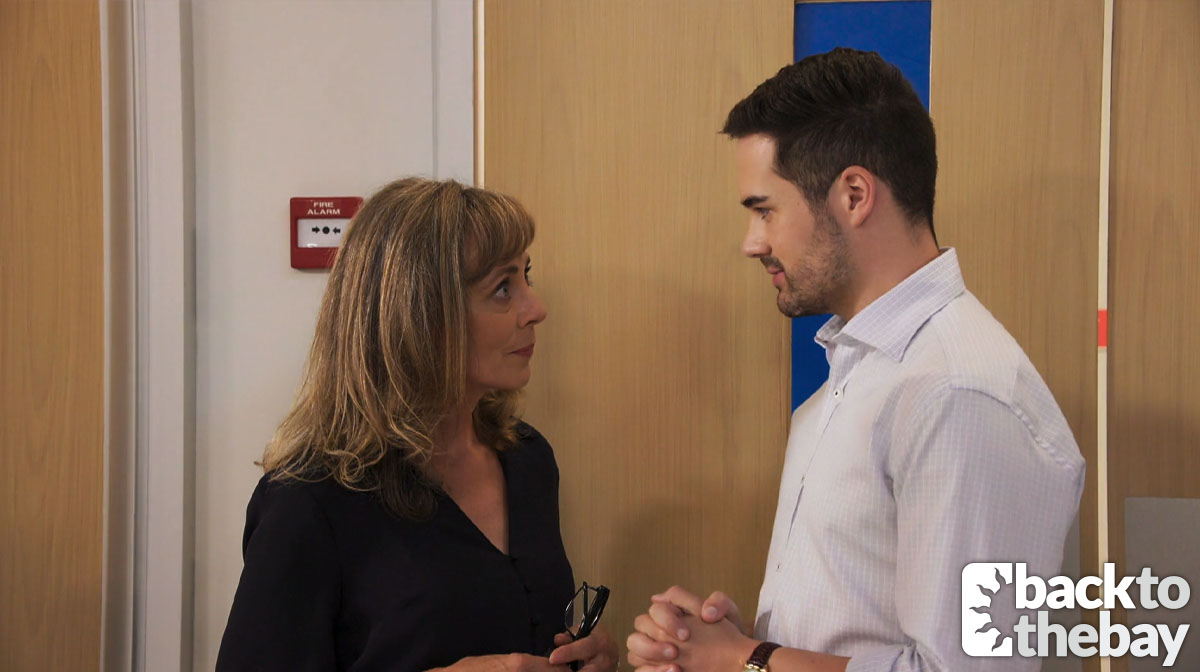 “The teachers at Mildura College all agreed with me about increased accountability,” Jane assures Curtis, who can’t help but roll his eyes.

Later that day, Jane takes a moment to sit down with Curtis to discuss her time in Mildura. The pair are interrupted by a text from Renee, a teacher at Mildura College, who asks her to say hi to Curtis.

Perplexed, Jane questions how Renee knows Curtis. He briefly mentions that he did a teaching rotation there, trying to avoid the subject. Quick to realise something weird is going on, Jane questions whether he is still in touch with the principal.

Put on the spot, Curtis claims the batteries in his hearing aids are dying and attempts to scurry off, but Jane calls his bluff. 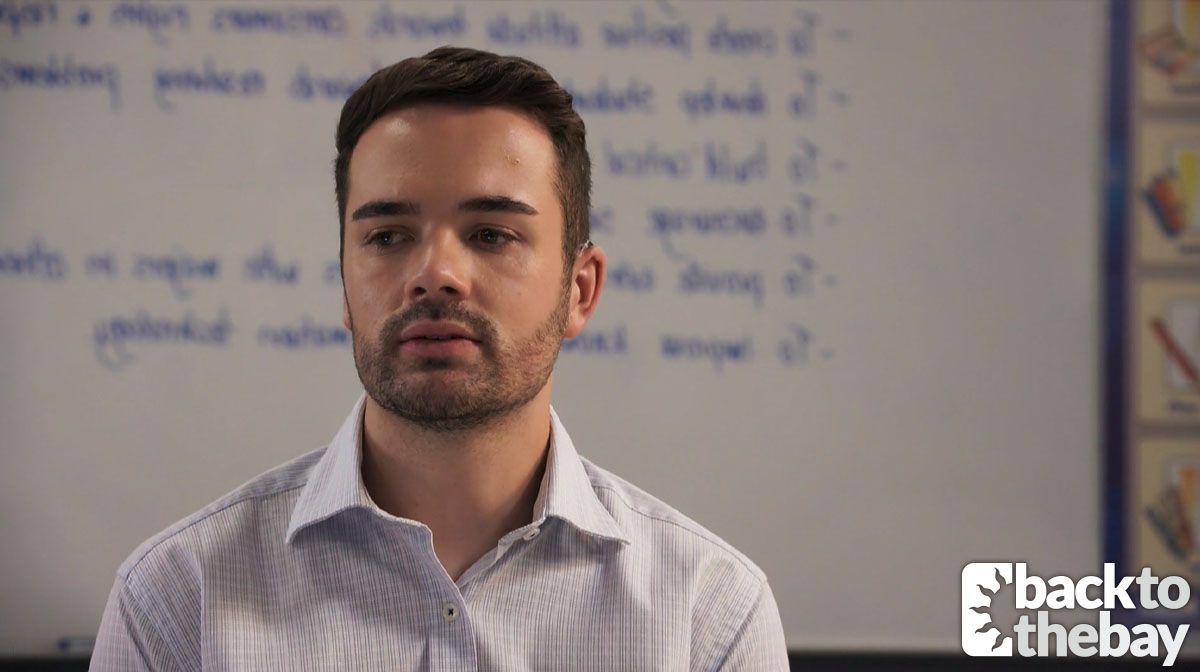 Realising he’s been caught, Curtis has no choice but to come clean: he’s still in contact with the Mildura College teacher, and their last contact was only a couple of weeks ago… around the time that Jane was asked to go to Mildura.

As she puts two and two together, Jane realises that Curtis asked the principal of Mildura College to invite her over. Was he trying to get rid of her so he could take over the project?

“I was thinking I was sought out because I’m good at my job,” Jane says, distraught that Curtis has deceived her.

He attempts to justify his decision, claiming he just needed space, but Jane thinks he’s gone too far. 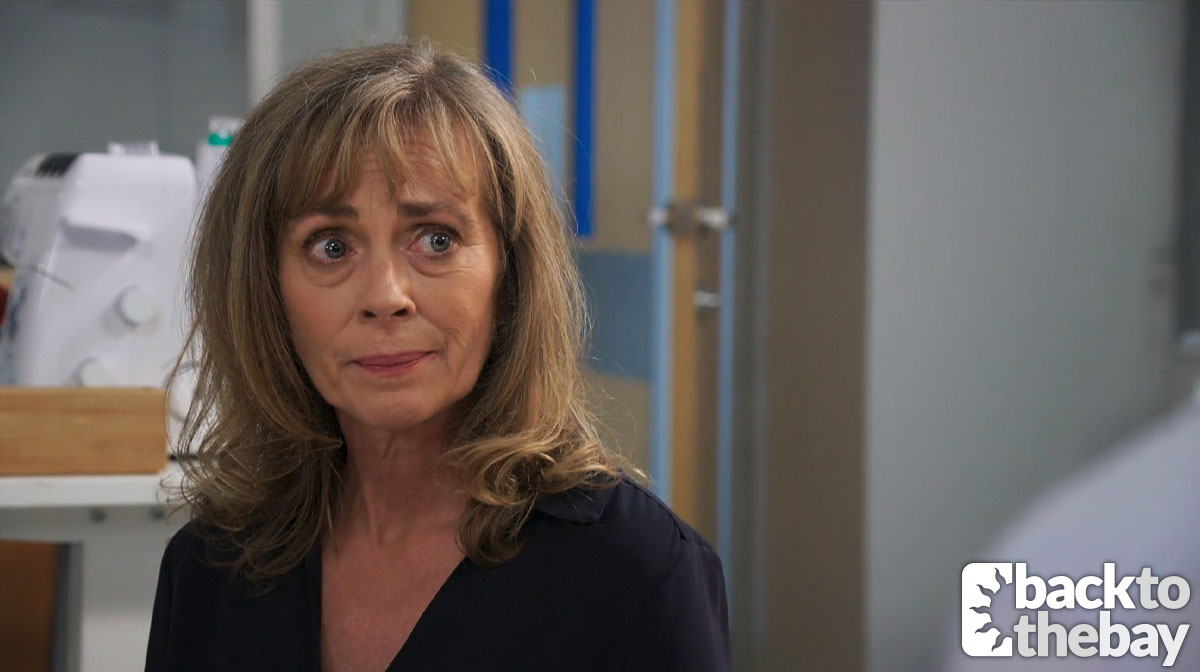 “Just when I thought we were becoming a team.”

It’s clear that the rift between the colleagues is widening by the day. Will they be able to move on from this for the sake of Year 13’s one remaining student?

Susan has concerns regarding some of Bea’s revelations in her debut podcast episode and how it might affect Levi.

After her work trip to Mildura, Jane is on a high and returns with a renewed confidence for her role at Erinsborough High.

Stunned by Hendrix’s declaration of his feelings, Mackenzie is unsure how to respond.

Levi admits to Bea that he is hurt by the idea she will never be able to trust him.

Nicolette decides to coach Chloe and Aaron in the upcoming volleyball competition.

Ned and Sheila #2 continue to connect over art, leading to a heated and unexpected moment together.

Rattled by their moment of intimacy, Ned and Sheila #2 can’t help feeling awkward around each other.

After suggesting they explore something more, Toadie mistakes Mel’s flirting as disinterest and is left disappointed.

When Mackenzie discovers Toadie is having a secret “work meeting” with Angela Lane, she shares her suspicions with Susan and Karl.

Susan struggles to accept that Toadie is romantically involved with Angela Lane, making the mistake of telling Angela how much Toadie deserves a good woman in his life.

Brent’s gratitude for Paul prompts Harlow to finally open up to the possibility of forgiving him, unaware that Paul is about to go behind her back once again.

After the green light from Susan, Angela turns up at Toadie’s house and makes a bold play for his affections.

Driven by his concern for Harlow, Paul has a plan to ruin Brent’s chance of release by urging Holden to paint him at the criminal ringleader of his gang.

In trying to show their support for Toadie, the Kennedys invite a thrilled Angela to dinner, leaving Toadie confused by the unexpected dinner guest.

Harlow is devastated to learn that Holden has changed his story.