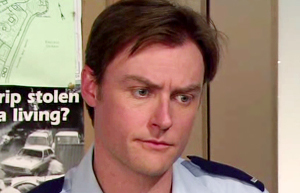 George Watson was Jack’s police partner and initially seemed like a decent guy until he saw Jack conspiring to get charges dropped against Martha and told him that it was good to know there was other cops like him around. Despite knowing that he was dodgy Jack couldn’t do anything about it because of what George had on him.

He was forced to watch as George took bribes from people he picked up including Jonah Abrahams but Jack’s non-compliance backfired when Jonah told Martha. Confronting him, Martha insisted that Jack hand George in but Jack told her he needed time and would deal with it. He threatened George that he wouldn’t stand for anything more and was relieved when George seemed to back off.

Still convinced he was up to no good Jack tailed Doctor Lewis Rigg to the house but his attempts to catch them doing something dodgy backfired when George’s secret was revealed to be a seriously ill daughter. Playing the sympathy card, George was able to keep Jack quiet but what Jack didn’t know was that George was setting him up.

Having invited a known criminal to a party at his house George ensured that a picture was taken of Jack with the criminal and planted suspicion in McGrath’s eyes that Jack was up to something dodgy. When an armed robbery went off Jack and George were in the vicinity and George raced into the bank leaving Jack to call for back up. In the bank George pretended to be held hostage, not realising that Martha was hidden and had heard evidence that he was behind the robbery.

Making his escape Jack clicked onto what was going on when George failed to apprehend the robber and George turned his gun on Jack, shooting him. With Jack in a coma, George tried to pin the robbery on him but Martha recognised his voice and went to the police. George attempted to silence her but Fitzy managed to rescue her and George was arrested.