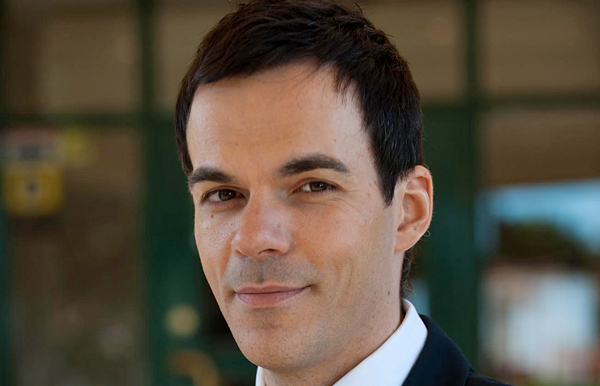 Robert Robertson was first sent to Summer Bay from the city to investigate the death of Grant Bledcoe. He booked a van at the caravan park, bemusing Alf by being very choosy about the number of van he wanted. He then bemused Charlie, Angelo and Georgie with his sudden appearance where the body had been discovered, announcing he was taking on the case. He gave several contradictory explanations for his name, telling Alf his mother wanted people to remember it, Irene that he lost his surname in a divorce, Miles that he changed it for a bet and VJ that he wanted a superhero name. He also told Georgie he never had chocolate in his coffee, even though he asked Leah for some.

Robertson quickly identified Charlie, Angelo and Ruby among his suspects. He gave the first two a thorough grilling about their reasons for wanting Grant dead but when he called Ruby in he simply told her to hold her arms in various positions and then clap like a seal. He was refused permission by Angelo’s superiors to suspend him from duty but did suspend Charlie. He noted there seemed to be inconsistencies in Angelo’s file and suspected there was more to him being back in Summer Bay than seemed apparent. He went to interview Ross, taking Charlie and Morag with him, and spent time reminiscing about Ross’ old cases before simply asking him if he killed Grant or not.

He was taken with Leah, saying she reminded him of a picture he saw in Athens. He asked her if she could verify Charlie’s whereabouts the night of Grant’s murder and told her a parable about a man trying to save a scorpion from drowning even though it kept stinging him because that was in both their natures. He then asked her out on a date but they had to put it off because he was busy with the investigation and she was tired after work.

He followed Angelo on his investigations and showed Charlie photos of Angelo talking to strippers, causing a rift between them. When Morag tried to get him to back off, he told her she was a suspect as well. He organised a search of the fish market where Ruby worked. When Ruby and Xavier claimed to have seen Charlie asleep at the time of the murder, he provisionally accepted their story and then took her and Angelo to stakeout the fish market, saying he worked out it was where Grant was killed from the mud on his shoes…and the fact they found his smashed phone there. He used his teddy bear, Gus, which he had been keeping at the station and claimed contained a surveillance camera, as a relationship guidance tool between the pair, getting them to work through their trust issues before showing Charlie more photos that confirmed Angelo had identified himself to the strippers as a police officer. Although the stakeout didn’t help with the case, they did see a shadowy man (later revealed to be Hugo) meeting with Wayan and Bambang Rahardjo.

Robertson managed to rearrange his date with Leah and, after claiming he once ran a restaurant in Paris, took her for a picnic on the beach. He began dropping hints to Hugo, Xavier and Gina that he thought the teens were lying to him and Xavier eventually changed his statement and admitted he never saw Charlie or Ruby that night. He arrested Ruby and got her to withdraw her alibi as well. After organising searches of Charlie’s house and Ross’ room, he prepared to charge both Charlie and Ruby over the murder until Ross appeared and confessed: He met Grant to warn him off and stabbed him in a rage. Robertson revealed he had realised early on Ross was the killer but wanted him to confess to make things easier for himself. He now intended to contact Grant’s victims to get statements as mitigation. He apologised to Angelo for interfering in his investigation and wished him luck.

When Robertson’s comment to Leah about not being a lawyer contradicted what he’d told Irene, Leah began to work out that he’d been telling tall stories and was upset that he’d lied to her. Robertson admitted the deceptions he used as part of his work had got out of hand and told her the real story behind his name: He was named after a member of the band that was playing when his parents first met at Woodstock. He gave her a copy of the picture he’d mentioned as a parting gift and received a kiss in exchange.

He returned to town a year later to investigate the disappearance of Penn Graham, bringing with him a trainee detective and childhood prodigy, Graves, who he’d christened “Doogie”. He hoped to renew his acquaintance with Leah but discovered she was in Africa visiting Elijah. He checked out Penn’s motel room, where some blood had been found, throwing the local police out, and discovered some sequins. He asked Colleen for local information and quickly identified Alf as his main suspect. He quickly began antagonising people, upsetting Nicole and Xavier by bringing up Roman and Hugo’s brushes with the law. Charlie told him about Alf having an affair with Penn’s mother Tulip and he arranged a warrant to search Nicole’s room for sequins but found none that matched.

He began questioning most of the town, including Miles, Angelo, Will and Sid, and learned Alf had declared his intention to kill Penn. He was puzzled when Graves took a long time getting coffees until he saw Dexter trying to chat her up. He and Graves organised a stakeout of Tulip’s grave and saw Alf visit it, exposing his lie about not knowing her. When reports showed Penn couldn’t have survived the blood loss indicated, Robertson made the enquiry a murder investigation. He asked Marilyn for a tarot card reading and she let slip she’d had a dream about Alf killing Penn. He got Graves to take Dexter out on a double date with Romeo and Indigo to get information about Nicole. Frustrated by the lack of progress, he got angry when Charlie questioned his methods and had her taken off the case.

He was asked by the federal police to interview Roo about Martha and Hugo. He then met Leah again, only for her to immediately decide to return to Africa when she heard Elijah had been injured. He told Miles that without a body his investigation was at a dead end and, if Miles convinced Leah to let him go instead, he’d file a report saying there was no more evidence and the investigation would be scaled down. As a result, he was recalled to the city but on the day he was supposed to go, Penn’s body was found on the beach, having been stabbed.

Robertson looked at the bait shop’s knife inventory and asked Alf about a Mezakano fishing knife. Alf said he’d never had one in stock but his supplier disagreed. He began to suggest Alf and Will had killed Penn together, since Alf gave Will a job at the bait shop straight afterwards. Leah was upset that he had used their private conversations to gather evidence and told him to stay away from her and VJ. Roo asked him to leave Alf alone but he simply told her to get Alf to confess.

When VJ and Lily went missing, Robertson involved himself in the case. He and Graves managed to track down Gary, the man who had given them a lift, and Graves found the pair hiding near where Gary had last seen them. Lily mentioned Will had told her he’d done something bad. Robertson questioned Will, who said he’d been talking about cheating on Gypsy. Leah visited Robertson to say she understood he was doing his job and kissed him.

Robertson organised a search of the bait shop which turned up an apron stained with both Alf and Penn’s blood. He brought in Will and bullied him about the fact Lily would be left in foster care if he went to jail as an accessory, prompting Will to admit he’d seen Alf washing blood off his hands the morning after the murder and say he thought Alf was the killer. With his statement, Robertson arrested Alf.

Six weeks later, Robertson attended both Ross’ wake and Alf’s bail hearing, where Morag had him released into her custody. He tried to talk to Leah about resuming their relationship but she wasn’t sure about him. He insisted to Will he needed him to testify but Morag retaliated by threatening to put Lily on the stand and get her to testify about Will saying he’d done a bad thing.

When Will fled town, Robertson refused to accept Morag’s statement that Will had admitted Alf was innocent and tried to prove Alf was responsible for him leaving. Charlie insisted on reopening the case and tracked down Shandi Palmer, who had been with Will the night of the murder. However, the woman who turned up was a stranger who revealed the Shandi that had come to town was a con artist named Daria Hennessey. With his case unravelling, Robertson lost his temper with Irene for not telling anyone about Will and admitted to Leah he was worried his instincts about Alf were wrong. VJ admitted to getting a text from Lily saying where she and Will were but when Charlie and Robertson checked out the motel they had already moved on.

Robertson interviewed Daria, who had been caught by Charlie and Angelo, and used the fact she’d stolen her combi van from an old boyfriend to keep her in custody. He found the sequins came from one of her skirts and tricked her into admitting she knew what knife had killed Penn. He was still trying to prove Alf was involved but, when Will was also arrested, he and Daria admitted they had gone to Penn’s room the night he died and he had attacked them with the knife, which he had stolen from the bait shop. Will had killed him in self-defence and they’d dumped the body out at sea, hiding the apron with his blood on at the bait shop where Alf used it to clean his hands after a fishing trip. After charging them, an embarrassed Robertson told Alf and Morag the charges against Alf had been dropped.

Robertson met up with Leah, saying he’d been offered a promotion in the city and asked her and VJ to go with him. After considering the idea, Leah told him that she wasn’t ready to move on from Elijah yet and declined.