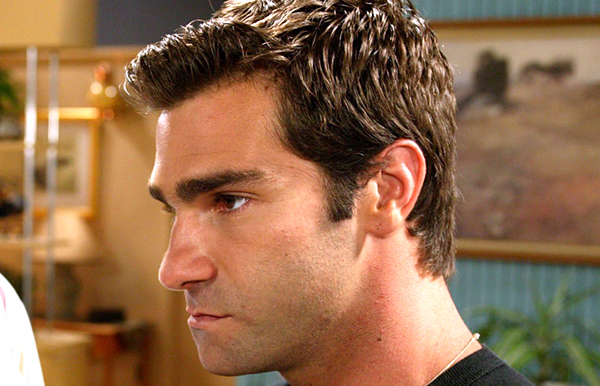 Cam’s first appearance was in episode 4362 when he first met Martha in the surf club. He soon helped her out including kicking out some guys that were hassling her, at the juice bar. They soon got talking and Cam asked Martha out for a drink. Pretty convenient considering she works at a bar! The same evening they kissed at the surf club.

After tension with Tony and other members of her family, Martha quit her job at the surf club. She was soon persuaded to work at the Rocket Club by Cam, who said she could double, even triple the amount of money she was earning before. Her first day at her new job was less than enjoyable as she found out that the bar also had pole dancers. She was less than thrilled about this, but Cam once again managed to persuade her to stay and carry on with her new job.

Cam’s plans for Martha were only just beginning though. He and Cindy told Martha that one of the dancers wouldn’t be able to come in and work one night and could she fill in for her At first Martha was against this because she didn’t feel right about doing it and didn’t want her family to be ashamed of her. Cam told her that as long as she is happy that is all that matters. After some thinking time, Martha changed her mind and said she would dance just for that night.

Peter and the other guys arrived at the Rocket Club but they got a lot more than they bargained for when they saw Martha up onstage. Ric was outraged that Cam would make Martha do such a thing but Cam ‘reassured’ Ric that Martha was doing it because she wanted to. After a few punch-ups, Ric went home. He wasn’t the only one extremely worried about Martha, Jack was too.

It wasn’t long before Alf returned from his trip that he found out about Martha. Lets just say he certainly didn’t approve of Cam and Martha’s relationship and Martha’s new ‘job’.

Now it wasn’t just Martha’s family against him it was his business which was failing too. Jack started to suspect there were drugs in the club. Martha also got suspicious of this too, after she saw someone selling them on to someone else.

Paige, an old colleague of Cam’s, told Martha how he used to go to play squash every week and he took a black bag with him which he used, to take drugs in and out of the club. Martha searched Cam’s bag and found nothing but a squash kit.

Cindy asked Martha to look after her daughter Crystal for an afternoon and she happily agreed, although she didn’t know that she was Cam’s daughter! Cam told Martha that him and Cindy were together a few years back, but that their relationship wasn’t serious. But he would still support them financially. Martha wasn’t happy about the fact he didn’t tell her he had a daughter but she forgave him once again.

Cam started to get into financial difficulty and needed money. He stole some money from the diner to help pay off his debts, but it wasn’t going to be enough. His business was over. After various stuff-ups by himself and other business negotiators, Cam ended up getting rid of the whole problem….by setting fire to the Rocket Club! What he didn’t realise though was that martha had gone looking for him and was trapped inside. After escaping from the burning inferno, Martha and Jack went back to the diner-flat to find Cam leaving. Jack questioned Cam about the black squash bag that supposedly was for carrying his squash kit. Jack held Cam down to the ground while Lara Fitzgerald searched through the bag to find a large amount of money.

Cam was last seen being taken into the Yabbie Creek police station.