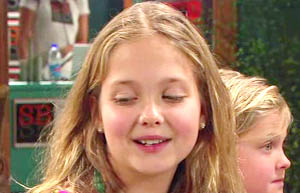 Bree was Kevin Freeman’s eldest daughter who came to the Bay when her father was attempting to reconcile with their step mother Jazz. Drew spoke to Bree in the surf club and she said she was 9 now and Jazz said that she was old enough to go to boarding school. Drew was appalled that his mother was trying to get rid of the girls, like Jazz did when she sent him to boarding school. After sending Bree and her sister to play on the pinball machines, he confronted Kevin about it. After Drew and Kevin had an argument, Kevin was asked to leave the surf club and he took the girls with him.