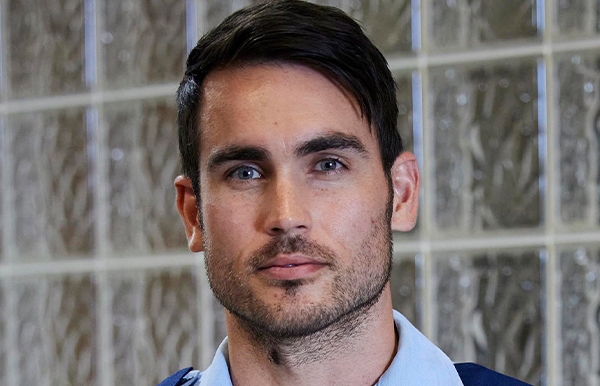 A new senior constable arriving at Yabbie Creek police station in mid-2021, Cash described himself as a country boy. He first became involved with the residents of Summer Bay when he arrested Justin for the assault on Stephen Tennyson, learning of his painkiller addiction. He was willing to release Justin on bail straightaway but agreed with Tori’s decision to keep him in the cells overnight in the hope it would be a wake-up call. Soon after, he had to deal with the discovery of a body in the bay and Dean’s fears it was his missing sister Mackenzie. When the body was identified as Susie McAllister, who had conned several locals a few months earlier, Cash conducting preliminary interviews with John, Justin and Leah. He also interviewed Irene, telling her she was officially a suspect. Mackenzie summoned him to remove Dean from Salt and Cash let Dean go without charge after he explained the situation.

Kieran admitted to him that he hadn’t managed to arrange a sponsor as part of his good behaviour bond, so Cash put him in touch with a local AA group. Cash was assigned to work with Detective Amy Peters when she led the investigation into Susie’s murder. He was uncomfortable with some of her methods, including ambushing Leah and Stephen at Salt for an unofficial interview. They clashed even more when Justin was arrested after Susie’s smashed phone was found in his car. Amy attempted to badger a confession out of Justin without a lawyer present until he collapsed from withdrawals. Cash halted the interview and took Justin to hospital, prompting Amy to warn him not to go against her again.

He became suspicious of Stephen and was proved right when Leah and John found evidence that he was responsible. He fielded questions from Leah, Justin and John about the money Susie had stolen from them. Leah and Justin admitted she had retrieved the money from Stephen’s motel room and Cash collected it, agreeing to keep quiet about where he found it. He was called when Alf and Martha believed Kieran had attacked Jasmine but quickly learned she had actually suffered an epileptic seizure. He approached Jasmine a few days later to remind her of the incident and tried to ask her out, learning her late husband was a police officer. He escorted Nikau home after catching him harassing Bella.

He tried to organise a touch footy team, with Jasmine attending their first practise session. He exaggerated an ankle injury to spend time with her and she agreed to a date. They had dinner together at Salt but he was reluctant to push his luck by asking for a second date. He played referee over John and Justin’s feud over buying the garage and met Jasmine for a drink, but was called away by his sister Felicity, who had got them evicted from their rental by ignoring noise complaints. He found out she had slept with Tane Parata on finding him leaving the house and arranged for himself and Felicity to move to the caravan park.

He was soon receiving complaints about her again and also learned she had told Jasmine their father had been murdered. Cash told Jasmine the truth: Their father had shot himself when their farm was failing and Felicity had never accepted it. He and Jasmine shared a kiss. He pulled over a young man for speeding who turned out to be Leah’s nephew Theo. He learned Felicity was hooking up with Tane again after seeing him sneaking out of her van, then that Tane was accusing Felicity of pestering him with roses and asked her about it. Felicity told him Jasmine was uncomfortable that they hadn’t slept together so he arranged a night at a hotel in the city. However, when he turned up at Salt to collect her, he found her drunk so took her home instead. He learned she was upset about her stepdaughter Grace leaving and wasn’t sure if she should attend Tori and Christian’s wedding. Cash ended up taking her there in his squad car, after which they slept together.

When he returned from some time away, he discovered Felicity was staying with her friend Anne Sherman and had been having further troubles with Tane, who he served with an AVO to stay away from her. However, his resolve was shaken when the mental health fundraiser at Salt was flooded with organophosphate that had been used in an attempt to murder Tane, with Cash placing the restaurant in lockdown until they had gone through decontamination. He worried Felicity would be the main suspect and told her to get her story straight. Jasmine found a receipt for organophosphate in her caravan and Cash confronted her over it. Looking into it, he found it had been ordered online with a pre-paid card and delivered to an empty house. He burned the receipt but had to take part in a search of Felicity’s van which found samples of the drug used to knock out Tane. Felicity told him Anne was responsible. Although sceptical, Cash reported it to Detective Darren Nasser but Darren still considered Felicity, who had disappeared, the prime suspect. Cash went back to their home town to look for her without success, then learned Tane was missing as well. He managed to track Felicity’s phone and he and Ari rescued Felicity and Tane just as Anne was about to kill them both. However, Felicity was still upset that he hadn’t believed her. He tried to warn Tane off spending time with her but later acknowledged it was good for her to have someone to talk to.

He interrupted Ryder and Theo firewalking, which contributed to them burning their feet. He tried to convince Felicity to join him at a memorial for their father, which he’d attended without her every year. Felicity said she’d go if he investigated their father’s death but Cash considered it pointless so went without her, asking Jasmine and Tane to keep an eye on her. When he returned, he brought the autopsy report on their father’s death with him as proof for Felicity, allowing them to talk things over. Back on duty, he pursued Mia when she drove off after being pulled over. When the car was eventually stopped, Cash found a body in the boot: Matthew Montgomery, Chloe’s father. He arrested Mia when she refused to explain but let her go after Ari (falsely) confessed to killing Matthew.

Alf tried to get him to charge Theo with attempted murder after a challenge where Ryder was buried alive in a coffin but Cash dismissed the claim since Ryder had been a willing participant. However, he failed to talk Alf out of pressing charges over Theo taking the surf club buggy for a joyride. He surprised Jasmine with a birthday dinner which initially had her running away before she explained she’d always been upset that her father, who abandoned her as a child, never got in touch on her birthday. However, they ended up going away to the city together to celebrate. Shortly after their return, he intervened when Neve Spicer attacked Mackenzie at the surf club, then beat a sharp exit when Jasmine invited him to move in with her. He told her he didn’t want to leave Felicity bnt Felicity told him not to use her as an excuse. He and Jasmine eventually decided to put it on hold. Soon after, when Ari died and he saw how well Felicity handled it, he changed his mind and asked Irene for the key to move in but she refused without him talking to Jasmine. In the end, Jasmine readily agreed.

Cash began to regret it when he found it hard to relax around Irene, especially when bumping into her half-dressed in the middle of the night, but some straight-talking from her improved things. He had to break the news to Jasmine that her father had died, which Jasmine initially didn’t react to, although he ended up supporting her, especially when her half-brother Xander turned up and revealed their dad had had another family after leaving her. Cash had an early run-in with Jasmine’s newly-discovered stepsister Rose when he tried to caution her about tackling a robber at the Diner only to learn she was a police officer, and filled her in on their father abandoning Jasmine. He helped smooth things over between the siblings after an awkward lunch, suggesting they go for a walk on the beach instead. Rose spoke to him about getting a transfer to Summer Bay. He stumbled across Theo’s father Dimitri trying to force him into his car and took them to the station, where Leah reported Dimitri for assaulting Justin, and Theo reported him for physically abusing him.

On his first day working with Rose, they pulled Alf over for speeding but Cash let him off, knowing he was going to pick up Martha from hospital. He refused to look into a mysterious “PK” that Felicity said was hanging around the restaurant and investigated a fatal car crash Logan had been involved in. Xander told him and Rose that Millie, the other driver, had been distracted looking at her phone but when Millie denied it and accused Xander of harassing her, and Cash learned Rose had kept quiet about Xander being accused of similar before, he took Rose off the case, although Millie soon confessed. Rose convinced him to take the situation with PK seriously especially when they found PK, real name Peter King, murdered. They questioned Felicity, Dean, Mackenzie and PK’s associate Nathan Silva, focusing on Dean when he and Ziggy lied about being together and a blood-covered wrench was found in the car he was using. When the wrench was confirmed as the murder weapon, Cash wanted to arrest Dean until Dean produced Nathan as the real culprit.

Nathan revealed Felicity had been running illegal poker nights at Salt, leaving Cash with no choice but to arrest her. However, Mackenzie interrupted, saying she had organised the nights and Felicity had believed they had a license. Cash rightly suspected that wasn’t entirely true but Felicity escaped without charge. Cash joined her at a Parata barbecue where he got drunk and arranged to meet Rose at Salt, ending up being thrown out by Mackenzie. He fell asleep with Rose in her car after refusing to go home to Jasmine drunk. Even though nothing had happened, he told Felicity and Rose to keep it from Jasmine. Jasmine then left town to help out on her in-laws’ farm when her mother-in-law Wendy had a heart attack. Rose asked if there was a reason he’d kept things quiet and he realised she was attracted to him. She denied it but things were now awkward, with Rose trying to avoid being rostered on with him. Cash talked Mackenzie into accepting Felicity’s offer to buy half of Salt and accepted Xander’s offer to join him and Rose for lunch only for Rose to bring along her new boyfriend Tex Wheeler and flaunt the relationship. Cash agreed to give them space.