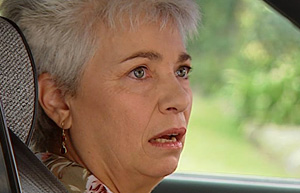 Following the visit of her sister, Kate O’Connor, Margaret Bradley phoned the girls house to speak to Shauna. However, she managed only to get Leah, who was late at passing the message on and by that time Margaret was on her way to Summer Bay.

It appeared that it was just a regular mother checking up on her daughter visit, however just before she left, Shauna questioned why she had been treated differently to the other kids and why there were no pictures of her, Margaret stormed away.

However, she was back later that day where she told Shauna that she wasn’t her birth mother, but did not reveal who was Shauna’s mother, though Shauna soon found out it was Ailsa.