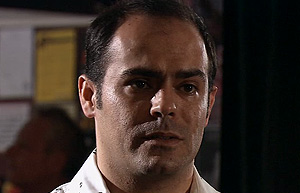 Steve was a regular customer of The Rocket Club who took an interest in Martha and took the blame for her when she had smashed some glasses. He then gave her a tip at the end of the night, much to Cindy’s annoyance, and asked when she would be working next. She was unexpectedly called in the next day and Steve was pleased to see her there. He was in the bar with some friends and told them to ‘watch and learn’ and he attempted to chat her up. Later in the evening, Steve was drunk and called her back over to them. He attempted to make her sit on his knee but Martha told him to get off her and Cindy remined him of the rules. Later, Steve said he wanted to make it up with Martha but she didn’t want to know and threw beer in his face. Steve then got very aggressive so bouncers kicked him out while he shouted abuse at Martha.

Later that night, when Martha was taking the rubbish out, Steve cornered her and said that she shouldn’t have led him on. He then attempted to assault her but Cam arrived just in time and saved her. He then threw Steve out and threatened to call the cops. The next day, Steve turned up at the club and tried to apologise for being an idiot. Martha wasn’t keen but decided to give him a chance and this prevented him from being barred from the club. It then appeared Cam set up the apology as part of his plan to manipulate Martha.