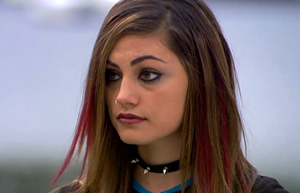 Adrian was the pet shop assistant with interesting ideas about make-up who Dexter met while looking for a pet. She was pleased to meet him, since she’d been wondering where all the strange people in town were. When Dexter told her he was looking for a pet that would give him a lot of love but wouldn’t require much looking after, she pointed him towards a goldfish, which he named Marilyn.

A few days later, Dexter brought the fish back in wanting to return it, saying it didn’t love him. After Adrian reminded him of fishes’ short lifespans, he decided not to abandon her and ended up arranging to go out with Adrian. Chatting on the pier, she told him she was an emo not a goth but admitted that she wasn’t sure of the difference except that emos were more contemporary. On learning he had named the fish after Marilyn Chambers, who he had a crush on, she pointed out he had transferred his feelings for the person onto the fish. On learning her name, Dexter invited her back to his place to watch Rocky and, after initially being bemused at going back to his place on a first date, she agreed.

Dexter met up with Adrian again when he went to the shop to get supplies for the fish, who he had now renamed MacGyver. He was slightly thrown that she thought they were a couple but took her to the surf club anyway. They got on but when she began flirting with him and suggesting that his offer to feed his fish together was a euphemism he got confused and ran off to ask Indi for advice. Adrian asked Alf about Dexter and Alf told her he was one of a kind. By the time Dexter returned with Indi and Romeo, Adrian had disappeared, leaving a note with Alf telling him not to call her.

She felt sorry for Dexter however when he came to the shop after being to Mitzy’s funeral. After going to the Diner, she told him her parents had died when she was twelve and she blamed herself. Dexter apologised for running out on her and they shared a kiss. Dexter suggested she worked at the pet shop because she knew any attachments she formed were short term. However, when Adrian analysed him in turn and suggested that he acted strange so people would leave him alone because his heart had been broken in the past, Dexter got uncomfortable and walked out on her again.

Adrian avoided Dexter’s calls until he caught up with her on the pier, presenting her with flowers and a heartfelt speech. She met him at the Diner and he seemed to be winning her over, telling her he walked out on her because he was scared, until April came in looking for Xavier. Dexter introduced April and Adrian to each other and explained April had told him what to say, prompting Adrian to storm out telling him to never e-mail her, message her or come to the shop. When Dexter related the incident to Marilyn and Sid, Marilyn suggested that Adrian wasn’t really interested in him and was looking for excuses to break up. Dexter asked Adrian if she was into him or not and she admitted she wasn’t. Dexter asked what the chances were, on a scale of one to five, of them being friends and Adrian told him two and a half.