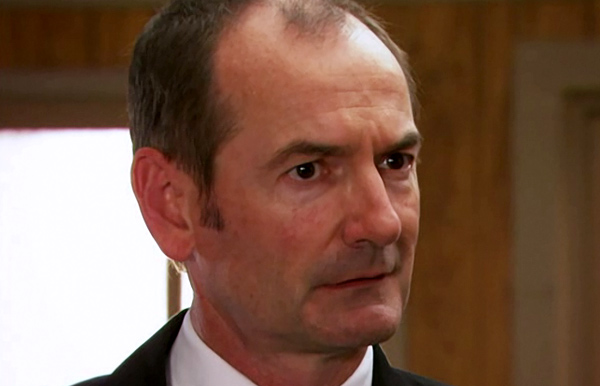 Gordon Eaves came to Summer Bay to supervise the search for Hugo, after Killer, the assassin sent after him by the people smugglers, was arrested. He went with Angelo to the farm to talk to Martha where he asked her a number of personal questions about her involvement with Hugo. Unknown to them, Hugo was listening in on the conversation and after the pair had gone he told Martha that he recognised Eaves’ voice: Eaves had been the inside man for the people smuggling operation.

Back at the station, Eaves asked to see Killer and promptly shot him dead, claiming self-defence. He wanted to go back to the farm but, having received a message from Martha telling him about Eaves’ true loyalties, Angelo insisted on keeping Eaves at the station while the shooting was investigated. Eaves got hold of a warrant to search the farmhouse and insisted Angelo drive him there, also demanding Angelo hand over his gun. When Charlie phoned Angelo while they were en route, Eaves became suspicious and threw Angelo’s phone out of the window.

When they arrived at the farm and found Charlie’s car already there, Eaves dropped the pretence, holding Angelo at gunpoint and heading for the farmhouse. However, he was distracted by Hugo, who set off the police car’s siren, and Angelo got away from him after a brief struggle. Angelo tried to stop Eaves by tipping barrels onto him but Eaves was about to shoot him when he was knocked down by Hugo. However, he recovered quickly and shot Hugo in the leg before being driven off by Charlie.

Having got Hugo to the relative safety of the farmhouse, Charlie and Angelo began a game of cat and mouse with Eaves around the farm. At one point, Eaves managed to hold Charlie at gunpoint but she and Angelo arranged a charade where Angelo drove off on a motorbike with a scarecrow on the back. Eaves fired at the scarecrow, allowing Charlie to knock him down. He managed to retrieve a second gun but before he could use it he was knocked down by Tony for the last time. Charlie and Angelo took him back to the station under arrest with Angelo planning to offer him protection in return for testifying against his employers.