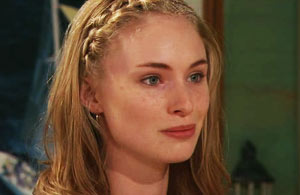 The first caller to Cassie’s helpline that she set up in the wake of ordeal at the palms of Macca. Unfortunately, Erin was pranking the helpline and laughed at Bryan, who was answering the call.

When Matilda and Cassie go to the diner for their lunch, Erin revealed that it was her that had made the prank call and then told Cassie what she thought of the helpline and Cassie, or Turner as Erin called her. Neither were particularly praising.