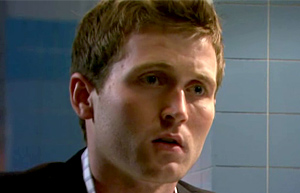 David was the husband of Hayley Doven, who had arrived at Northern District Hospital after going into premature labour. David was out of town at the time and it would take him several hours to get home. When he finally arrived at the hospital, Sid had to inform him that Hayley had died of a postpartum haemmorhage after giving birth to a healthy baby boy.

Though credited as David Stone, David’s surname was given as Egan in the episode.