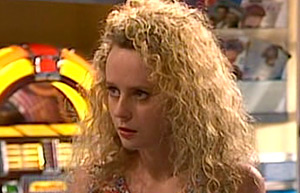 Leanne met Martin on a blind date and the two became an item but Lance didn’t think she was good enough for Matin. Leanne asked Celia to help her be a Lady to win Martin over but somehow a roumer started that they were getting engaged and a scared Martin tried to put her off from wanting to marry him. His attempts worked so Leanne decided to revert back to being herself in order to put him off. The result was though that Martin fell for her again and their relationship was back on.

Matt discovered that she couldn’t read and began the slow process of trying to teach her but Martin’s jealousy caused their relationship to break down. She started seeing a biker called Meat-Axe who challenged Martin to a fight and beat him up. Leanne left the bay again with Meat-Axe.