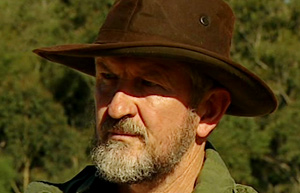 When Hayley and Noah were bathing at a water hole, they were surprised by Leo, a local farmer, who was accompanied by two vicious dogs and told them they were on private property and to get off. He asked if they’d seen a kid but wouldn’t give any more details. Hayley and Noah noticed the kid in question, Toni, hiding in their car but drove off without saying anything. Leo saw Toni in the car and then witnessed Toni telling Noah to stop before running off into the bush, but he abandoned his pursuit.

When Toni came to the attention of the Sutherlands, Shelley went to see Leo who claimed not to know Toni. Leo later turned up at the house and asked Rhys and Shelley what it would take for a child to be taken away. Shelley was unable to answer except in general terms and, after denying Toni was his son, Leo abruptly walked out. However, Toni, who had been hiding in the caravan park and spotted Leo’s arrival, had let down his tyre to slow him down, before heading back to the farm to fetch some belongings. Leo arrived home just as Toni was leaving, and tried to convince the child to stay with him but when Noah appeared on his bike Toni jumped on the back with him and rode away.

After everyone realised that Toni was a girl, Shelley went to see Leo, who was initially unco-operative until Shelley asked why she was pretending to be a boy. Leo revealed that Toni was his granddaughter and admitted that Toni had told him that his son John, her father, was abusing her. He had initially refused to believe it but now wanted to help. However, Toni was now too scared to trust him. Shelley took Leo back to the caravan park for a reunion with Toni where he managed to convince the girl he was on her side.

When John snatched Toni from the caravan park, Shelley called Leo who cut off John’s car in his ute, allowing Rhys to catch up with them. With Leo willing to make a statement against him, John was charged. However, Leo didn’t feel able to look after Toni himself so the child was taken into foster care, with Leo promising to stay in touch.