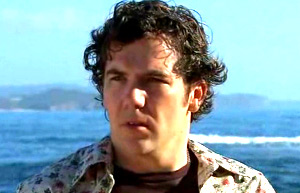 Ethan Black was Kelli Vale’s partner in crime basically. Ethan’s first job was to write a note from ‘Jeremy’ and send it with some flowers to Amanda’s house. Kelli got Ethan to do this so that Peter would think Amanda was cheating on him.

When Amanda’s car broke down in the middle of no where, Ethan offered to fix it. He also asked her if she would like to have dinner with him. Amanda declined but said that in another set of circumstances she would have said yes. Ethan gave her his name and address details in case she changed her mind.

At Peter and Amanda’s engagement party, Ethan showed up as one of the caterers. Amanda was on edge most of the night because Peter didn’t know the Ethan had asked her out on a date. He found out that Ethan had fixed her car later that evening.

The day after, Ethan showed up at Amanda’s house again and told Peter that he had asked Amanda out. Peter and Amanda got into and argument so Amanda went to Noah’s Bar to think about things. She had a few drinks and was pretty out of it, but that was before Ethan drugged her and the two of them ended up spending the night together!

The next morning, Amanda told Ethan that what happened shouldn’t have. She left the motel and went back to her mansion to see Peter. But that wasn’t the end of it, Kelli had got Ethan to take photos of him and Amanda together so she could ruin Amanda’s relationship with Peter.

Ethan’s next bribe was to get Amanda to steal morphine from the hospital. She did, and met up with him so that it could be sold on. Kelli went with her but stayed in the car so she couldn’t be seen. Ethan noticed that someone else was in the car before Amanda started to run back to it and drive off. As she did so she dragged Ethan alongside the car! He hit the ground, and Kelli got out to check him but she told Amanda that she couldn’t find a pulse. Ethan gave a quick smirk while still on the ground before Kelli ran back to Amanda and drove off.

Later that evening, Kelli returned to where Ethan ‘died’ and congratulated him on doing such a convincing job earlier that day. Kelli’s next plan for Ethan was to have him ‘pop-up’ in various places so as to freak out Amanda. Amanda was truly terrified when she saw ‘Ethan’ and thought she was going mad!

Ethan accidentally killed Clyde, one of the people that helped kidnap Belle. They got into a scuffle and he hit his head. Ethan needed to get rid of some evidence that would of linked Kelli to the kidnapping so Ethan drove Clyde’s car off the cliff along with the evidence and Clyde!

Amanda found out that Ethan was still alive, when he was caught speeding and brought into the police station. Ethan let Amanda know that he had plans for her and that it wasn’t over yet.

Ethan continued to blackmail Amanda, this time by asking for $75,000 otherwise Peter would be given the photos. Amanda and Kelli went to Ethan’s motel and destroyed the photos, but Ethan came along and saw what they were doing. He tried to stop them but it was too late the photos were burnt. But of course he had made copies!

Kitty Vale, showed up a few days before Peter and Amanda’s wedding because her business in the west end was failing because she didn’t have any money. After finding out about her daughters plans for Amanda, Kitty was bribed into taking the money that she needed as long as she didn’t say anything to Amanda. Ethan and Kitty met up and he paid her off. He also made sure that Kitty wouldn’t breathe a word of what Kelli had planed to anyone. She agreed and left with the money.

The wedding arrived and Ethan showed up just as the ceremony was finished. He asked everyone to look underneath their seats, much to everyone’s disgust the guests found pictures of Amanda and Ethan together!

After a near punch with Dan and even a slap from Kelli, Ethan’s work was done, until Kelli needed help with the last part of her plan. She wanted Ethan to crash Amanda’s car!

Ethan thought that by helping Kelli ruin her sisters life, they would be going to Thailand to start a new life together. Kelli told Ethan that she had booked the tickets but he found out that she hadn’t. Ethan didn’t want to be a part of Kelli’s plan anymore. Amanda overheard everything, that was when she found out that her sister was the one responsible for everything. Kelli ran after her after decking Ethan and leaving him at Amanda’s house.

While Kelli was pouring petrol over her sisters car, she told her that Ethan didn’t really spend the whole night with her he just made her think that she did by taking pictures of them together. Ethan eventually told the police what Kelli had planned for Amanda.