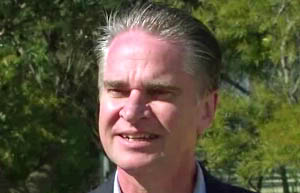 Tim was a Coach from the city who came to watch Geoff Campbell play rugby with a view to selecting him for his team. The match wasn’t going well as Geoff was distracted with family issues. Tim said that he could see Geoff had potential but he needed someone who could handle the pressure and not worry about anything else that maybe on their mind.

Tim was about to leave at half time but Alf persuaded him to stay while Tony went to get Bruce Campbell in the hope that having him there would inspire Geoff. Bruce’s presence did the trick as Geoff turned his performance around and impressed Tim with his play. After the match Geoff was introduced to Tim who told him that he’d turned defeat into victory and, because of that, wanted him to play at 5/8th for his team in the city. Geoff was thrilled when he heard the news, as were his ‘supporters’ Bruce, Tony and Alf.