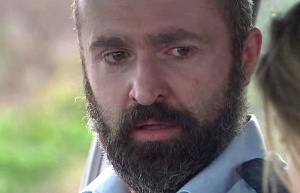 This rather dour Priest first came to our attention as the leader of the congregation to which Geoff, Annie and their Grandfather belonged. Geoff and Annie idolised him and often went to him for support and advice. After Bruce Campbell’s death Geoff and Annie turned on Martha and Michael and it was revealed that the judgemental Reverend Hall was the reason why.

He presided over the wedding of Jack and Sam and met them at several occasions, reminding them about the sanctity of marriage and preaching to them. During the hospital stalker incidents he was supportive of the women in the town and even escorted Rachel home one night causing her to tell him she felt safe with him. He thanked her by turning on her and holding her hostage.

In a series of deranged rants he tied her up and admitted that he was the hospital attacker and that it was his way at getting back at ‘loose’ women. Rachel was his target because of her lost baby. She tried to reason with him but he became increasingly irate and lost his temper with her. Managing to free herself Rachel fought him off but Reverend Hall fell and hit his head. Whilst fitting on the floor Rachel put aside her personal feelings to treat him.

At hospital she admitted she thought he had a brain tumour and her diagnosis was confirmed. Hearing his story Morag offered to represent him at trial but a picture publicised by Belle saw him vilified by the town and removed from his job. Geoff visited him in hospital and Reverend Hall was able to persuade him to loosen off his bonds. He later escaped from hospital by knocking the police guard out and stealing his uniform.

Tracked down to the lookout by Annie, she tried to convince him not to end his life but he became convinced instead that he needed to save her innocence. As he prepared to drive the car off the cliff though Roman and Geoff intervened and Roman tackled Reverend Hall to the ground, keeping him there until Jack arrived.

Back in hospital Reverend Hall apologised to Annie and Geoff and went in for his operation to remove his tumour. Though it was initially a success, complications left him brain dead and the decision was made to switch off his life support. He left his bible to Annie and Geoff but his death was the trigger that caused Annie to lose faith.